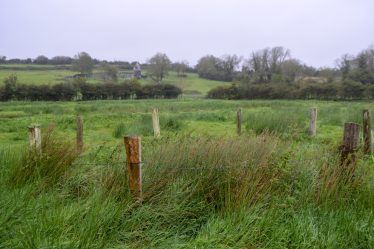 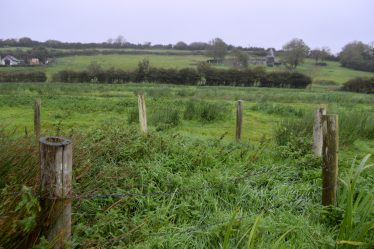 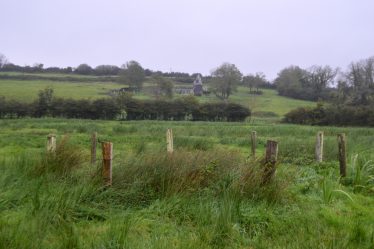 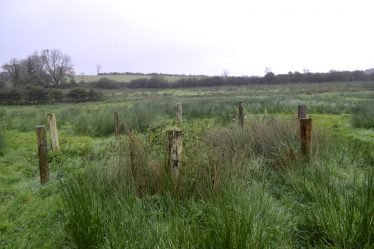 Tobernatasha or Tobar na Taise means the ‘Well of the Relic’. This well lies in a damp grazing field parallel to the main Ennis- Inagh road. The well is one of two holy wells which lie to the south of a 15th century church and graveyard. The other is St. Laictín’s Holy Well. Old photos of the holy well show a very fine inscribed crucifixion stone and this is still visible beneath the undergrowth.
Writing as part of his work with the Ordnance Survey in 1839, John O’ Donovan noted:

‘Another Holy Well called Tobar-na-Taise, i.e., the Well of the Relic, lies a short distance to the southwest, shaped like a coffin in which delicate children are laid on the back as if in a coffin for the restoration of their health.

No evidence of the coffin-like template mentioned by O’Donovan can be spotted today.

T.J. Westropp, writing on the folklore and customs of County Clare, reported that Tobernatasha was popular amongst mothers whose children were ill.

This well takes its name from the relic bone of Saint Laictín which was once held in a specially designed 12th century casket at Kilnamona.  During the Middle Ages, relics associated with saints were sometimes used for protection in battle or when swearing solemn oaths. The casket in which the relic bone of Saint Laictín was held was in the shape of an arm with clenched fist. The casket found its way to Donoughmore, Cork and can now be seen at the National Museum of Ireland, Archaeology, in Dublin.

The well has been fenced off to prevent animal damage. It is substantially overgrown.

Inagh Village is north of the well site and Ennis Town is roughly 8 kilometres away.

The History of Kilnamona