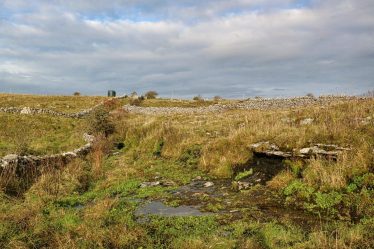 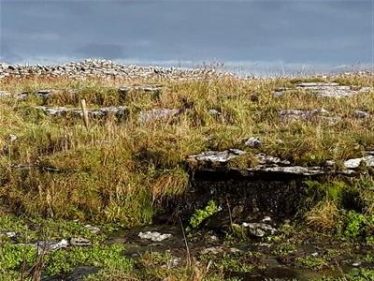 This well is situated in a limestone pavement expanse in the uplands of the Burren. There are lavish views to the south. The well is very near the junction of a boreen and a minor road. There is a penitential ascent along the boreen for any pilgrims coming from a southerly direction.

At the well site, the water comes from a 1 metre high, stepped limestone bench. The bench is 15-20 metres long, with the main flow concentrated in a couple of areas. The water drains under the boreen into a boggy area at the head of a valley descending to the south-west.

Paul Gosling writes that 3 kilometres north-east of the well site, along the minor road, there is an ancient north-south artery route through the Burren, passing though Carran and ending at Bell Harbour. The modern regional road, the R480, is located 2 kilometres away.

Tobar Derg translates as ‘The Red Well’. The name is derived from the red hue of the water.
The singular red colour of the water is caused by a freshwater algae, Hildenbrandia rivularis.
Most freshwater algae prefer an environment of running water. However, H. rivularis prefers sites like this with still, shady water.
In the past, Tobar Derg was resorted to for as a cure for rheumatism. Rheumatism is any disease marked by inflammation and pain in the joints, muscles or fibrous tissue. The waters of the well were also traditionally used for the secular purpose of dyeing fabrics. Fabrics would have been soaked in the coloured water in order to dye them.

It is possible that the colour of the water may have inspired the local folk belief that Tobar Derg was a bloody well and that a bloody act took place at the site. For example, Saint Arilda’s Well in Gloucester, England, is said to be red with the saint’s blood, commemorating her martyrdom by beheading. The same algae, Hildenbrandia rivularis grows at Saint Arilda’s Well and colours the water there also.

There were no offerings present at the well at the time of the research visit. References to the well in historical records is very scant and it is not known when practice at the holy well declined.

The well lies in an area of limestone pavement and thin soil. This is an EU Priority Habitat with Burren speciality flowers in spring and summer and grazed by cattle through the autumn and winter

Caherconell Stone Fort, which has a café, is just two kilometres to the west on the R480. Poulabrone Portal Tomb is also in the vicinity of the holy well.