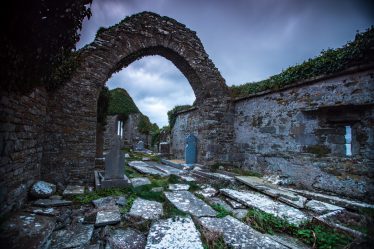 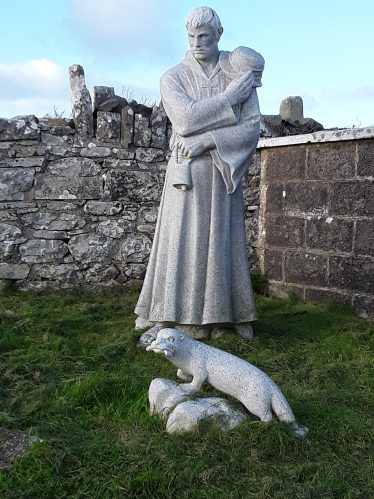 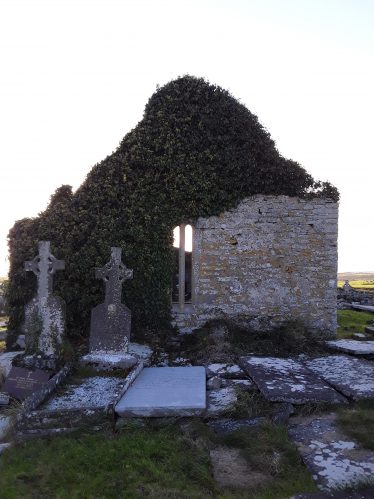 The holy well was part of the Kilmacreehy Ecclesiastical Site, which is located on a low slope on the northern shores of Liscannor Bay. Averil Swinfin writes that the church ruins, consisting of a nave and chancel, are dated to the 15th century. However, the overall site at Kilmacreehy has been idenitified as being an early historic in origin. The holy well no longer exists. It was removed during the course of land reclamation. A local historian, Martina Mc Carthy, wrote a dissertation on Kilmacreehy in 1998 and recorded that by that time, ‘the well was long gone’.
Records from the Ordnance Survey Letters in record that visits to the holy well had ceased by the 1830s:
‘….his well lies a furlong (200m) to the north west, now neglected and unfrequented, though formerly in great repute.’

Today, the rocky beach is used for amenity by some walkers. Three rocks that protrude in the sand in a low springtide are known as ‘The Saint’s Bed’. The folk belief is that St Mac Creehy died at Kilmacreehy and was buried at these three rocks.

Tobermacreehy comes from the Irish ‘Tobar Mac Creiche’ meaning Saint Macreehy’s Well. Máire McNeill writes that Saint Macreehy is a very shadowy person historically, but is very interesting when the legends that surround the saint are taken into account. The pattern date at the holy well was 2nd August, the feast day of Saint Macreehy, and this feast day seems to have merged with the pre-Christian Lughnasa celebrations at Saint Brigid’s Well, 4 kilometres west of Kilmacreehy.

According to folklorist Seán Mac Mathúna (1876-1949), old people used to make rounds at the well, graveyard and church, and take a fistful of sand from the graveyard. The sand was renowned for calming any storm at which it was thrown.

Similarly, the father and aunts of Martina Mc Carthy talked about going to Kilmacreehy on 2nd August when they were younger. The Ordnance Survey Letters, 1839 record that the well was said to hold a cure for ‘diseases of the eyes and other diseases’

The well is located on a rocky beach (a storm beach) on the shore line and may be interesting in terms of marine bio-diversity. The land around the site is intensively managed farm land and is of little bio-diversity value.

At the church near the holy well, there is a sculpture of a corpse-eating eel.
According to legend, Macreehy overwhelmed the monster eel which had come in from the sea to eat corpses in the cemetery. There is no record of any custom associated with this sculpture.