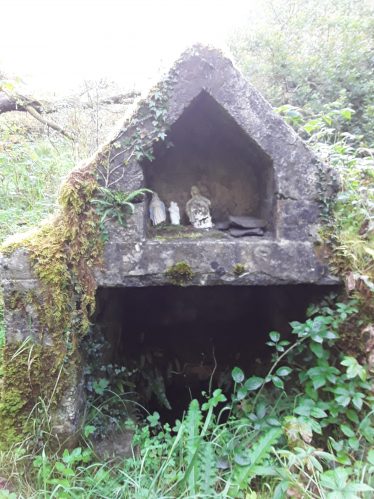 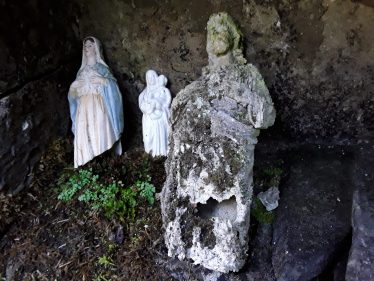 This holy well is located at the end of  cul-de-sac off the R460 running from Inagh to Miltown Malbay. It is in a small area of green land, approximately 1 kilometre square, that is completely surrounded by commercial evergreen forestry. The well is in the north-western corner of this green area. There is a cillín about 100 metres south of the well. A dwelling and outbuildings are a further 100 metres south of the cillín. The area lies between two lakes. Drumcullaun Lough is about 0.5 kilometres to the north-east and Lough Caum is a similar distance to the south. The Cullenagh River, which flows through Drumcallaun, is only a couple of hundred metres north of the well.

This holy well is named after the townland, even though it is recorded in the National Folklore Collection as being blessed by Saint Flannan, also known as Saint Flannan of Killaloe.

The most frequented well in Inagh was Saint Flannan’s Well in Drumanure. It is still visited today on his feast date, 18th December. Pádraig O Riain writes that Saint Flannan is thought to be a member of a leading branch of the Dál gCais, a clan which also produced Brian Ború. Another local dedication to Flannan is the church known as Killaspuglonane, from the Irish ‘Ceall Easpaig Fhlannáin’ (Lonáin). It is located near Ennistymon.

The National Folklore Collection, 1930s state that rounds were carried out at the well and the cillín.
‘People go there on two Thursdays and a Sunday. They say five “Our Fathers” five “Hail Marys” and five “Glory be to the Fathers” at the well. They go around five times and say “Our Father” and ten Hail Marys and the same at the graveyard’.

Offerings at the well are also recorded in the Irish Folklore Collection:
‘… pictures, medals, statues, pins, pennies and cups (at) are left to take some water. When anybody goes to the well it is said that they leave something after them so that they would not take any disease’.

As well as the pattern day or visitation:
‘If a person went on 18th of December he would not have to go anymore” “people perform rounds to it on that day’.

The well was said to hold a cure for sore eyes and sore feet. The National Folklore collection states that James Wynne ,Cloonanaha had his eyes cured at the well.

The Irish Folklore Collection, Schools’ Collection describes the cillín near the holy well‘…children were buried in it some some years ago…..There are two big trees growing in the grave-yard and the grave of the saint is in the middle of it on the top of the hill.’