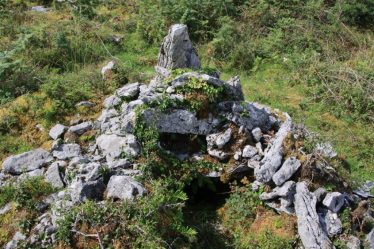 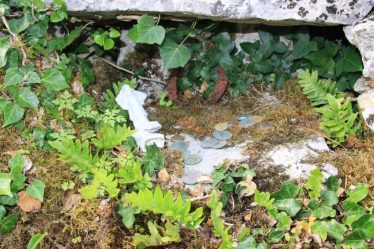 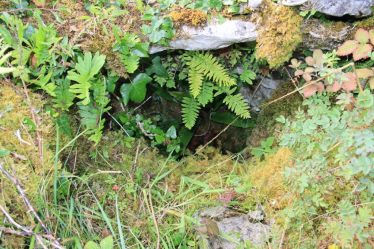 Caherfadda, from the Irish ‘Ceathrú Fada’, which translates as ‘The Long Quarter’ or ‘The Long Townland’.

This holy well is in a remote area about 2 kilometres north of the R476 road. The well house is a V-shaped drystone construction, with the two sides fanning out from the well, allowing for wide access. The altar is made of a flagstone inserted in to the dry stone. It is directly above the water and is the focal point for offerings. Scrub is encroaching on the well and if this continues, it will eventually hide the monument.

There is no pattern day recorded for this holy well. Tobaradubh translates as ‘The Black Well’. Records in the Ordnance Survey Letters, 1839 note:
‘This Well has its name (the Well of the Black) from a black miry sediment which is found at its bottom, and is used by the peasantry for colouring wool, as well as for applying to swellings of the eyes and limbs. I know other places that produce this dye stuff, but they are not held in any sanctified regard, nor do I think this Well has any better claim to the name of Holy.’

The sediment is, in fact, partly decayed organic matter.
The Ordnance Survey ‘Name Books’ refer to the well as ‘Tobar Eidrigg’, which may be a corruption of ‘Tobar Éadaigh’, i.e. The Clothes Well. One source in the Irish Folklore Collection, refers to the well as Saint Joseph’s Well, but this could be in error. (Volume 0614, Page 342).

National Folklore Collection, Schools’ Collection:
‘In Caherfadda there is a holy well called St Joseph’s well. It is a cure for sore eyes. People pay rounds there on Mondays and Thursdays. To be cured one must go three times around the well saying one Our Father and five Hail Marys. One must leave something at the well after them’.
-Told by Thomas Cassidy, Ballycashen; collected by his daughter Nora Cassidy. (IFC 1937/38).

T.J. Westropp, writing in ‘A Folklore Survey of County Clare’ in the early 1900s, recorded:
‘The black mud which gave its name to Toberduff cured sore eyes and swelled limbs’.

The well is in an area of limestone pavement with Burren speciality flowers blooming in spring and summer. The land is grazed by cattle in autumn and winter.