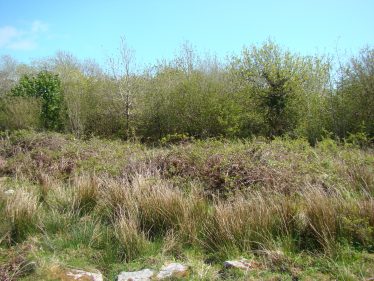 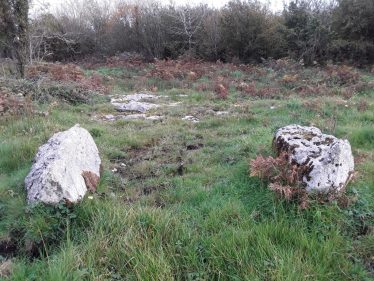 The townland name is from the Irish ‘Tearmann’ which means monastic bounds or sanctuary.
This name references the ecclesiastical site of Temple Cronan. The Eye Well was a part of this site, along with another holy well dedicated to Saint Cronan.

The Eye Well was situated less than 30 metres east of Saint Cronan’s Well, which is also renowned for a cure for eye ailments. Though this holy well no longer exists, records on The National Monuments Service website, www.archaeology.ie, written by Mary Tunny, describe the well as it once stood:
‘It was apparently a simple ‘well’ enclosed by a drystone wall at S with a large upright limestone flag (H 0.96m) bearing no inscription or marking set in the wall on the S side. No votive offerings were apparent and it may not have been a holy well. The area around the well had been cleared of scrub. Further inspection in 2019 revealed no visible remains at this location. A local landowner remembers a small body of water in a solution hole in the limestone with an altar-like slab placed horizontally adjacent. It was covered over at some stage.’

There is no record of a feast day, ritual or offerings at this holy well.
Records in the Ordnance Survey Letters, 1835 mention Saint Cronan’s Well, saying that:
‘stations are performed but no distinct patron day is remembered’.
However, no reference is made to the Eye Well.

Saint Cronan was a localised Saint in North Clare, with dedications at Tuamgraney, Killokennedy and Carran. Cronan’s feast day is 19th October. At Tuamgraney however, the Saint’s Feast Day fell during the harvest, making Tuamgraney a Lughnasa site.
One cannot rule out the possibility that Termon and its two holy wells may have also been a Lughnasa site. Lughnasa was one of four great pre-Christian agricultural festivals in ancient Ireland. The festival survived into Christian times and was modified. Sinéad Ní Gabhláin writes that the presence of two reliquary shrines at Temple Cronan, in the immediate vicinity of church, emphasise the importance of this site in Early Christian times

The well, which no longer exists, was located on area of thin soil with some limestone pavement protruding. Scrub had begun to encroach on the well but this was removed in order to facilitate winter grazing by cattle. There is an extensive marsh area south of wells.
The church and shrines, the core of the monastic site are located in a fertile glacial till valley, 100 metres north-east of Saint Cronan’s Well.

Saint Cronan’s Well and the Eye Well were an intrinsic part of Temple Cronan Monastic Site, which also includes a 12th century church and two rare reliquary shrines. The church and shrines are about 100m north-east of Saint Cronan’s Well. Cassidy’s Pub and  the Burren Perfumery are roughly a kilometre from the holy well site.

Ní Gabhláin, S 1995, ‘Church, Parish and Polity: The Medieval Diocese of Kilfenora’ ,Dissertation submitted for the degree Doctor of Philosophy in Archaeology.  University of California. 1995.  Pp. 488-490.