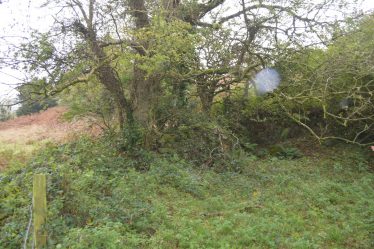 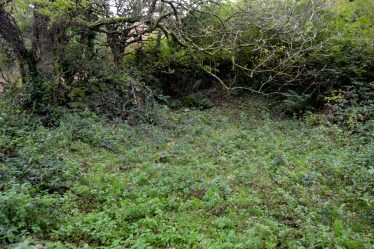 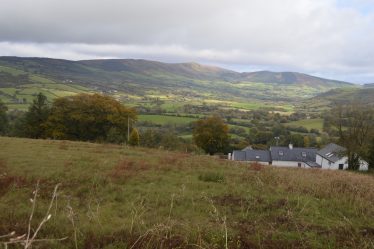 Gortacullin, Gort a’ Cuillin translates to ‘The Field of the Holly’

This well is thought to have been removed in recent times. It is likely visits to the well had ceased long before this happened. The well lay in an alcove of land towards the bottom of a grazing field. The site where the well stood is on the slopes of Gortnacullin Townland and lies one field higher than the 19th century Broadford-Limerick Road. Because of this, it would most likely have been a stopping point for travellers in the past. The are no crosses, statues, votive offerings in the area.

Like many wells found around the village of Tulla, this holy well is dedicated to Saint Mochulla. His feast-day is 12th June. Saint Mochulla was a 7th century saint and is the patron saint of Tulla Parish. He is remembered, but there is little active veneration to the saint today.

‘There is a holy well in the Townland of Gort-a-Chuillin dedicated to the same person at which Stations continue to be performed still for the cure of soreness of the eyes.’

The well lay on an elevated site which looks down the Broadford Valley and across towards Glenagalliagh Mountains. It was situated in a grove which is common for many springs across the county. There are several mature trees present at the site, including ash which, at the time of the research visit, were showing signs of die-back. There were one or two sycamores trees in the area. The ground is damp, with nettles and ferns.

Broadford Village is a 10 minute drive from the site of the holy well. The area offers beautiful mountain views, with the Sieve Barnagh Mountains and the river Shannon close by. The area is rich in Late Bronze Age archaeology.

T.J. Westropp wrote about Saint Mochulla in ‘A Folklore Survey of County Clare’:

‘St. Mochuille, Mochulleus, or Mochulla came into Clare about the same time, 620. His father was Dicuil, or Dicaldus according to the ‘Life’ of 1141, which tells how Mochulleus struck the hillside and three streams broke out and ran down to the lake (stagnum), north of Tulla. The ‘Life’ was recently found in Austria,[54] Colgan having sought for it vainly in Ireland in 1637, so the local tale is an actual tradition. The two springs forming St. Mochulla’s well are on the eastern shore of Loch Graney, and the earthworks are still traceable round the church of Tulla (Tulach nan easpuig, rendered ‘Collis Episcoporum’, in the ‘Life’). The saint is also commemorated by Temple-mochulla in south-east Clare, and by no less than fifteen holy wells near Tulla.’