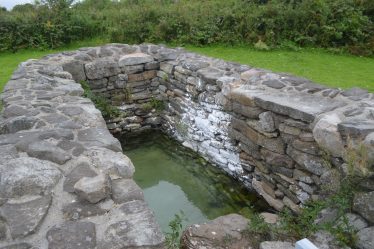 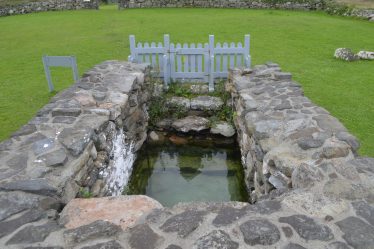 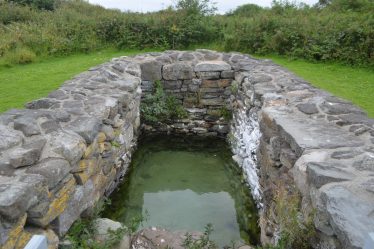 This holy well is in a field to the west of the round tower on Scattery Island. Having also served as the village well, it is extra large, measuring approximately 4 x 2 metres, with a strong concreted wall as a surround. The well is a spring which maintains a flow throughout the year.

The well is dedicated to Saint Senan, the 6th century founder of the monastic settlement on Scattery Island. The well is said to offer a cure for sore eyes. 8th March is the feast day of Saint Senan, which was observed by the island villagers in the past. Scattery Island was abandoned in 1978. Ex-islanders occasionally visit the well to pray or take a sample the well waters. Mass continues to be celebrated in Teampall na Marbh church around the 15th August.

Scattey Island was once a successful farming community. Since the island ceased to be populated in 1970s, the landscape has reverted to natural shrub, with elder being the dominant tree on the island.

Scattery Island is a tourist destination during the summer months. The island is now managed by the Office of Public Works and the National Monuments Service, who maintain the island’s archaeology and story. Tourists on the OPW guided tours during the summer months take the opportunity to connect with the well. Nearby is Kilrush Town and to the north lies Kilkee and the Cliffs of Moher.

Senan, also known and Seanán/Sionán, was the son of Corca Baiscinn nobles Ercan and Congella. There are eighteen holy wells dedicated to Saint Senan in County Clare, as well as a monastic settlement on Inis Cathaigh and the remains of several other churches in the county, as well as in Cork, Great Britain and Brittany.