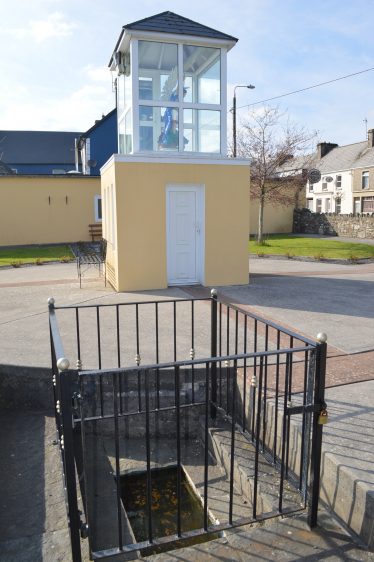 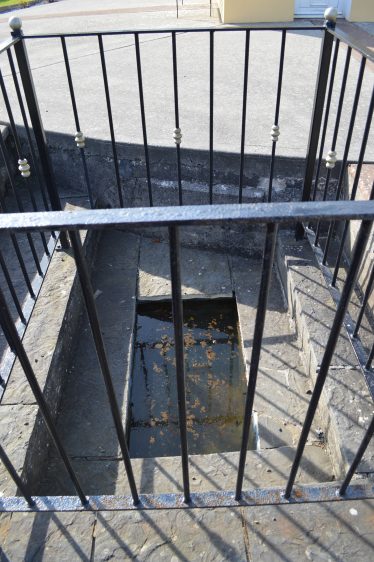 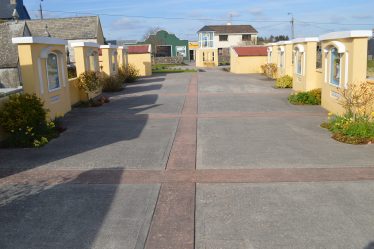 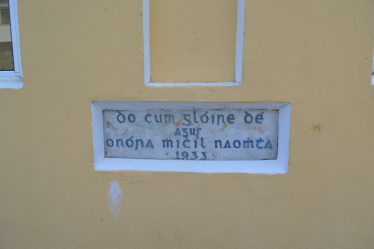 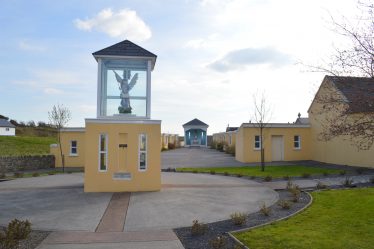 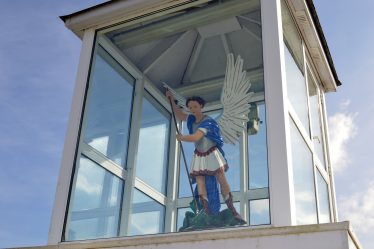 The well complex is on the south side of the main street at Kilmihil Village. While the well forms the central part of this site, other monuments have been added since the 1930s.
In 1931-32 the local curate Fr. Reilly began the task of renewing the Holy Well site. Aided by his parishioners he brought about many renovations. The Irish Folklore Collection, 1937, records some of these changes:

‘The ground was levelled, the traditional “rounds” concreted, dainty flower-beds laid out, the well completely covered by a small pump-house surmounted by a splendid statue of the Prince of Heaven. A low concrete wall bounded the shrine on the road-side while two rest houses, where patrons may remove their foot gear, a necessary part of the “round”, formed the boundary on the opposite side.’

In time an outdoor Stations of the Cross and a covered altar were added at the rear of the well. The Stations are interesting as the text beneath the individual stations is in Old Irish.

The well is dedicated to Saint Michael the Archangel. Folklore tells that the area was named for Saint Michael by Saint Senan of Scattery in the sixth century. In the folklore of Inis Cathaigh, Michael is said to have assisted Senan in ridding the island of ‘An Cathach’, the resident monster. Saint Michael’s feast day is 29th September and it is still celebrated at a number of sites across Ireland.

The tradition at the well involves the reciting of three Rosaries, as well as the Apostle’s Creed, a number of Aves, and the Stations of the Cross at the nearby church, ending with a special prayer to Saint Michael.

The well lies in an urban setting. Other than summer planting there is not too much foliage here.

About one mile south of the holy well is  Knockalough Lake which features a crannóg , a man-made island containing a small tower house. This tower house once belonged to the Mac Mahons of Clonderlaw.  The only chieftain mentioned in association with Knockalough Castle was ‘Turlough Roe, the liar and deceiver, who by one stroke killed his wife and child’.

There is much archaeology locally, including the medieval Saint Michael’s Church, the pair of Liagauns or pillar-stones in Termonroe and Cahermurphy Stone Fort.

Saint Michael’s Well is one of very few that has a commencement date:

‘The Church ruin in the cemetery was originally the medieval parish church. In 1632 Mariana MacGorman dreamed on three occasions that St. Michael the Archangel appeared to her and directed her to go to his church at Kilmihil and dig for his well at a little distance, where she should find some reeds growing. She did so with the help of her parish priest and son and discovered a spring on the spot indicated’.

‘During the penal days it was visited by people from far and near seeking cures for their various complaints. The church ruins were partially rebuilt and the site of the shrine and well were cleaned and renovated between 1934 and 1937. The cemetery contains some fine examples of the house-like tombs peculiar to the area’.