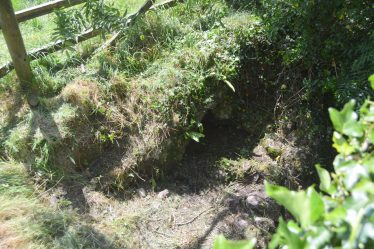 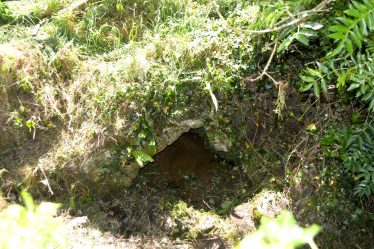 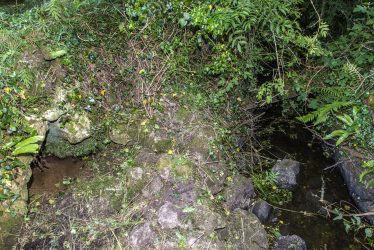 Some locals felt that this was a domestic well and other said that they understood this to be Saint Mochulla’s well. There are many instances of holy wells ‘migrating’ to a new location and perhaps this may explain the different accounts and locations of this well.

Up until 1839 patterns were held at the principal wells dedicated to Saint Mochulla on the 23rd of March and the 23rd of June. The Saint’s Feast Day was on the 11th January. There were no votive offerings at this well at the time of the research visit, nor was there any information on prayers or rituals. It is believed that there has been no pilgrimage activity at the well in the last two generations.

The holy well is on the left bank of the stream immediately below the bridge. It stands at the edge of a small grazing field beside a newly constructed house.

Tulla Village is 4 kilometres east of the well site. About 4 kilometres to the west are the caves of Kiltanon.

John O’Donovan, Ordnance Survey Letters 1839:
There is another Holy Well called Tobar-Mochuille in the Townland of Knockdromleagh, at which Stations continue still to be performed.

‘Blessed wells – fifteen in number – geographically distributed over East Clare – bear the name Tobar Mochulla. Six of these are in the parish of Tulla and occupy positions to the east, west north and south of the Hill. They are to be found at Tulla, immmediately at the base of the Saint’s rampart and in the townlands of Fortanne, Drimleague (Miltown) Cragg, Laharden, Kilgorey. His other wells are at Loughraney, Lough Brighid, Broadford, Clonsheera (near Trough) Ralahine, Rath ( Ráth) (Sixmilebridge) Kilnoe, and Cappavilla’.