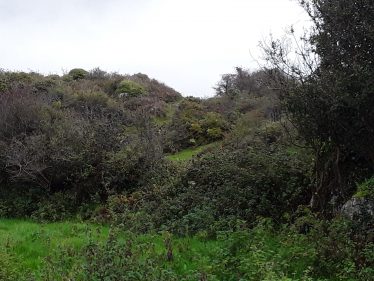 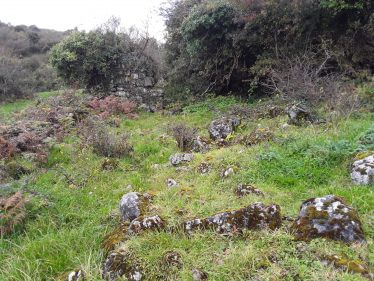 The holy well is located in the south-west of the Burren, two kilometres west of Galway Bay. The well is part of an early historic church site (see Sheehan below). Possible early historic features on the site include church ruins, well, enclosure and souterrain. There is also a children’s burial ground, or cillín, at the site.

Oughtdara from the Irish Ucht Dara meaning the ‘Hill-Breast of the Oak’, according to www.logainm.ie.
However, another possible translation is the ‘Hill-Breast of Dara’, in reference to Saint Mac Dara, to whom the ecclesiastical site in the townland may be dedicated. Averil Swinfen writes that:
‘The derivation of Oughtdara from St Mac Dara is thought to be doubtful. Nevertheless, this saint was known locally. ’

Mac Dara is a saint who had a regional reach around Galway Bay. The hermitage at Saint Macdara’s Island is located off the southern coast of Galway. The pattern day is still observed on the island each year on 16th July.

T.J. Westropp writes that this saint is also known as ‘Sionach’. This may derive from ‘síon’ or ‘storm’ and there are a number of folk tales about the saint raising gusts of wind to punish those lacking in respect for his feast day or his island. His holy well at Moyrus in Connemara is called ‘Sruthán Síothnach’, translated as ‘The Little Stream of Síothnach’.

The valley where the well is located is of minimal interest in terms of biodiversity. However, the bordering areas of limestone pavement are of international importance for geology and wild plants.

T.J Westropp, writing in the early 1900s, maintained that ‘the dedication of the well is forgotten, the name being Toberaneenagh, translated as ‘Wine Well’.

The 15th /16th century tower house, Ballinalacken Castle, linked with the O’Brien Clan, is 2 kilometres south of the holy well. The Burren Way, a long distance waymarked walking trail is 1.5 kilometres east. Lisodoonvarna is just under 6 kilometres south-east of the well site.

Robinson, T 1999, The Burren: A Two-Inch Map of the Uplands of North-West Clare, Folding Landscapes, Galway