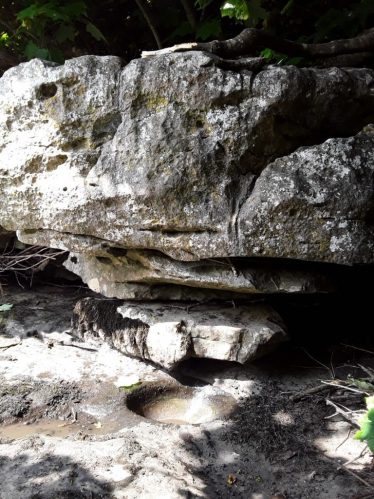 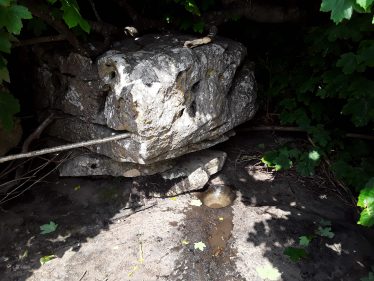 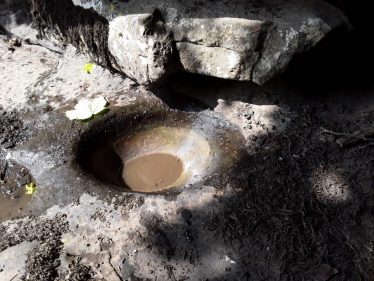 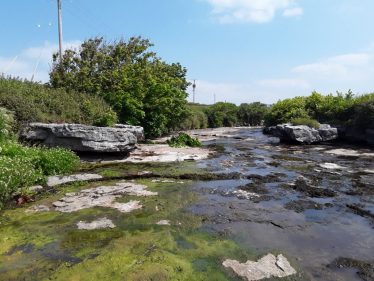 This holy well is located on the northern side of the River Aille, just a short distance west of Fisher Street Bridge. It consists of a basin stone or ‘bullaun’. Records in the National Folklore Collection state that Brendan is credited with making the basin stone with his hands. One has to enter the river in order to view or access the well as it is situated on a ledge under the river bank. It is a most unusual location for a holy well.
The River Aille rises on the slopes of Slieve Elva in the Burren. It flows through Lisdoonvarna and on to Doolin, where it reaches the sea not far from the Cliffs of Moher.
The well is in excellent condition as Martin Breen describes it as ‘almost like a natural bullaun’ in his Doolin Guide and Map.

This holy well is dedicated to Saint Brendan of Clonfert, also known as Brendan the Navigator. According to tradition, this  6th century saint  undertook a fabulous ocean voyage. Whilst this remarkable maritime pilgrimage remains historically unproven, it was the subject of one of Europe’s great medieval folk tales, Navigatio Brendani. Saint Brendan’s holy wells in Ireland extend along the west coast from Kerry in the south-west, to the island of Inishglora off the north-west coast of County Mayo. His cult even extends beyond Ireland, to maritime communities in Brittany, Wales and Scotland.

National Folklore Collection, Schools’ Collection, 1930s:
‘Brendan was on his way to Aran. He overnighted on the way at Toomullin (Doolin) with St Brecan. At a certain point, he moved on to Doolin and he lay down in Fisher Street. When he woke up,  he scooped a hole in the rock and thus the well was formed.’

One had to visit the holy well three times – on two Mondays and a Thursday or, alternatively, two Thursdays and a Monday. One had to say five Our Fathers, five Hail Marys and five Glorias. As the name suggests, this well was said to hold a cure for warts.  No offerings were present at the holy well at the time of the research visit.

The area surrounded the well is intensively-managed agricultural grasslands. The catchment of the River Aille is currently identified as an area of action in the River Basin Management Plan for Ireland 2018–2021.

Doolin Village (Fisher Street) is about 200 metres west of well. Doolin Pier with ferry services to Aran Islands is 1.5 kilometres west. The starting point of the Cliffs of Moher Walking Trail is 1 kilometres south-west.

Monument not yet recorded