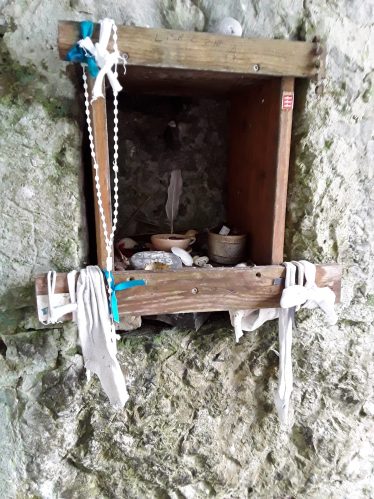 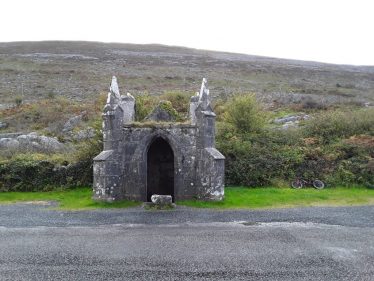 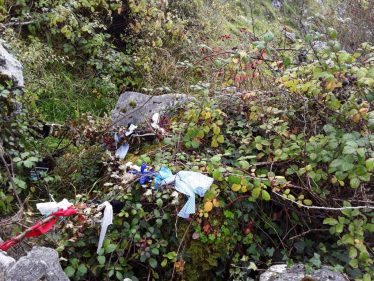 Gleninagh comes from the Irish Gleann Eidhneach, ‘The Ivied Valley’.

This holy well is located on the side of the road, about 4 kilometres west of the village of Ballyvaughan, at the northern base of Cappanwalla Mountain (312m). It is 500m from the southern shores of Galway Bay.
Tobercornan is hard to miss as a result of its ‘super-structure’, a Gothic revival well house built in the 1860s. It is an  extravagant structure with pinnacles, buttresses and an arched doorway. It was almost certainly built by the landlord as a folly – a highly ornamental structure with little practical use. There is a niche at the well in which offerings are deposited.

There are steps from the entrance down to the holy well, which takes the form of a in a hollowed-out ‘basin’ of the bedrock.  A sign inside reads ‘Clare Co Council drinking water. Please keep clean’. The source of the well water is the summit of Cappanwalla Mountain. The water emerges from the underground at Tobercornan in the form of a naturally-occurring spring.

Saint Cornan is an obscure figure. He features in T.J Westropp’s List of the Patrons and Founders of Churches and is described as ‘Cornan of Kilcornan, near Ennistymon, and Tobercornan, near Ballyvaughan’.
Saint Cornan does not appear in Pádraig Ó Riain’s ‘A Dictionary of Irish Saints’.
Another interpretation of the name is offered by Thomas Cooke writing in the 1840s:
‘This well is called Tubbercornane, probably from the Irish Tobar, a spring, and Corna, a drinking cup’.
The monument is also known as The Pinnacle Well because of the spire-like shape of its 19th century well house.

There is no record of the pattern day, customs of cure at this holy well. It seems that Tobercornan has not been regarded as a holy well for a considerable period now.  As far back as the 1830s it is described to ‘have been originally a Holy Well’. (Ordnance Survey Letters, 1839)

Nevertheless, there are still offerings to be seen in the niche in well house. Most of these may be explained by the fact that the monument is a well known tourist attraction and tour buses stop there. It is suspected that most of the offerings are of a casual nature, left by passing tourists rather than the conscious depositions of devotees.

To the south of the well are the slopes of Cappanawalla. Limestone pavement and semi-natural grasslands surround the holy well. These are species-rich habitats of international importance.
About 300 metres east of the well, a laneway leads down to An Roinn/The Rine Peninsula and Salt Marsh. It is locally known as The Rine. This salt marsh is of regional importance, and is an important habitat for birds.

An Rinn/The Rine Peninsula is across the road from the holy well. Ballyvaughan Village is 4 kilometres east of the well. The parish’s much more noted well, Tobar Na Croise Naoimhe or ‘Tobernacrohaneeve’, is 1 km north-west of Tobercornan. Tobar Na Croise Naofa is a Lughnasa site.

TJ Westropp, List of the Founders and Patrons of the Churches of County Clare