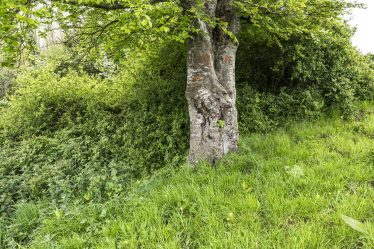 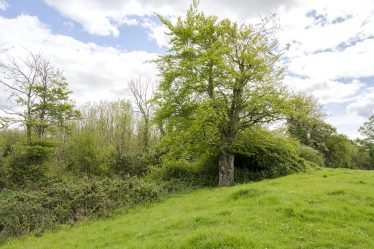 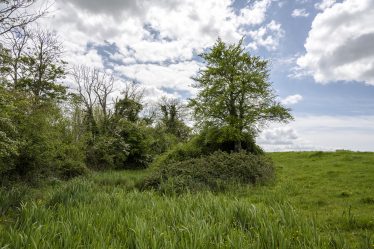 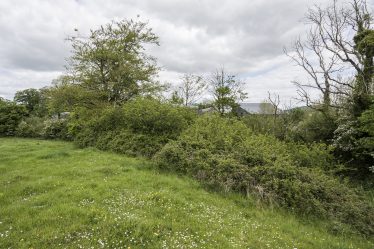 The townland name is sometimes abbreviated to ‘Cappa’ by locals. The parish name is in remembrance of Saint Finachta who is patron of the parish. The well is dedicated to Saint Michael.

This holy well is set back against the inner hedge of a large field beside the local Rossmanagher road. The area around the well is covered in significant foliage. The lower ground of the well is wet and heavy. The well itself could not be seen at the time of the research visit, but may be lost in the bushes at the site.

The well is one of several in the county dedicated to Saint Michael/Michael the Archangel. His feast day is 29th September.

The field is a rolling grass pasture free of shrubbery except at the well site. There is a very fine beech tree growing beside the well area, with many signatures cut into the bark.

The fine village of Sixmilebridge is less than a five minute drive from the holy well site. Ieverstown House is in the village, built about 1750. The O’ Garney River was once an important conduit for river traffic and gave the town its Irish name ‘Droichead Abhann Uí gCearnaigh’, referring to the bridge of the O’Garney River.

The townland, Cappaghcastle, is named after a castle that once stood in the area and has now all but disappeared. James Frost wrote in 1893:

‘Cappagh Castle was said to have been built by Convea M‘Cumara-M‘Shane-M‘Namara, and was returned in 1570 as belonging to Shane M‘Namara.

Cappagh, with four plowlands, was passed in the Earl of Thomond’s patent of 1620.

During the siege of Bunratty, Colonel M’Adam placed some musketeers there, under Sergeant Morgan, who were captured by the confederates on the 13th of May.

The foundations only of this castle now appear, the stones having been removed for building a house near it. Here was the manor mill of Bunratty, to which all the tenants on that manor of the Earl of Thomond were bound to send their corn to be ground. It was a windmill, situated on a high point of land. Some old millstones still mark the site’