The Man Servant's Grave, The Grave of the Saint's Servant, Keelhilla 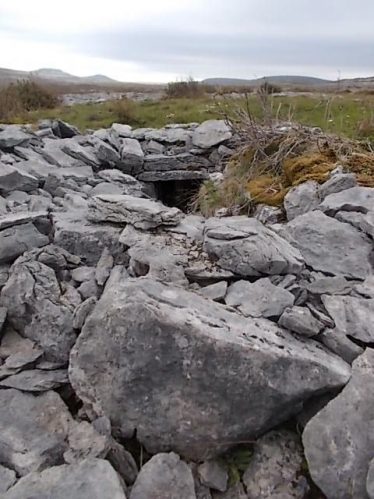 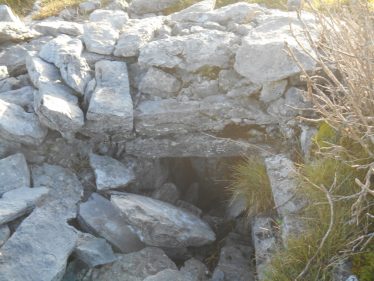 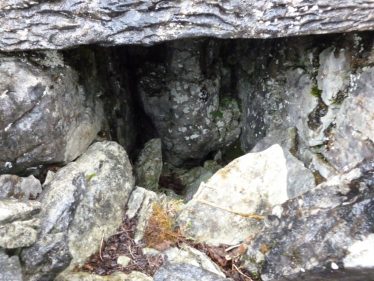 Keelhilla, from the Irish ‘Coill An Iolair’ meaning ‘The Eagle Wood’.

This well takes the form of a very low, drystone construction which is elliptical or oval in shape. Within the structure there is a crypt-like step-down feature which is capped by a lintel stone. There was no evidence of water at the site at the time of the research visit.
Sinéad Ní Gabhláin writes in 1995 that: ‘It may possibly have been a well’.

There are two ‘leacht’ or outdoor altars beside the monument. These are also drystone constructions at the site. One is big and the other smaller. Both are said to have had undecorated upright slabs up until at least 1995.
Thomas L. Cooke, ‘Autumnal Rambles about New Quay, County Clare’, 1842/43:
‘The people here relate that this was the burial place of Macduach and of his attendant. It is called Laught-divanough, probably Leacht Dithreab hach, which seems to be in Irish the Hermit’s Grave, or the pile of stones in memory of the hermit’

The pattern date at this holy well was in August and the pattern would end at Saint Colman Mac Duagh’s Hermitage. This hermitage has been identified as a Lughnasa site. The Man Servant’s Grave is a satellite monument of the pattern core. It is likely that the  well was visited most frequently around the time of the Lughnasa festival.
Another satellite site on the pattern route is ‘Bóthar Na Mias’, The Road of the Dishes, less than 1 kilometre north of The Man Servant’s Grave. According to tradition, Colmán Mac Duagh and his servant lived in the hermitage for 7 years. After lent on one occasion, they availed of a lavish supper which had ‘deserted’ the king and his subjects in the palace in Kinvara. This feast was so bountiful that the man servant died of over-consumption. The prints of the king and his attendants are said to be still visible in the stone at Bóthar na Mias. Here was also said to be the site of  the Easter miracle of Saint Colman Mac Duagh.
The Grave of the Man Servant and Bóthar na Mias were undoubtedly important ritual stops on the pattern route.

The official diocesan feast date of Saint Colmán Mac Duagh is still celebrated each year with mass at the hermitage on 29th October.

The holy well is surrounded by an extensive area of limestone pavement and thin soil in the Burren National Park. The area is very species-rich in spring and summer.

The entrance to the Burren National Park is 1 kilometre south of the holy well. The National Parks and Wildlife Service maintain the park. Saint Colman’s Hermitage which features an ancient oratory, saint’s bed, outdoor altars, bullaun stone and holy well is 1 kilometre west of the holy well. The village of Carran with the Burren Perfumery and Cassidy’s pub is 9 kilometres south-west and Kinvara is 9 kilometres north.

Ní Gabhláin, S 1995, Church, Parish and Polity: The Medieval Diocese of Kilfenora, Dissertation in partial satisfaction for the degree Doctor of Philosophy in Archaeology.  University of California, pp. 488-490.