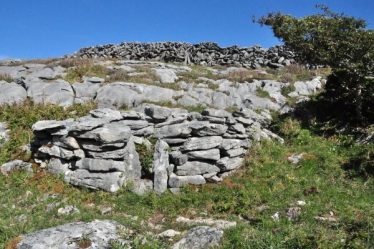 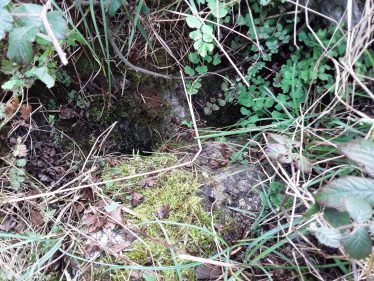 This holy well is positioned in the floor of a major trench which is oriented north-south. The well is cut into the flank of the hill and consists of two hollows in the ground – one of which is filled with water. The hollows are housed in a circular-shaped drystone well house. There is vegetation partially obscuring the well.

Four features of the early monastic site of Saint Colmcille can be identified at separate locations in Crumlin, County Clare.

Saint Colmcille is one of Ireland’s three patron saints, the other two being Saint Patrick and Saint Bridget. All three saints are said to be buried in Downpatrick, County Down. Saint Colmcille is credited with founding a monastic site at Iona in Scotland in the 6th century. Iona was subsequently considered to be one of the three most significant ecclesiastical sites in Ireland and Scotland, along with Kildare and Armagh.
Saint Colmcille’s cult is spread across Ireland and Scotland. There are two sites associated with this saint in the Burren: Glencolmcille at Carran and Crumlin at Fanore.

Holy wells known to cure eye ailments may on occasion resemble an eye. There are a number of holy wells in County Clare which are eye-shaped, including Saint Fachtna’s in Fahee South, Carran and Tobar Iníon Baoith in Killinaboy). The shape of the wells helps to endorse these places as cures for eye ailments. Saint Colmcille’s Holy Well in Crumlin goes one step further, as the well is made of two separate, vertical cylindrical tubes, resembling a pair of eyes.
It is worth noting that one of the tubes has no standing water.

More than twenty offerings lie on the wall of the well house. One offering is a rusted piece of metal. The remaining objects are low-denomination coins. Two currencies feature – the now obsolete punt (pre 2002) and the current euro. Most of the coins are of pre-2002 denomination. Rusted coins deposited in a hollowed piece of limestone suggest that the practice at the holy well discontinued at least a couple of decades ago.

The well is located in the Aillwee Member of the Burren Formation, probably just above one of the major shale layers that form the terraces in these limestones. The well comprises of two separate, vertical cylindrical tubes, about 150 mm in diameter, 350 mm deep and 100 mm apart. It would seem that these tubes developed on a north-south joint. A trickle of water was flowing south-north across the base of the more northerly tube at the time of the research visit. However, there was no flow or standing water apparent in the other tube, despite recent rainfall.

Fanore Village is about five kilometres north-east of the monument.