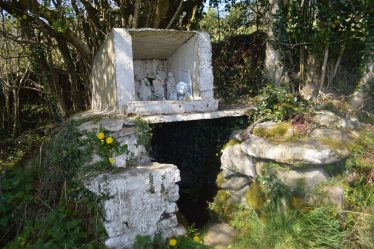 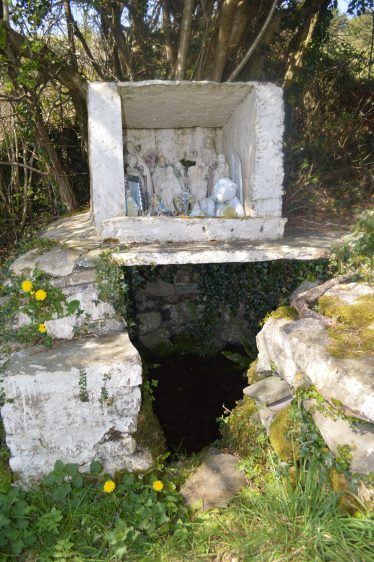 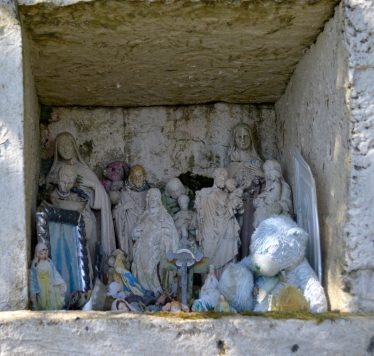 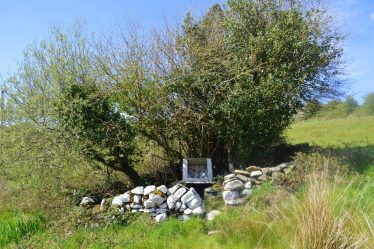 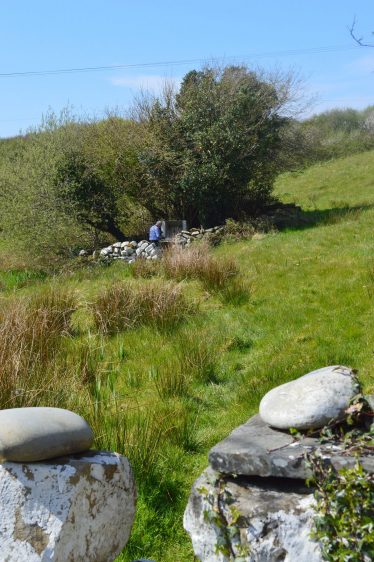 This well lies to the north-east of Ennistymon, off the N67 and on the Kilfenora road. It is in the townland of Ballymacravan, on the west side of the R481. A stile in the wall indicates the entrance. The well stands in a cluster of white thorns with a fine holly tree. It is more or less at the center of a rushy field and surrounded by a low stone wall. A shelf above the spring has a little grotto with numerous statues and offerings, some of which have become bleached by the weather. The well contains fresh water.

The well is dedicated to Saint Cravan, also referred to as Crabhan or Mac Cravan.
Writing in 1893, James Frost describes it as being ‘Mac Ravan’.
Saint Cravan, who lived at the same time as Saint Caimín of Ballykillvarga, was said to have the gift of curing eye ailments.

An entry in the North Munster Antiquarian Journal reads:

‘The required prayers at the well are five Paters, Aves and Glorias while kneeling before the well. This is followed by offering five decades of the Rosary while moving slowly around the well five times in a clockwise direction. One then blesses the eyes at the well and taking a sip of the water concludes the visit’.

The area where the well is located is damp and slopes a little from west to east. It is heavy underfoot and a little rushy. The soil might have a peat layer. Apart from the whitethorns around the well, there is no significant tree cover.

The town of Ennistymon, with a selection of shops and restaurants, is less than 10 minutes by car. It is home to ‘The Falls’, a spectacular cataract on the river Inagh as it flows through the town. It is best viewed from the Falls Hotel, whose location takes full advantage of the view of the rapids.

‘There is another holy well in the Townland of Ballymacravan called Tobar-na-Crabháin or Mac Cravan’s Well at which Stations are still continued to be performed and cures expected’.