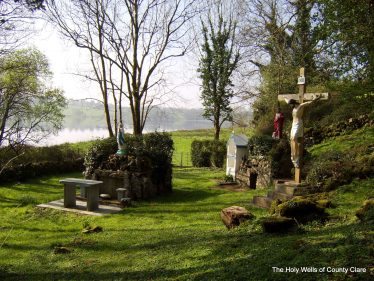 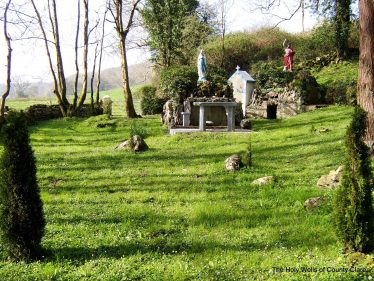 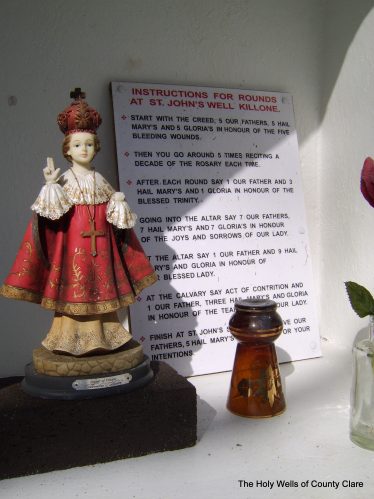 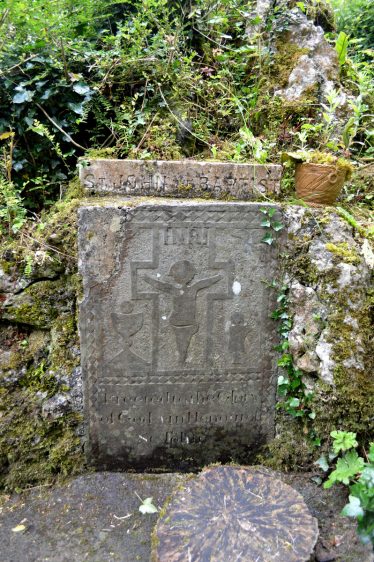 This holy well is located on the west bank of the narrow strip of water that connects Ballybeg Lake with Killone Lake. The well lies about 100 metres north east of the Augustinian convent.

At the well site there is a small grotto enclosure with some statuettes, behind which is the well house with water present. Just behind the holy well is a statue of Saint John, which was damaged in the past by a falling tree. On the same side is a near full-size representation of the crucifixion.

Close by the well is an old stone, carved in the 18th or 19th century with a figure of Christ and the words ‘For the Glory of God and in honour of Saint John’.

At the centre of the site is an altar, erected in 1731. In front of the altar are some modern stone benches. Behind the altar is another well, with a tree to the side. It is from this well that pilgrims collect water to take home.

The entire well area is excellently maintained by the local community.

The well is dedicated to St. John the Baptist whose feast day is 23rd June. This is also Midsummer’s Eve. The bonfires that still occasionally burn on this night may be an combination of two traditions.

There are also records in the collection of the traditional worship at the well:

‘When the people come to the well, they drink a glass of holy water, after doing the round. This round is completed by saying the Rosary while doing the five rounds. If a person does not go barefoot they must make an extra round. When the five rounds are finished they must go on their knees to the altar, and kiss the Crucifix. Most people bring a bottle of holy water home from the wells. People go there from June the 24th to the 29th. It is supposed that St John lived here long ago. He foretold that no damage would ever be caused by lightning to the people of Ballyea.’

The midsummer visits continue with Mass at the well on 23rd June.

The well lies close to the lake, and irises and other wetland plants grow at the site when in season. A canopy of trees, mostly ash, offers shelter on a warm summer’s evening. They also attract birds so that the area enjoys birdsong.

The well site is ten minutes from the R473 road, where the visitor can travel west to Kiladysert and Kilrush or east to Ennis.

St John’s Holy Well is said to have been the background for the renowned painting of ‘The Blind Girl at the Well” by Frederick William Burton, R.H.A.

In ‘County Clare: A History and Topography’, 1837, Samuel Lewis writes:

‘About the year 1190, Donald O’Brien, King of Limerick, founded an abbey here for nuns of the order of St. Augustine, and dedicated it to St. John the Baptist. Slaney, the pious daughter of Donogh Carbreach, King of Thomond, was abbess of this nunnery. The ruins are beautifully situated near the north-eastern extremity of the Lake of Killone, and form a very picturesque feature in the scenery. At a short distance from the abbey is a celebrated holy well, dedicated to St. John, on the eve of whose anniversary it is resorted to by the peasantry from various parts of the county’.

‘In Newhall Churchyard there is a flat stone outside the ruins, and every coffin must be laid down on this stone before being brought to its grave’.

Power, J 2004,  A History of Clare Castle and its Environs,  Joseph Power, Clarecastle