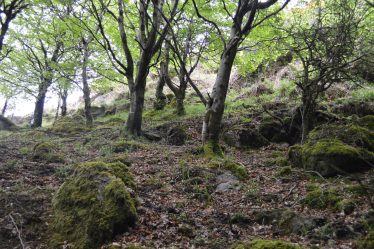 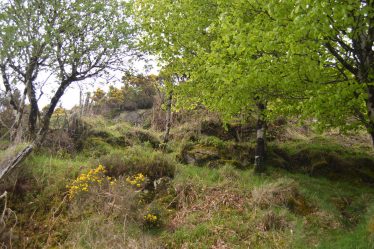 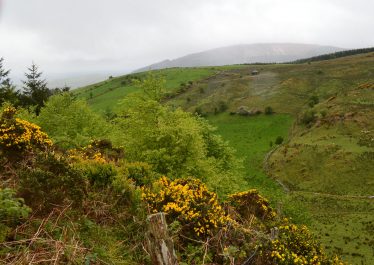 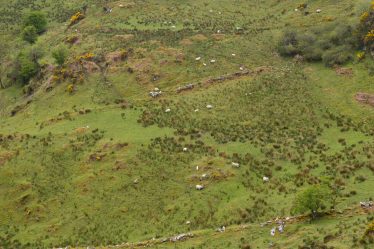 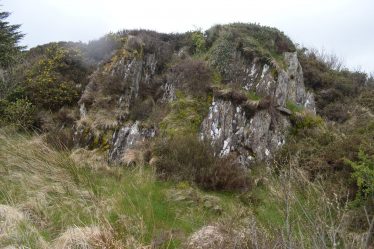 This is not what one would consider a ‘regular’ holy well, but is still a site of great cultural and mythic interest. The well is part of a disjointed collection of monuments in Craglea Townland, east of the R463 road. It is on the lower slopes of Craglea Hill overlooking Lough Derg and Béal Ború, the large ringfort associated with the Dalcassian O’Briens. The well is sacred but possibly not holy in the conventional sense, as it is in the territory of the banshee Aoibheall, patroness and protector of the O’Brien Clan. The well and rock are difficult to find.

Reference is made to this well in the Ordnance Survey records for Killaloe, 1839:
‘In this Parish, about a mile northwards of Killaloe and rising over the road as you go to Tomgraney, is the far-famed rocky mountain of Craig Liath, which is well known by name in every part of Ireland as the habitation of the great spirit Eeval, the familiar sprite or Banshee of Munster in general and of the Dalcassians in particular. Her palace is shewn in a wild glen in the mountain. It is a rock about forty feet in height and most romantic in appearance. A well called Tobar Aoibheal after the same fairy queen springs from the side of the same mountain.
The Banshee is celebrated by the poets of the last century, many of whom, however, did not know her locality. I am not aware either that any of our ancient or modern topographical writers have pointed out her locality’.

Natural Heritage around the Well

The plateau where the well is located is above a wood with little undergrowth. Above the well site, the ground opens up to show rocks, heather and tall grasses in peat soil. Mature trees are found at intervals where old hedges once grew.

There is a fine view of Lough Derg and the lower Shannon River from the site. Below, close to the shore, is Béal Boru, a large earthen ringfort associated with the O’Brien dynasty. Killaloe Town a few minutes from the well site, contains Saint Molua’s Church.

T.J. Westropp, A Folklore Survey of County Clare, 1912:
‘The Banshee is celebrated by the poets of the last century, many of whom, however, did not know her locality. I am not aware either that any of our ancient or modern topographical writers have pointed out her locality’.

T.J. Westropp, A Folklore Survey of County Clare, 1912: ‘Banshees’
‘Above the Shannon gorge, overlooking a beautiful mass of mountains, the southern arm of Lough Derg, and the river and Killaloe with its weirs, rises the great brown and purple bluff of Craglea. Above the low earthworks and mound of stones that mark the ninth-century fort of Prince Lachtna ascends a rough lane. Further up on the east flank a little well, Tobereevul, gushes out from under a low rock amid the ferns,and on the west side,—up a lonely valley, a long-forgotten battlefield, ‘Crag Liath where shields were cleft,’ in one of Brian Boru’s earlier combats with the Norsemen,—rises a high crag called Craganeevul. The names of both well and crag commemorate the tutelary spirit of the House of Cass, Aibhill or, more correctly, Aibhinn, ‘the lovely one,’ once, it may be, the goddess of the House’.

James Frost, The History and Topography of the County of Clare, 1893:
‘About a mile northwards from Killaloe, and rising over the road as you go towards Tomgraney is the rocky mountain of Cragliath, far famed, in Irish story, and well known as the habitation of Aoibheal, the banshee of Munster and of the Dalcassians. A well, called after the fairy, springs from the side of the hill. She has been celebrated in verse by several Irish poets’.