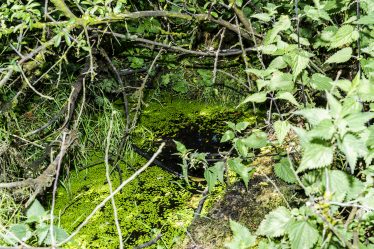 zoom
Tobernanaingeal, The Well of the Angels, Kilcorney
Tony Kirby 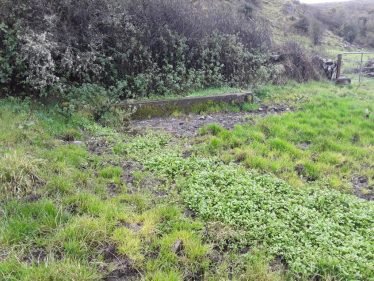 zoom
Tobernanaingeal, The Well of the Angels, Kilcorney
Tony Kirby

This holy well is located in one of the biggest closed depressions in the Burren, the Kilcorney Depression. The depression consists of a narrow valley with no surface outlets. The well is about 20 metres from the road which is the only route through the valley. There is an ancient church and burial ground 150 metres west of the well, along this road. The church dates to roughly the 10th century. Hugh Carthy notes that the site of another ancient church can be found at Kilcolmanbar, a further 300 metres west.

This is one of three holy wells situated very close to one another. The other two wells are Tobar Cholmáin Báire and Tobar Inion Baoith, in the bordering townland of Glensleade. The placement of these three wells is very interesting. They run almost in a line from north to south over a distance of 1.5 kilometres. Perhaps this alignment uses features of the landscape to enable easy access for pilgrims to the churches from a northerly direction.

Tobernanaingeal, comes from the from the Irish ‘Tobar na nAingil’ meaning ‘The Angel Well’ or ‘The Well of the Angels’. Nothing is known of the practice or feast day at this holy well. Lelia Doolan writes that the well was said to hold a cure for eye ailments.

The cult of St Colmán Báire is very strong in the locality. There is fort nearby known as Lios Cholmáin Báire, where Saint Colmán is reputed to have lived. In addition, the ancient church of Kilcolmanbara, mentioned above, is also dedicated to Colmán. Robert Frost, writing in 1893, describes Colmán as the patron saint of the parish of Kilcorney.

The name of the townland where the well is located, Kilcorney, comes from the Irish ‘Cill Choirne’ meaning ‘The Church/Ecclesiastical Foundation of a Saint Coirne’.
Saint Coirne is an obscure figure and not much is known about this Saint. Records in the Ordnance Survey Letters, 1839 note:
‘I cannot find a Saint of that name, and St. Colman Bairé (sic) seems to be the Patron of the Parish” “…..the Parish of Kilcorney called Kilcolman-Báire…’

Robert Frost, writing in 1893, recorded that Saint Colman Bairé is ‘supposed to be the same as St. Colman Mac Duach’