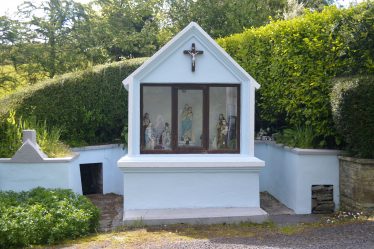 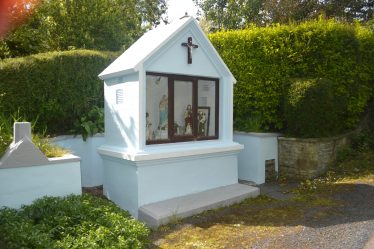 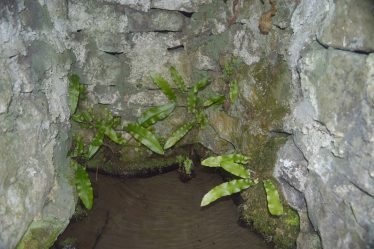 This well is on the eastern side of the Gortmore Road, in a constructed lay-by. It is to the right of a display case in a recess in the wall. The well has a water flow. The display case contains a number of domestic sized statues of popular saints and has a glass front protects the contents. The structure is painted yearly and excellently maintained.

Like many other wells in County Clare, this holy well is dedicated to Iníon Baoith, the daughter of the chieftain of the Cineál Baoith clan. This clan was concentrated in the Killinaboy and Kilnamona areas of Clare. The feast day for Iníon Baoith is generally agreed to be 29th December.

T.J. Westropp wrote about Iníon Baoith in the early 1900s:

‘Perhaps (Inneen) was daughter of Mobaoi, of Cluan Fhionnabhair (Clooney of Kilfenora), December 14; [32] his mother was of Loop Head. A certain “Columb inghen Buiti,” March 23rd, is named. [33] Ethne and Sodelb, daughters of Baoith, founded Donabate Church, in county Dublin. ‘

The well appears to be visited sporadically and may have extra visitors on 29th December.

The area where the well is located is an extension to the garden of the nearby house and contains mostly cultivated plants. Within the well space is a shallow pool of fresh clear water, with some hart’s tongue ferns growing along the side.

Ennis Town is 10 minutes from the holy well site. The well is in the parish of Kilnamona which has a number of other wells and medieval churches worth exploring.

‘Inghean Bhaoith is best known as the ancient patron saint of the parish of Killinaboy (Ceall Inghine Baoith) and devotion to her is evident in the many wells named after her in this area and where her cult was widespread. There are at least seventeen holy wells dedicated to Inghean Bhaoith located mainly in the central parts of Clare, including two in the parish of Doora/Barefield, at Dulick and Doora. Despite the widespread devotion to this saint she remains an obscure figure and even the etymological derivation of the name Inghean Bhaoith is far from certain.  The name is usually translated as “Daughter of Baoith”. It may also have been a word referring to her vocation as groups of holy women or nuns were designated “Ingena” and figured prominently in the early centuries of the church in Ireland’.