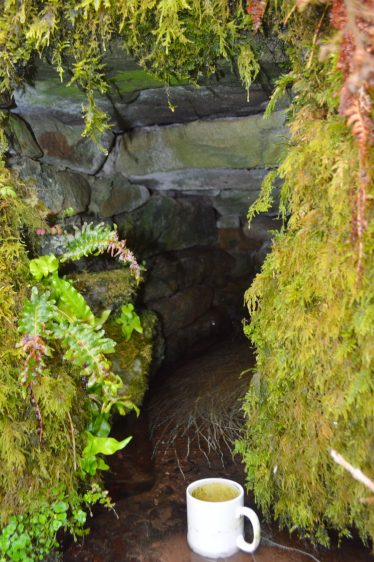 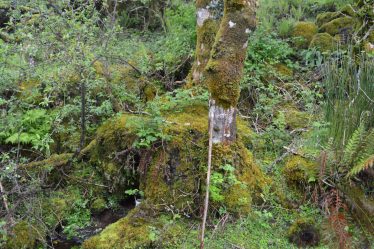 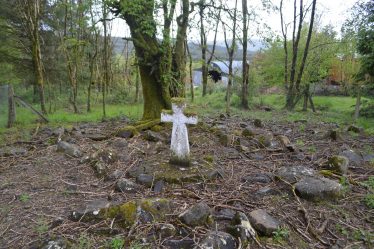 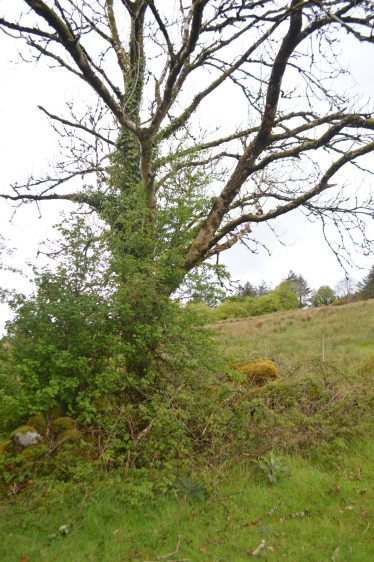 The well is part of a stream flowing from the north side of a sloping field beneath a large ash tree. A small well house has been created by placing a flagstone on some rocks over the well for protection.
Ordnance Survey Letters, 1839:
‘The Holy Well of St. Cronan, the Patron of Tuaim Greine, is situated in the centre of the Townland of Currakyle’.

The well is dedicated to Saint Cronan, whose feast day is 28th April, though this day is no longer celebrated locally. Saint Mochonna is also mentioned in association with the well but not as a patron. Historical records note that the well was used for ‘bodily disease, both external and internal’ It is also believed to be effective in treating cough, after a period of fasting. The presence of a mug suggests visitors at one time. The well, being tucked in to a tight hollow space, does not lend itself to ’rounding’.

James Frost, writing in ‘The History and Topography of the County of Clare’, 1893, remarked:
‘It is certain that Cronán of Roscrea had been on the west side of the Shannon, and had formed some religious establishments there before he settled at Roscrea. Inchicronain, and Tempul Chronain in Carron parish, are probably of his foundation. His memory is venerated on the 28th of April’.

Accounts in the National Folklore Collection record:
‘Offerings made on the completion of the Customory ritual included pieces of cloth , coins ,buttons etc. Sometimes the offerings were placed in a hole in the trunk of the ash tree and at other times tied or pinned to its branches.’

Mochonna is also mentioned in association with the well but not as a patron.

The well is against the hedge on the west side of the field in a slight hollow.  There are some moss covered stones remaining which might have formed some kind of structure, perhaps seating, in the past. There was an abundance of bluebells in the area as well as some domesticated plants at the time of the research visit. There was a large crop of watercress, a plant which is renowned for its health properties, in the stream exiting the well.

Feakle Village is a short car journey from the holy well site. The village is famous for its August traditional music sessions. It is also home to the folk figures Biddy Early, Bean Feasa or wise woman, and Johnny Patterson, 19th century entertainer and composer.

There are the remains of a cillín 300 metres west of the well, close to the Corrakyle road. The cillín is on private ground beside a local house and is being excellently maintained. A small cross under a tall ash tree stands at the centre of the cillín, with flat recumbent stones lying about.

Cillín: a burial ground on unconsecrated earth where unbaptised infants were sometimes buried.