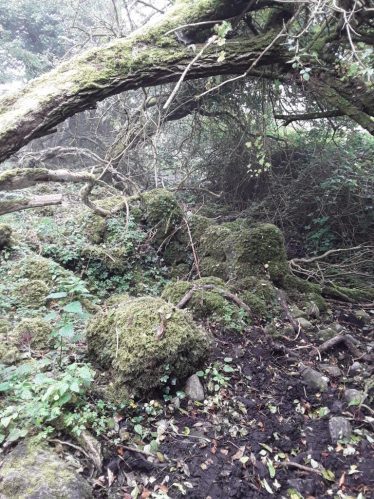 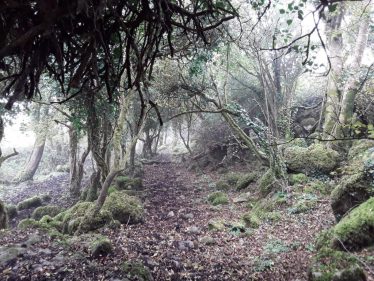 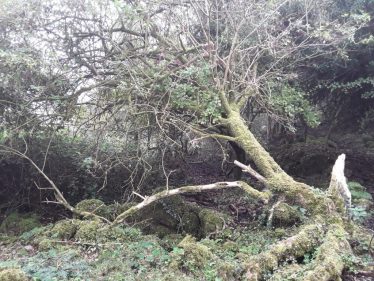 This holy well is essentially a pool of water in a drystone well house at the end of a short path. The path emerges on to a minor road which joins with main road R476. Tobar Voydan is the nearest holy well to the monastic site of Iníon Baoith, just a kilometre away. The well is visibile from the monastery, and vice versa.

Saint Voydan was quite an obscure local saint. His monastic site, Kilvoydan, was just outside Corofin to the south-east of the holy well site, on the northern shore of Lake Tedaun. The base and head of an old cross survive at Kilvoydan. The socket of the cross was venerated as a holy well and a cure for warts. See Tober Voydan, Kilvoydan.
Whilst no record of the pattern at Tobar Voydan survives, a pattern and stations used to take place on the 29th December at the nearby Tobar Inion Baoith.
Reference to the cure associated with the holy well is made in the Ordnance Survey Letters, 1839:
‘The well was renowned for cures for sore eyes and delicate children’.

National Folklore Collection, Schools’ Collection, 1930s:
‘There is a blessed well in the “riasc” near the townland of Coad, called “Tobar Bhaighdeáin. It is said that a large tree grew over it, and was cut down by a farmer who lived near by to roof a cow house. Some time after the roof was destroyed by lightning and the cattle in it were killed.’

This is one of many such stories recounted by elders and recorded by schoolchildren for the National Folklore Collection Schools’ Collection in the late 1930s. These stories serve the purpose of morality tales, discouraging people from desecrating the holy well water and sacred tree, also known as the rag tree.

Local informant Johnny Quinn, since sadly deceased, remembered:
‘When I was 7 years of age – the army was transferring on foot from summer camp back to base in Ennis or Limerick. They arrived in Killinaboy along road in lines of three. They had musical accompaniment. They stopped at Tobar Voydan for water and for food break. Much banter with locals who had assembled to see the strange sight. A vivid memory. Johnny also remembers watercress at well.’
-Narrated by Johnny Quinn to Tony Kirby. It is significant that the only recollection of the well was the use of its water for ‘secular’ rather than religious purposes.

Tobar Voydan is  on the southern edge of a local wetland area called ‘The Riasc’ from the Irish ‘An Riasc’, meaning marsh. The marsh is characterised by wetland vegetation. It is a wildly fluctuating environment. In periods of no or low rainfall, a stream runs through the Riasc. The area can also flood with heavy rain. All the waters seem to drain in a southerly direction into the nearby river Fergus at the other side of the R476. There are a couple of mushroom stones in The Riasc which are important in terms of natural history.

The holy well is less than 1 kilometre south-east of St Iníon Baoith’s monastic site – an ancient church with double-armed cross and a Sheela-na-Gig. The remains of a round tower, now in ruins, can also be found at this site. Corofin Village is 4 kilometres south-east of the well.