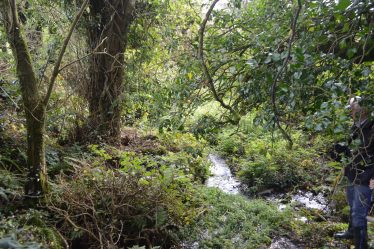 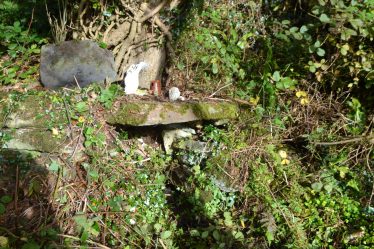 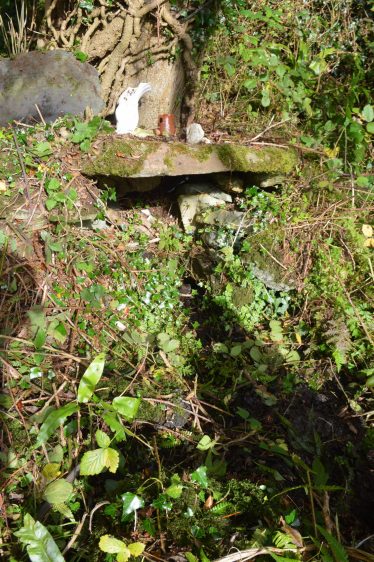 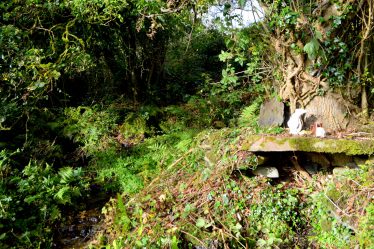 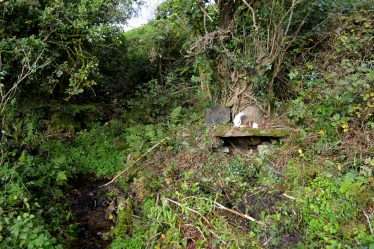 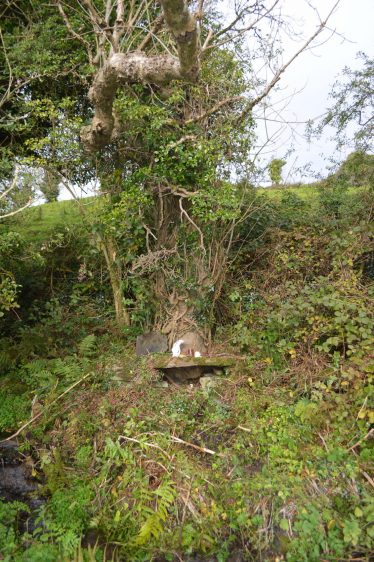 This well lies at the base of a tall ash tree on the edge of a stream dividing two grazing fields. It is a few hundred metres from the old Kilokennedy graveyard. A small stone shelf acts as a lintel from which the well emerges beneath. On it are crockery pieces, which are likely to be past offerings.

There is much history in the area. The site of the old Killokennedy Church is two fields to the northwest. The church no longer stands, but John O’ Donovan wrote about it in 1839 as part of his work with the Ordnance Survey:

‘There can be little doubt that this Church had been called Kilcronan or Templecronan before it received its present name from the Chieftain of Glenomra’. (It is) so called from the family of O’Kennedy who were the ancient chiefs of the beautiful valley district of Glenomrae, with which this Parish is exactly coextensive.

An inscribed stone from 1733 which was said to be at the well site could not be found at the time of the research visit. It may be lost in the undergrowth. A second basin said to be in the well was also absent.

The well is dedicated to Saint Cronan/Cronán, who most likely was Cronán of Tuamgraney. St. Cronan’s feast day is 28th April. In the past, rounds were made in honour of the saint and to seek a cure for certain ailments, including problems with the eyes and skin rashes.

‘Three visits were paid and three rounds were performed at each visit. Three Our Fathers and three Hail Marys in honour of Our Lord and St. Cronan were said at each round. At the end of each round one further Hail Mary in honour of St Cronan was said.’

Offerings of pictures, medals, cups and glasses were placed beside it and pieces of cloth were hung on the overhanging ash tree’

There are a number of tall ash trees sheltering the stream and well. Local folklore suggests that the tall ash tree behind the well may have been planted in the 18th century.

Kilokennedy lies in the rolling countryside of East Clare with beautiful hill scenery on all sides. It is a short distance from Lough Derg and the River Shannon.