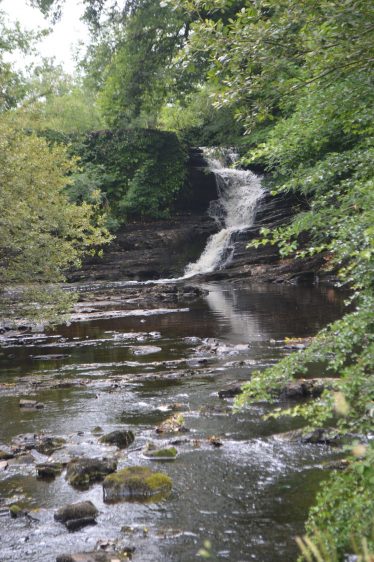 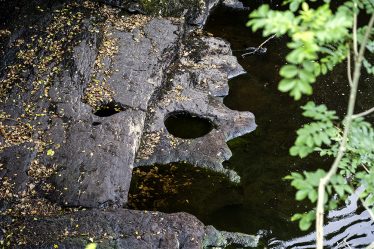 The well is made up of a series of rock pools at the base of a 20 foot waterfall in the River Abhann Sliabh, north-west of Kilfiddane Church and Graveyard.

10th September is the traditional feast day associated with Saint Screabhán. John O’Donovan and Eugene O’Curry, writing as part of their work with the Ordnance Survey in 1839, mention that the well is known ‘for the cure of sore eyes and protection against the fairies’.

O’Donovan also writes that an ash tree was growing over Sgreabhán’s bed and that on the opposite side of Abhann Sliabh there were three small wells in the rock called ‘Tobar Sgreavain’.

Some fine ash trees are present at the location. There are numerous trees on both banks of the river.

T.J. Westropp writes that the names Screabhán and Nidduan, the two saints who argued over territorial rights (see Saint Niddaun’s Well, Clondegad), may be a memory from pre-Christian times. This is further hinted at in the Ordnance Survey records when Screabhan’s Well is said to protect against the ‘sídhe’ or fairy mischief.