The Churches of Holy Island

that seems a jewel fair on Lough Derg cast!

The sight of thee a true dalcassian fills

With fondest love for Eire’s faithful past.-

To tell what once thou wert, before the dane

Where Caimin spent his life in prayer and fast.”

What you read above is an extract of a poem by Seaghan O’Deagha, published in ‘Irish Monthly’, January 1922.1

The poem tells a tale of an ancient monastic settlement, situated in Lough Derg, which was one of twelve ‘Notable Shrines’ of Ireland to which Pope Paul V attached a Plenary Indulgence after the battle of Kinsale in 1601. This Island’s name is Inis Cealtra (Church Island when translated from Irish) or Holy Island as it is known locally.

Formerly belonging to the Cenél Donnghaile in the territory of the Ó Grádaigh, St. Colum of Terryglass founded a monastery on Holy Island around 520 AD. The island became one of the most popular pilgrimage sites in Ireland for over 1,000 years. It was attacked at least twice by Vikings, once in 836 and again in 922, until by the 17th century the island was abandoned and the monuments would fall into ruins. Many legends and lore going back to the 10th century are related to this island. From stories of 15,000 Pilgrims who would walk barefoot, elaborate rounds among its monuments, to a story of a beautiful witch who liked to distract the stonemason, just to name two.

Nowadays the island is uninhabited and reachable only by boat. However, due to the large number of surviving monuments, it is widely regarded as one of the most important historical and ecclesiastical sites in Ireland.

Recently purchased from land owner James O’Brien 2  it is aimed to turn Holy Island into a major tourist attraction. The planned interpretative centre will include a 3D scale model of the monastic site, a 10-minute audio/visual story, as well as records and images of the archaeological excavations which took place between 1970 – 1980.3

The links to Ireland’s former High King Brian Ború and its secluded position has helped it to survive in an excellent state of preservation. It has been placed on the Government’s World Heritage list.

There are many attractions including the ruins of six churches, an oratory, a round tower (24 meters in height), a holy well known as the Lady’s Well, a ring fort from the Iron Age, five bullaun stones from pagan times, many beautiful 8th century grave markers and slabs, remains of high crosses, cillín (children’s graveyard), a bargaining stone, a kissing stone, a low curved earthwork between St. Caimin’s Church and St. Michael’s church known as ‘The Pilgrim’s Path’ as well as multiple graveyards.

For the following I focused on the remains of the six churches. 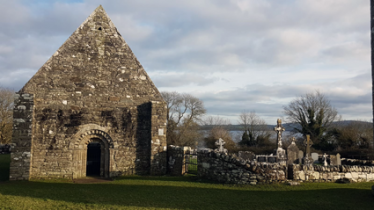 It is believed that St. Caimin’s Church may well have been built by Brian Ború. It measures 9.22 meters by 6.19 meters internally and the earliest parts date back to the 10th century. Today it is the only roofed building on the island as the nave (west end) was re-roofed by the Board of Works during the late 1990s.

In the 12th century a Romanesque doorway arch was inserted in its western wall, replacing its original trabeate entrance and a chancel (St. Colum’s church) was later added to its east.4 When, in 1879, the doorway had fallen, it was reconstructed as a three order doorway. The present doorway of four orders was inserted during excavations between 1970 and 1980, to resemble the original Romanesque doorway. 5 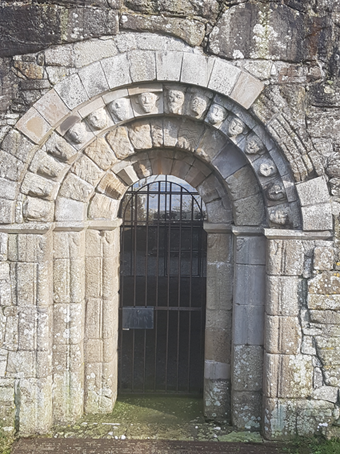 The inner order of this doorway is decorated with chevrons, the second has an elaborate pattern of zig-zags, the third has sculptured human heads in relief and the outer order has simple incised lines. 6

Stored within the church are crosses, monuments, gravestones and a sundial. One of the grave slabs bears the arms of the O’Grady’s clan and their motto ‘Vulneratus non Victus’ (‘wounded but not defeated’).  It also records that James Grady carried out restoration works on the churches of the island in 1703.7

The only window in the west wall is triangular and formed of three stones. There are two windows in the south wall. One has a semi-circular head and is ornamented with an architrave; the other has a horizontal stone at its head and the sides are inclined. 8

Some beautifully carved stones, identified as 8th century grave markers,  are set in concrete in the walls for their protection.11 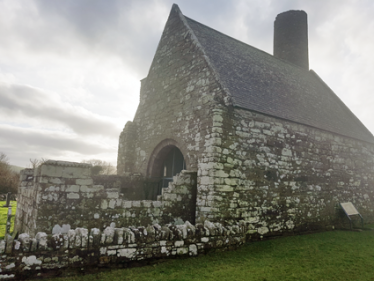 The chancel of St. Caimin’s which was added in the 12th century, is referred to as St. Colum’s church. It was possibly erected over the site of St. Colum’s cell. It was built to coincide with the changes that were taking place in the Irish church at the time.

Neatly built from well squared stones, it is not bonded to the nave of the church, but is connected to it by a chancel arch.  The arch has three orders of wedge-shaped stone facing the nave and two orders on the eastern side. Ornament is confined to the piers, which are rounded into semi-columns and adorned with capitals. 9 The side walls of the chancel are totally different to the rest as they are of Ashlar Masonry. 10

At a length of 5.9 meters and at a width of 3.6 meters, a short distance southwest from St. Caimin’s and north of St. Mary’s Church, is St. Brigid’s Church, also known as the ‘Baptism Church’.  It was built in the 12th century and has probably received its name from a saint known as St. Coelan (c. 690 – 750) who was credited with writing about the life of St. Bridgid of Kildare. 12

This little Romanesque church has had a very turbulent existence and has undergone a lot of alterations and restorations in its time. During the last century it was even called a piggery, a shameful name for this holy place. 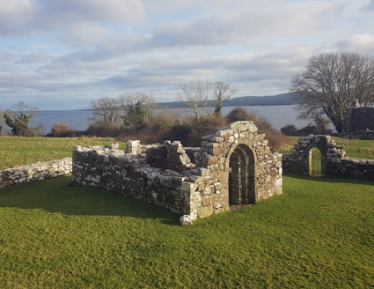 Originally surrounded on three sides by an earthen bank, the ruins are now enclosed by a stone wall with an arched gateway decorated with a pattern of parallel grooves. The west doorway, decorated in Romanesque style, collapsed in the 19th century and was rebuilt in 1890. The southern part of the church was built in the 13th century as part of an enclosing wall of the nearby St. Mary’s Church. 13

The Romanesque west doorway is in three orders, each beautifully decorated with different motifs. The inner order is covered with zigzags and encloses a row of lozenges on the soffit or underside. Some of these lozenges have rosettes. The middle order is decorated with chevrons or inverted Vs in series. The outer order is plain but is bounded by a hood moulding, which has short rolls at irregular intervals. Some of the hood moulding can be seen at the top of the gable where it has been placed for preservation. 14

Between 1970 and 1972, when St. Brigid’s church and part of the surrounding area were excavated, it became obvious that the interior of the church was used for burial as at least twenty bodies were deposited there. 15 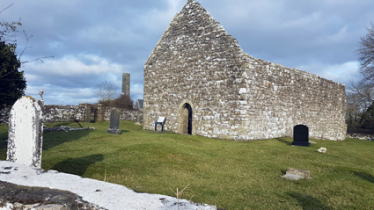 Built in the early 13th century, St. Mary’s church is the largest and most recent of all of churches on Holy Island. It was believed to have been very important during the many pilgrimages to the island.

According to G. Madden, it was ‘the parish church which replaced the monastic churches and was used up to the time of the reformation in the 16th century’. 16

Standing at a measurement of 16.6 by 6.8 meters, widening slightly at its east end, it is the only building on the island with a pointed or gothic doorway, an architectural characteristic of the 13th or 14th century. At one point two other doorways also existed, one to the north, another to the south of the church. Both were most likely built in the 1600s and are now blocked up. 17 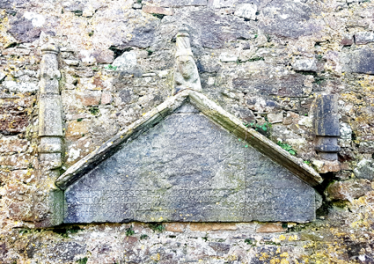 The church’s main light sources were a high lancet window on the east wall and another window on the south side. It must have been quite a dark church when it still had a roof. 18

The church also serves as the site of the 17th century O’Brien/Butler altar  monument and tomb dedicated to Sir Turlogh O’Brien and his wife Eleanor Butler. Sir Turlogh was the father of the Right Rev. Murtogh (Maurice) Brien, chief of his name and the first Protestant Bishop of Killaloe 1570 – 1612.19 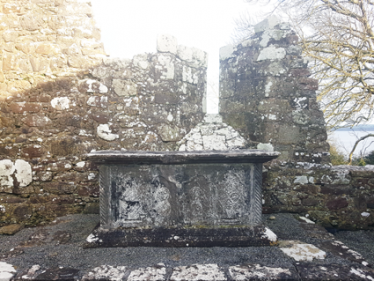 Interestingly the altar was moved to Whitegate church in the 17th century by members of the Burke family but was returned by Rev. M. J. Kenny P.P. Scariff to the island in 1882. 20

St. Michael’s church, also known as St. Michael’s Garden, was once thought to have been the site of an ancient ring fort, built on a D-shaped enclosure of approx. one acre on the highest point of the island.

Macalister marked on his map of the ‘monastic sites and historic remains’ the position of St. Michael’s church: located in a small quadrangular enclosure within the D-shaped one. However, excavations of the area have never shown any material linked with people living there, and the area has no evidence of a monastic use either. 21

It was, however, a cillín, a burial ground for unbaptised children and also a place where people, suffering from deadly diseases, were taken to.

Known as “Garaidh Mhichaeil” (Michael’s Garden) as shown on the Ordnance Survey maps it was one of the few cillíní that have ever been excavated.

Now all that remains are the thorn bushes on the north-west side of the area and stones and a hilly earth bank that mark the place.

A flat stone known as the ‘kissing stone’ can be found inside this place where the church had been and was visited by the pilgrims. 22

6. The Church of the Wounded Men 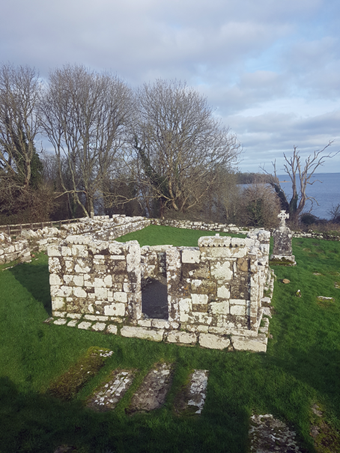 We find this unique Romanesque church also known as the Oratory in the Saint’s graveyard near St. Caimins church. It was built at the end of the 12th or early 13th century.

The building itself is unusual because it has three doorways, an oddity due to its small size.

While its original purpose is not known the church seems to have connections with a high cross which at one point stood in the graveyard, on which base was written ILAD I DECHENBOIR – the tomb of ten men 23 but could also have connections to the motto of the O’Grady family: ‘Vulneratus non victus’. (Wounded but not defeated).

The structure is also known as the O’Grady Mortuary Chapel. 24

Interestingly, it also seems that the church might have been for men’s use only due to a O’Grady curse. According to a tradition recorded by the antiquarian R. R. Brash (published in ‘The Gentleman’s Magazine, 1866’), ‘Any woman entering the church would do so under the curse of barrenness.’ 25