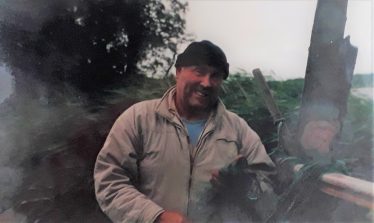 My home is Coonagh on the north shore of the Shannon Estuary in County Limerick.  It is an area rich in history. However, apart from folklore it is only recently that the residents, many of whom are new to the community, are getting to know the village’s history.

Living on the banks of the River Shannon, beachcombing was a major part of my education from a young age, although at the time I was not fully aware of its significance.  The Shannon downstream from Limerick contained every item of interest in the daily activity of all facets of society – good and bad – lost intentionally by voluntary or unintentional dumping.

Béaloideas was a traditional method of passing on the history and folklore in Irish communities but much of these stories can be lost due to the reticence of narrators to comment on events such as famine and the politics of Civil War, etc. This can leave gaps in the telling of happenings. However with advances in research and modern archaeological technology we can fill in some of the missing information.

Coonagh is historically and geographically located in the cockpit of active happening which was an engine in the formation of our Nation, down through the millennia.  In this following account I explore some of the features and life of my homeland. 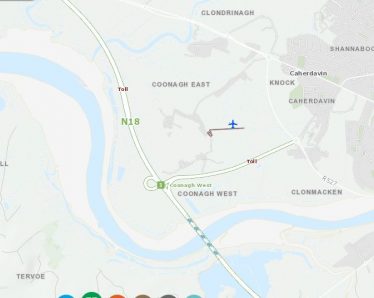 Map showing townlands of Coonagh and District. Data from the OSI public basemap gallery accessed through the Heritage Maps Viewer at www.heritagemaps.ie, [29-1-2020]’.

Historically, the townlands are located in the Barony of the North Liberties of Limerick, and the Civil Parish of Killeely. Up until 2008 Coonagh was part of County Limerick, but was incorporated into Limerick City boundaries at that time.

For present-day religious administration it is part of the Roman Catholic parish of Parteen, Meelick and Shannon Banks.

It was for a time in St Munchins and for a short time in Cratloe (RC parish).

To compound the historic confusion the Earl of Bunratty, Barnaby (Bernabus) had a castle in Cooreen, Coonagh, before he departed for Grimsby England, where he died.

The townland borders were naturally formed to the west by the Crompaun River (also known as the Meelick Creek) and to the east by Clonmocken Creek rivers which were tidal and tributaries of the River Shannon – which was the southern boundary of the townland.

Coonagh townland (east and west) is surrounded by the townlands of Meelick to the west, Clondrinagh, Caherdavin, and Clonmacken to the east and the Shannon River to the south.

The N18 Limerick Southern Ring Road, runs from south to north, through Coonagh from the Shannon River to the Crompaun River.  It passes under the Shannon through the Limerick Tunnel on the southern boundary of Coonagh.

Research connected with the building of the Shannon River Road tunnel turned up many centuries’ old early maps. In some of the maps we see a specific Shannon River placename called ‘Coonagh Point’. It is situated in a stretch of the tidal estuary which is known to mariners from the navigation charts as ‘The Narrows’.  The Gaelic word ‘Cuanach’ derives from the unique natural features of this area and translates as ‘a winding estuary’.

Many early maps of the Shannon Estuary were drawn up to facilitate navigation. These maps show several locations where river crossing ferries operated

Before the Tunnel was built and opened in 2010, archaeological excavations were undertaken.

Many artefacts were recovered and this writer was privileged to be present in real time at some of the ‘finds’ such as several Fulacht fia, 6th century religious brooch and a Queen Elizabeth I silver sixpence piece. Other finds included pennanular ring pins, several post-medieval brick-making kilns, and saddle querns.

These finds show that people were living in Coonagh since the Stone Age. Weapons and artefacts, including axeheads and knives were found. Evidence of early metal working, tanning of leather and spinning of wool were uncovered.

At Coonagh West an Early Medieval ditched enclosure, 40m in diameter was uncovered. It was sited on a glacial hill above the surrounding wet landscape. It showed evidence of internal houses and a 27m trackway to the river.

The 1654-56 Civil Survey of recorded that Barnaby Earl of Thomond and Sir Nicholas Comyne of Limerick held in Counigh [Coonagh] ‘2 fishing weares upon the sd River of Shannon whereof the one moytie belongeth to the sd Earle, and the other moity to the sd Sr. Nichollas’ (Simington 1938, 451). 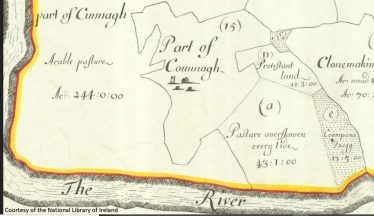 A castle, annotated ‘Counagh’, on the Down Survey Map of 1657 is depicted as a tower house type structure standing beside a cluster of dwellings (NLI, MS 718).

Shannon Rugby Football Club Pitch now stands of the site of the castle.

In later times, Vikings, military and naval marauders were common on the shores of the Shannon at Coonagh.

Because of its proximity to the River Shannon, the people of Coonagh have always used the bounty of the river. Salmon fishing, osierys, reed cutting, brick making and farming was the traditional way of life. 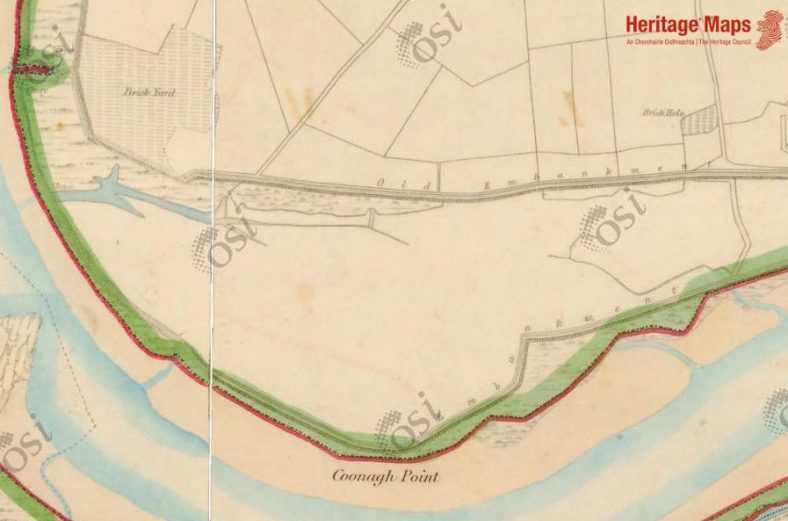 And several specific placenames connected to these activities survive today. 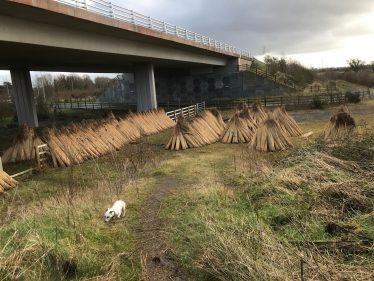 Reeds harvested from the River Shannon at Coonagh. Photo by Patrick Peril

Some other local placenames are connected to landscape features:

Language, including gaelic and foreign came down through the ages – and a strange word, sometimes only known to the speaker would be mentioned during conversations concerning local traditional activities.  These include: