The Glen - The Gap to Garraunboy- a townland study 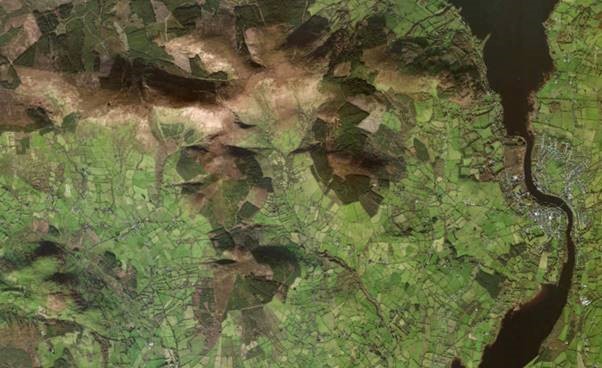 I chose this area for my ‘Reading Your Local Landscape’ project, because of its natural beauty among the rolling fields and hedgerows full of wild native shrubs. It’s not unheard of to make a chance encounter with deer, fox, hares, badgers, red squirrel, sparrow hawks  and of late buzzards have become a common sight. I’ve even found a roadside bank that has a large colony of mining bees which seems to be doing very well.

The Glen nestles in the foothills of the Slieve Bernagh mountains with Moylussa looming over its northern point and is about 5 kilometres west of Killaloe. It is made up of and is surrounded by a group of townlands.  Townlands are the smallest and most ancient form of territorial units in rural Ireland dating back hundreds of years to the ancient clan system before the arrival of the Normans in the 12th century.

The names of the townlands are derived from landscape features such as farming activity, flora and fauna. While researching  the Irish names of the Glen I came across several different spellings

Most of the names are anglicised these days and we don’t even think about their original Irish language meanings, even though they tell us so much about an area. For example, my own townland is Ballygarreen, which is originally Baile Ui Ghirrin  “The townland of the little mounds” which are indeed plentiful in this area.   My favourite townland name is the neighbouring townland Gortcallyroe  or Gort na Caillighe Rua  – “field of the redhaired witches”. Legend has it that 3 witches lived here, and men were not allowed to enter their property except for once a year when the local tailor was admitted to measure them up for new dresses. Perhaps they were early feminists?

Early man left his mark on the landscape all over the Glen, and the area is speckled with a selection  of ancient monuments, habitation, ceremonial and burial sites. Standing stones are listed on the monuments map, though sadly they have been gone for some time now. 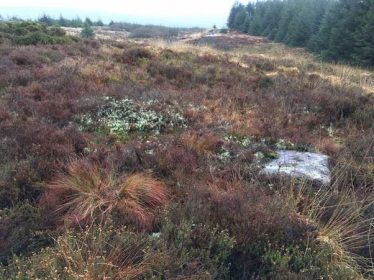 On one of the higher peaks of Lackareagh mountain is the site of Diarmuid and Gráinne’s  bed. Gráinne was the daughter of Cormac MacAirt, High King of Ireland. She was to marry the then aged chieftain of the Fianna, Fionn MacCool, but at her wedding feast she met and fell in love with Diarmuid, who was one of Fionn’s warriors. They fled and spent their short few years together on the run and this is reported as one of their hide outs. Now the site is surrounded by managed woodland but back then it was covered in ancient oak forests.

A little further down the valley from Diarmuid and Gráinne’s bed,  just off the road in the townland of Lackareagh Beg, there is a fulacht fiadh. It is not readily visible as it is on private land and quite overgrown. 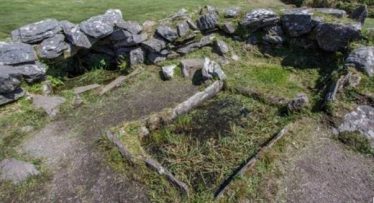 Dating back to the bronze age (c. 2400 – 500 BC.), fulacht fiadh were ancient cooking places or field kitchen of the Fianna,  also known as burnt mounds. They are  usually found in boggy places close to a water source.  They consisted of a fire pit and a rectangular shaped waterfilled trough and were surrounded by a horseshoe shape mound made up of stones discarded from the fire. The water in the trough was heated by stones from the fire. Meat could have been cooked in the boiling water and there is also some evidence that these sites were used for bathing or even brewing ale. Similar to today’s micro-breweries. In pre-history there is thought to have been about 6000 of these in the country. 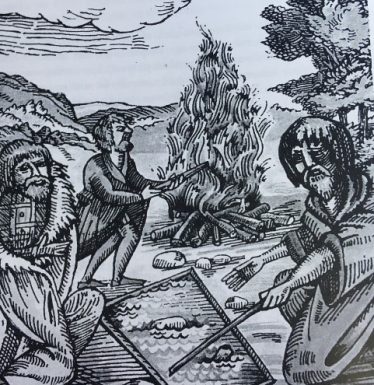 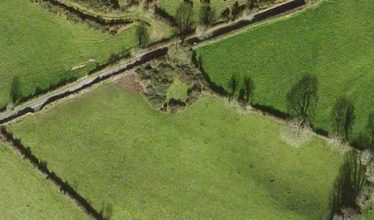 An enclosure in Ballygareen. Data from accessed through the Heritage Maps Viewer at www.heritagemaps.ie, 15/02/2020.

Between Aillemore and Garraunboy church and without traveling too far from the road, there are ten enclosures possibly dating to the early medieval period of history.  An enclosure is defined by a circular raised earthen bank or stone wall with a single entrance and judging by their size, these ones would have been used for holding cattle. Cattle at this time in history would have been an indicator of wealth and were highly prized, and so required protection from predators and thieves. Some enclosures could have also contained small huts.

A lot of the families that live in the Glen today are descended from the turbulent times of Cromwell’s conquest of Ireland from 1649-1653. When rich Munster pasturelands were confiscated by Cromwell, the owners had only two choices  left to them –   “To hell or to Connacht”. Co. Clare had only recently been returned to Munster in 1639 having been officially part of Connacht for the previous 60 years. People being transplanted off their lands and heading west would set a route through the Glen, it being a natural gap through the hills. Many saw no need to go further.

From hedge school to school house

Each townland in the Glen had at least one clachan. A clachan is a cluster of dwellings, cottages or mud huts and was often occupied by single extended family. On my search for these clachans on the first editions six-inch Ordnance Survey map c.1840, I counted over 250 small dwellings in the Glen, so it was a much  larger population at that time than it is today. What really struck me however was the listing of three schools on that map.

The Penal laws were lifted in Ireland at the end of the 18th century. Up until that time, education for Catholics was illegal, so these schools would have been transient hedge schools. The term hedge school is a bit misleading because they could have been mud huts, sheds,  cabins or any form of shelter. The school buildings shown on the 1840 map would have replaced these hedge schools and indeed the Ballygareen school’s headmaster in 1838, Dennis Cummins, was a renowned local hedge schoolteacher.* This particular school counted 130 pupils and was a schoolhouse by day and cowshed by night.

Families would have had to find some means to contribute in order to avail of this new education system, either in cash or food. It is fascinating that there would have been such a demand for learning. This was a time of great poverty and hunger, but people were still driven to find ways to educate their children.

The Glen school that can be seen today was built in 1858, it remained opened on and off until 1966.

*{Sean Kierse: Education in The Parish of Killaloe}

Townlands are  fascinating because they tell us so much about  the history and  the customs of an area. They are a living link to generations of those gone before us and an integral part of our heritage to be passed on to future generations.

“If a nation’s culture survives, then so too does the nation*”

If you are interested in finding out more about your own townlands, there is a wealth of information to be found on  http://www.townlands.ie or http://www.logainm.ie