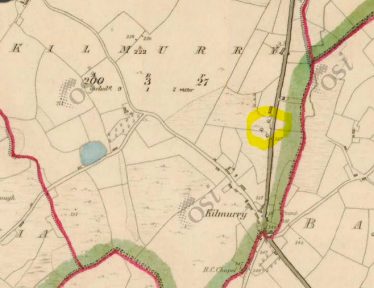 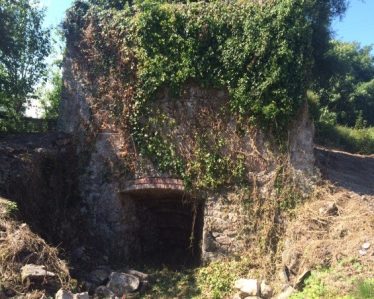 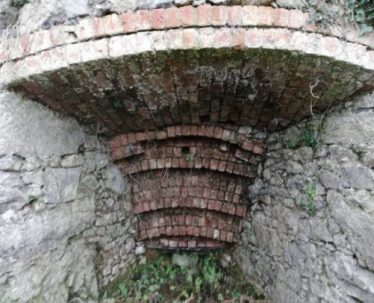 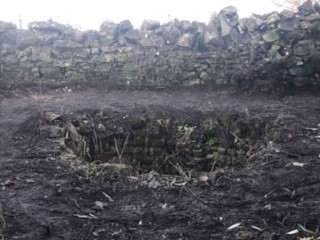 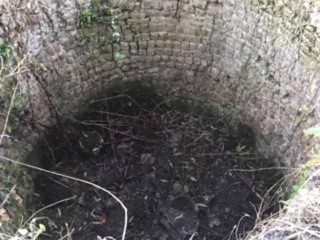 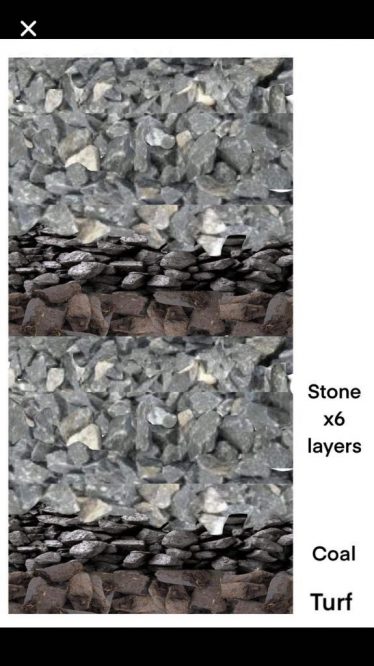 zoom
Diagram of Layers of stone, coal and turf in kiln before burning
Caelum Frazer 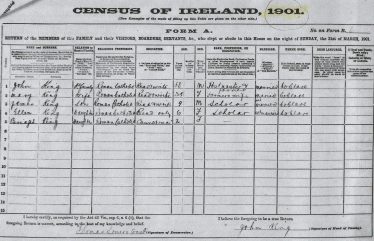 zoom
Entry for King Family in 1901 Census of Ireland 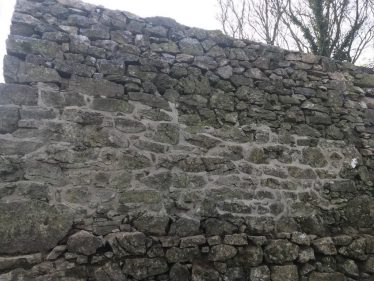 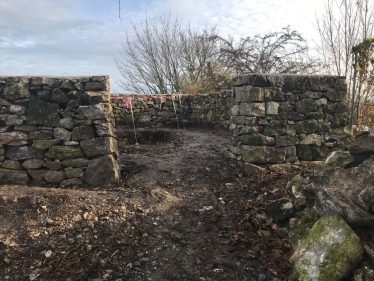 Kilmurry lime kiln is located in the south east of the county on the R462 road between Kilkishen to the North and Sixmilebridge to the south,  between Kilmurry N.S. and the former Kilmurry Post Office. Kilmurry is in the parish of Sixmilebridge and the Barony of Bunratty Lower.

History of the Kiln

This once magnificent Lime Kiln is recorded on both the 1840 six-inch and 1895 twenty-five inch Ordnance Survey maps. Therefore we can date it’s construction to before c.1840. The earlier map shows three kilns but in the second edition six-inch Ordnance Survey map c. 1920 there is only one kiln marked.  This is the kiln that still exists today.

I own the remaining kiln and am the 5th generation of family owners. It was last worked by my grand uncle James (Jim) King in and around 1920. Before this, his father and grandfather, both John Kings, worked the Kiln.

Griffith’s Valuation carried out between 1825-44 records that the kilns were rented by John King from Thomas Studdert. Thomas Studdert (b. 1785 d. 1870) owned Bunratty Castle and the family acquired the Kilkishen Estate which included Kilmurry through marriage of his grandfather, also Thomas (b.1696) to Madame Cusack. The King family also owned the local Post Office which closed on October 31, 2007 which is shown on the maps.

The Structure of the Kiln

Limestone was quarried from the local area and transported to the kiln. Previously the quarry, from which the limestone was extracted, extended into what is now the school grounds. The kiln is built from limestone probably extracted from this quarry. It is in very irregular shapes and is possibly residue from blasting in the quarry. The wall seems to be filled with earth or lime mortar some of which has clearly washed out. The lining of the pot, and the supporting arch for the draw hole are formed from fired red bricks, which is ideal due to the high temperature resistance of the bricks. There is a beautifully constructed and rare brick arch above the draw hole of the kiln. The internal pot of the kiln is also built with the same brick.

How the Lime was produced

First a layer of turf was placed at the bottom of the kiln, followed by a layer of coal transported from Kilkenny pits. Next six layers of limestone were placed on top and repeated until the kiln was filled. Then the turf was kindled by a bucket of fire. It was the custom to burn on a Friday. After a few days the lime was fit to be sold at approx… 3 shillings per barrel. The lime was used to fertilize the land and to white wash houses and also as a disinfectant for farm sheds.

Currently conservation work is being carried out on the kiln (February 2020). Work started in Oct 2019 and is being carried out by stone mason Mr. Eoin Madigan supervised by Mr. James Powell, Conservation Consultant. Phase I is now complete. The pot and the two front walls have yet to be completed and also the surrounding site work. It will take a couple of years before all of this is complete. The project is being funded by the Heritage Council and Creative Ireland through the ‘Adopt a Monument’ Scheme.

At one time, there were over 8,000 agricultural and building lime kilns dotted around the country but now only a fraction remain, many of which are in ruin. In the past, lime that was produced in these kilns was used not only for building but was also spread on the land to sweeten the grass, made into white wash to sanitise farmyards and outbuildings, put into wells to purify the water and even used to illuminate our theatres hence the saying (in the lime light!).

Sadly, with the arrival of modern materials such as cement for building and fertilisers for the land, this once vital part of the community slowly descended into neglect and over time was forgotten about entirely. But with this conservation project in Kilmurry village, we hope to retain this vital part of our local heritage for future generations.