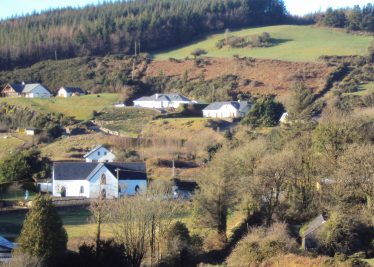 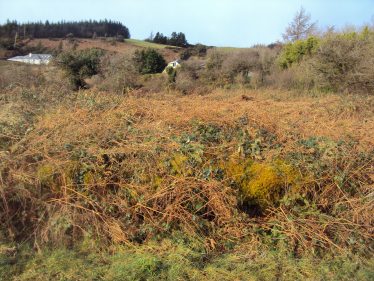 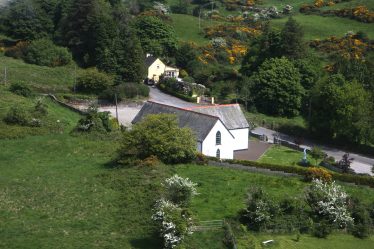 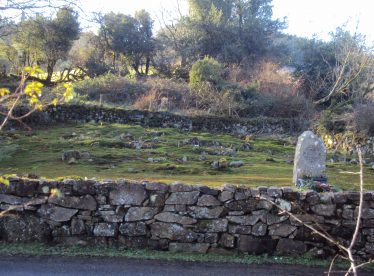 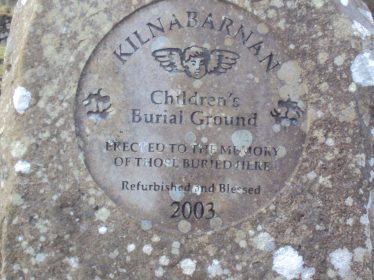 The aim of this project is to discover evidence of human footprints over time, in and near the Gap of Ogonnelloe in the townland of Ballyloughnane.  The townland of Ballyloughnane (sometimes referred to as Ballylaghnan) is situated in the centre of the parish of Ogonnelloe.  It borders six townlands and consists of 517.75 acres.   Its most northerly point is known as the The Gap which is located in the opening between two hills where it joins Bealkelly (Purdon) townland.  The parish of Ogonnelloe is situated in east Clare on the south-west of Lough Derg, between Killaloe and Tuamgraney.  The name ‘Ogonnelloe’ comes from the tribe of Ui gConghaile who on the introduction of surnames took the name of the O’Durack as referred to in O’Huidhrín’s topographical poem of 1307.[1]  For over two hundred years the Purdons were landlords of most of Ogonnelloe.  In the early 1920s they sold Tinerana House and demesne to the Gleeson family from Westmeath.

The first known evidence of human activity in the vicinity of Ballyloughnane is the wedge –shaped gallery grave in neighbouring Bealkelly (Purdon) probably dating from c 4,500 years ago.  Burial chambers such as this are generally wedge-shaped, have two side stones and one capstone, face to south-west and decrease in height and width to the east.[2]  They were built in the last phase of megalithic tomb building.  In a survey in the 1960s, the gallery grave in Bealkelly was described as being 800-900 feet above sea level, overgrown and mostly in ruins.[3]  Its condition at present is not known as it is difficult to access due to a large area being covered in forestry.

Ballyloughnane ringfort is located close to St. Mary’s Church.  The recorded ringforts in County Clare mostly date from the early Christian /early medieval period (500-900A.D)[4] although some may have been in use centuries later.  The 1840s description of Ballyloughnane ringfort indicates that it was about two and a quarter chains in diameter, having a stone and earthen bank five feet high, with a green flat surface.[5]  Interestingly it was described as having a souterrain or a cave extending into a cultivated field to its north.  No local knowledge is available concerning the existence of this souterrain.  The ringfort itself is generally in good condition with the wide stone/earthen bank mostly intact.

St. Mary’s Church (formerly known as the Old Church) was built near the Gap of Ogonnelloe in 1801 at a cost of about £500 and had the capacity to hold a thousand people.[6]  This cruciform building had a thatched roof and very low walls.[7]  Being the first substantial church building in the parish, it served a variety of functions, including that of school in 1808 and as a venue for a political meeting with O’Gorman Mahon, a Daniel O’Connell supporter, in 1828.[8]  Over the decades, some substantial renovations were carried out, such as in the 1880s when the walls were raised, earthen floors were replaced with wooden ones, seating and three galleries were introduced and the thatched roof was replaced with Killaloe slate.[9]  In 1959, the wooden floors were replaced with concrete, the   galleries were removed, and electricity, new wooden windows and doors and were installed.  Prior to bi-centenary celebrations in 2001, Clare County Council declared it a protected structure.

Ballyloughnane National School is also located close to St. Mary’s Church.  When it opened in 1857, it was the first school built near the Gap of Ogonnelloe under the national system.  The building was 30 feet long, 16 feet wide and 10 ½ feet high.  It had a slated roof, four windows and was plastered and whitewashed inside and outside.[10]  It was one of three national schools in Ogonnelloe at that time; all located in strategic positions because students travelled on foot, each serving approximately 6-7 townlands.  During the lifespan of Ballyloughnane School (1857 – 1949), five principal teachers and a variety of monitors taught there.[11]  Its closure in 1949 brought an end to the tradition of schools being located at the Gap of Ogonnelloe over the previous 150 years.

In the early 1880s a dispensary was opened in Ballyloughnane as part of Annacarriga dispensary district.[12]  It was located close to the national school.  This was the first time that the people of Ballyloughnane townland and its hinterland were able to avail of medical help provided by a doctor in this way.  The dispensary continued to be used by adults and children until the 1950s by which time the building was closed as it was in poor condition.  The remains of the building are still visible.

The cillín (children’s burial ground) at the Gap of Ogonnelloe is called Kilnabarnan (Church of the Gap).  It was referred to as a ‘small Kyle or cesspit’ in the mid nineteenth century.[13]  There is no evidence of a church there but it continued in use as a burial place for stillborn children until the 1960s.  It was very overgrown until 2003, when a local group of volunteers cleared the undergrowth and repaired the boundary walls.  Since then it has been included in the annual Blessing of the Graves.