A Nature Lover at Fanore 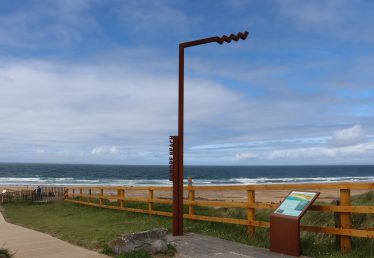 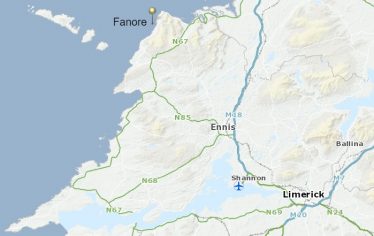 The Caher River, the only river in the Burren to run overground from source to sea, splits the beach before joining the ocean. The area is part of The Burren and Cliffs of Moher UNESCO Global Geopark.

Surfers and bathers enjoy the clean golden sands and powerful waves at this Blue Flag beach but for me the draw is the rich biodiversity of the area. There is a great variety of habitat and species in this Special Area of Conservation (SAC) site.

I am not going to attempt to list all there is to see, but hopefully enough for you to glimpse what a special place it is. 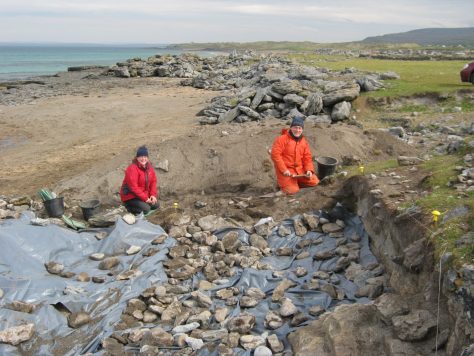 More than 6,000 years ago, this spot was appreciated by hunter-gatherers who lived in the Burren before Neolithic farmers started to settle and leave their traces on the land. These nomadic people would have visited Fanore to catch and cook shellfish and maybe gather salt. They may have fished in the nearby Caher river and gathered nuts, herbs and berries.

There had been no records of Mesolithic activity in County Clare until remains of two shell  middens were excavated by Michael Lynch and his team at Fanore between 2009 and 2013.  Accumulations of the remains of shellfish, burnt hazel nuts, stone tools and flakes were revealed where the Mesolithic people had camped and prepared their food.

This is the oldest settlement in Clare. We have always thought hunter-gatherers existed in Clare but this is the first real evidence of that.” Michael Lynch, Field Monument Adviser for County Clare. May 2012. 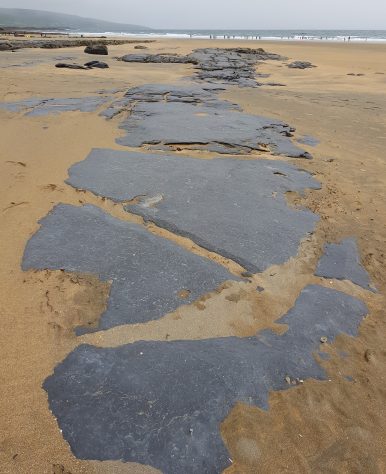 From the beach there are stunning views of limestone pavement on the surrounding hills. The surface of the limestone is subject to weathering and colonised by lichens.

Towards the middle of the beach, the limestone pavement is exposed. Here the limestone is washed by sea water and polished by the sand to a smooth black and many fossils are visible.

Where the Caher River meets the beach, deposits of calcium carbonate can be seen on the rocks.

On the south side of the beach more limestone is exposed. Here though it is a different story. Instead of being smooth, the 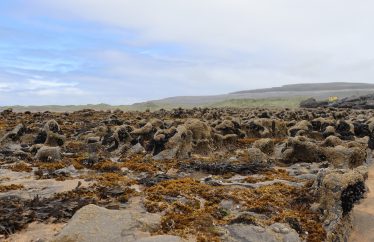 limestone is rough and pitted with hollows and pinnacles. This is known as Biokarst.

When the tide comes in this area is eroded by organisms that live in the intertidal zone (the area where the ocean meets the land between low and high tides).

A sight to stir the imagination when visiting the Burren, is the presence of huge boulders seemingly dropped at random on the landscape. 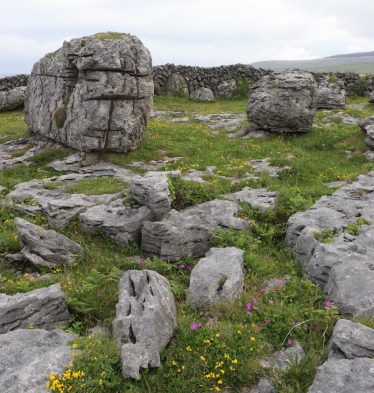 Known as Glacial Erratics, they were picked up and carried along by ice sheets during the last Ice Age. When the ice melted they were left scattered on the land.

The Erratics take their name from the Latin word errare – to wander. Look closely and you will see many plants making their home in the nooks and crannies of these boulders.

Low tide is a good time to have a look into and around rockpools. You will see vast numbers of dog whelks, young common mussels, barnacles, limpets and periwinkles. Many varieties of seaweed can be seen, along with sea anemones and a little fish called the common blenny. 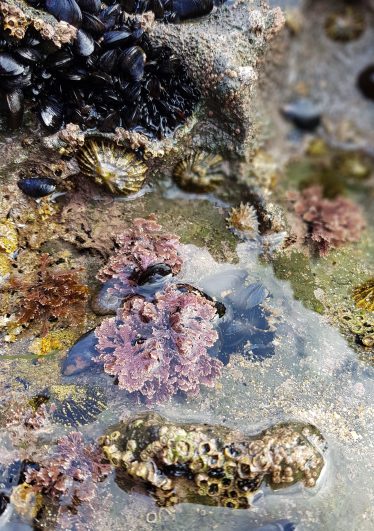 Dog whelks are carnivorous snails and voracious predators. They drill into the shell of mussels and barnacles and inject a chemical to dissolve the flesh inside the shell to a liquid which they suck out.

Down by the shore, you will notice some huge boulders. These get thrown up and moved around in the wild winter storms – a testament to the power and strength of the Atlantic Ocean.

Fanore sand dunes are an outstanding feature and an Annex I habitat ‘fixed coastal dunes with herbaceous vegetation’ protected by the European Habitats Directive.

The name Fanore probably comes from Fan Óir, ‘The Golden Slope’. Over the past 5,000 years, the dunes have been created by the 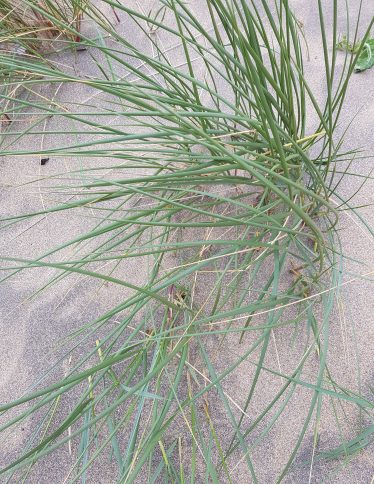 force of the south westerly winds blowing sand up the beach and over the underlying limestone.

Marram and couch grasses, along with other plants, such as sea holly, help to bind the dune sands.

Threats to this precious habitat include winter storms, overuse by humans and the constant expansion of rabbit burrows.

Clare County Council run a conservation programme in the section of dunes south of the Caher river. This includes soft fencing to discourage recreational use, efforts to protect and nurture the marram grass and monitor the effect of the rabbit population. 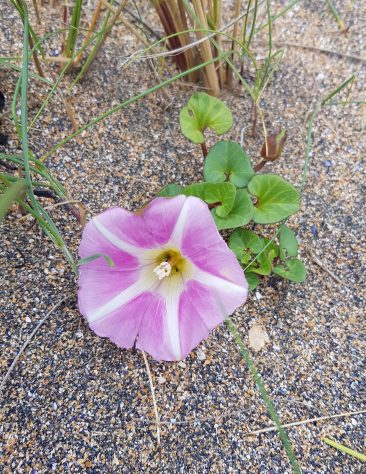 The dunes are home to many beautiful plants. The stems of Sea Bindweed often appear buried in the sand as it spreads by means of underground rhizomes. This pretty plant can help to stabilise dune systems. The white lines act as a runway to help pollinators travel to the centre of the flower.

The yellow Lady’s Bedstraw is profuse in high summer giving out a fresh scent of hay meadows. As you may have guessed from the name, this was traditionally used to stuff mattresses.

Another wildflower of the dunes, the Sand Pansy, is a rarity and the population in Ireland is important in a Europe wide context. 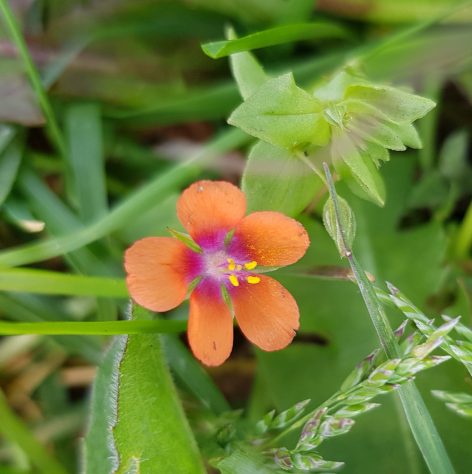 The cheerful little Scarlet Pimpernel is a favourite of mine. It is a flower that likes the sunshine but will close over when the weather deteriorates, giving it the name in folklore of Poor Man’s Barometer.

Niall MacCoitir, in his fascinating book ‘Ireland’s Wild Plants, Myths, Legends and Folklore’ has this to say:

“The scarlet pimpernel, with its blood-red flowers, was seen as a source of magical energy and life. It was also an important herb used for a wide variety of complaints in traditional medicine, particularly to dispel sadness and to counteract venomous bites.” 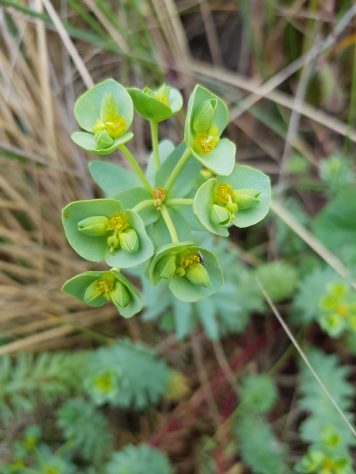 Sea Spurge is a common plant of sand dunes and coastal areas. It flowers between June and October and has fleshy leaves that help the plant to retain water in the arid conditions in which it thrives. Sea Spurge produces a milky white sap which is toxic; in other parts of the world, these saps have been used to tip poisoned arrows.

Other habitats near the beach allow a host of plants to thrive including spring gentians, various species of orchid, kidney vetch, eyebright, wild thyme, cowslips, milkwort and bird’s foot trefoil.

The song of the male Skylark is a glorious sound. During the breeding season he can begin singing before dawn, the source of our saying ‘up with the lark’. 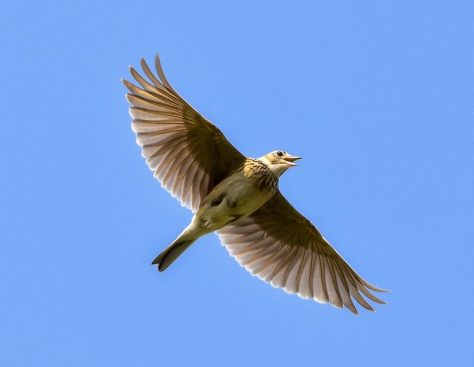 Skylark Image by Cock-Robin from Pixabay

The Skylark flies high in the sky and emits a cascade of notes for up to thirty minutes, before dropping to the ground. He can sing more than 300 different syllables and each individual bird’s song is slightly different.

Unfortunately, changes in farming practices have led to a significant drop in numbers. The birds build their nests on the ground and in the dunes, so it is important to minimise disturbance from humans and dogs during nesting season. 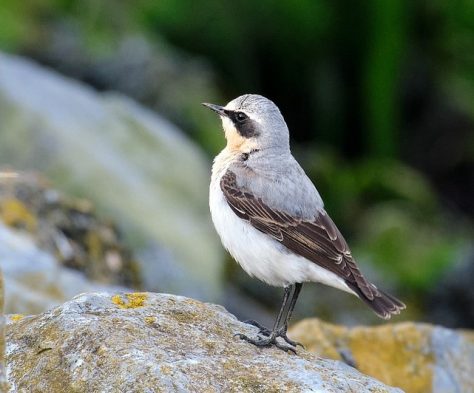 The Wheatear, another favourite of mine, is a summer visitor from southern Africa. It is a striking looking bird, in size between a robin and a song thrush. Hopping around the ground and flitting from rock to rock, it is relatively easy to spot.

It is quite vocal, the Irish name translates roughly as ‘stone bird’ as they give a call that sounds like a ‘chack’, or two stones banging together. The English name translates from old English as ‘white arse’ in reference to the bird’s white rump visible as she flies away. 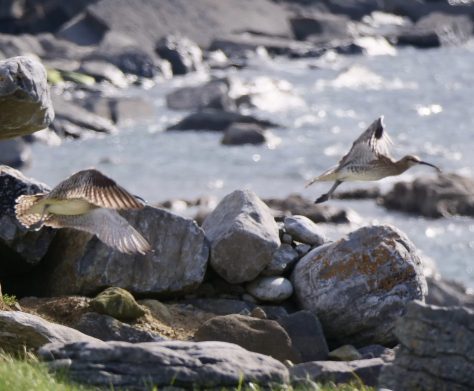 A springtime treat at Fanore is the visit of the Whimbrel.

These birds are passage migrants, breaking their journey from winter quarters in West Africa to breeding grounds in Iceland. They stop to rest for a couple of weeks and feed on crustaceans, molluscs and worms.

Whimbrel are closely related to the curlew but are smaller. They make a lovely piping sound which they use to stay in contact with other members of the flock as they fly overhead.

They were known traditionally as ‘the May bird’, being seen mainly in that month. Some visit in the autumn on their return trip, though most fly directly from Iceland to West Africa. 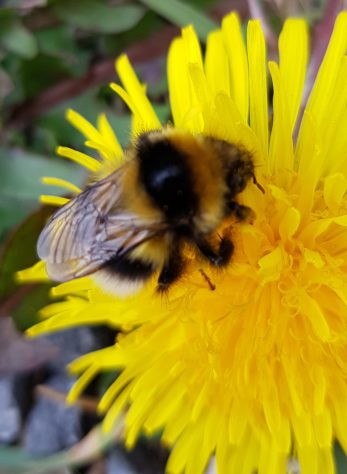 The plants in the dunes and surrounding grasslands attract a number of pollinating insects; bumblebees, butterflies, moths, and hoverflies.

Ireland is home to an amazing 99 species of bee, including 21 species of bumblebee. Although honeybees get most of the publicity, bumblebees are our most important pollinator. The National Biodiversity Centre runs programmes to encourage us to get involved in their conservation.

“One third of our bee species are threatened with extinction from Ireland. This is because we have drastically reduced the amount of food (flowers) and safe nesting sites in our landscapes. This about all of us, from farmers to local authorities, to schools, gardeners and businesses, coming together to try to create an Ireland where pollinators can survive and thrive.” (All-Ireland Pollinator Plan). https://pollinators.ie/ 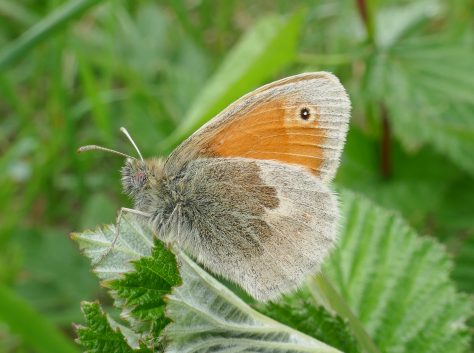 The Small Heath likes the dry habitat of the dunes.  It is the smallest of the browns and is predominantly orange/light brown in colour when seen in flight. It flies only in sunshine and stays relatively low to the ground. The Small Heath has a single eyespot on each wing. One theory of the evolution of eye spots on some butterflies and moths, is that it can deflect attention from the vital parts of the insect’s body, making it easier for the animal to survive an attack by a predator. 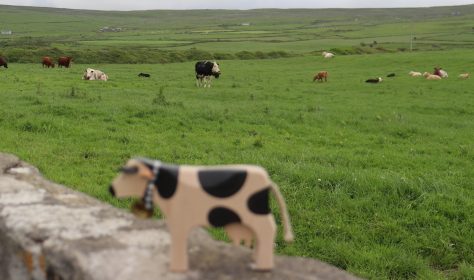 Fanore Caravan Park is the location for Father Ted Episode 7. Set in a very crowded caravan, the Craggy Island priests join Fr Noel Furlong (Graham Norton) and his singing and dancing youth group for the holiday from hell. Fr Ted bravely tries to explain perspective to Dougal, comparing the cows they can see from the window with the model cows he is holding.

All photographs, except where otherwise credited, are by the author, Nuala Kennedy.

There is an interesting Heritage Trail walk at Fanore – HT_Fanore.pdf (burrengeopark.ie)

The Burrenbeo YouTube channel has many interesting talks, including the tale of the Shell Midden excavation.

Archaeology in the Burren With Michael Lynch and Elaine Lynch – YouTube.

The Burren Outdoor Centre runs an excellent evening course in Geology for adults.