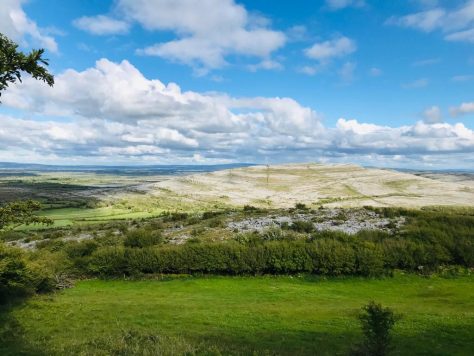 View of the Burren

Nature is a wonderful thing. Since leaving my job as a Tour Guide due to Covid -19, I now observe nature in more detail. Life in the fast lane never allowed me to do so previously. I finished up working in October and decided to go back into Education. I enjoy hiking and this has given me the opportunity to watch the landscape change over the seasons. I live in the Burren National Park; this lets me watch all the flowers come alive. I became fascinated by them and decided to focus on them for my ‘Reading Your Local Landscape’ training course project.

When you pick a flower, you need to be aware that you are taking the seed of that plant, which means that there is less potential for growth the following year. You need therefore to take into consideration how common the flower is before you pick it.  Plants such as daisy, dandelion, yarrow and meadowsweet for example grow in abundance and picking these should not pose a problem. Even still, it is never a good idea to pick a lot of flowers from the same spot. Instead, gather a few from here and a few from there.  There should never be any visible signs left after foraging. Leave no trace.

The flowers that I have included in this project grow in the Burren and many have herbal cures, which are presented here in terms of folklore. The history of herbalism in Ireland goes back many centuries. Herb gardens were grown throughout Ireland. St. Patrick even enrolled St. Brigid and her companions to nurse and administrate this medicine to the sick. The Burren has a wide variety of flowers, firstly the Spring Gentian appears, then the Birds Foot Trefoil and the wide range of Orchid. The following is an account of some of those flowers and their associated herbal folklore and medicinal uses. 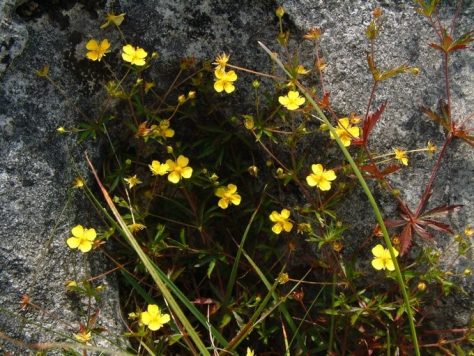 has four-petalled yellow blooms. The Latin word means ‘torment’ or the ‘pains of colic’ and, according to MacCoitir (2015), its roots were once boiled in milk and fed to children and calves as a cure for colic. Growing up to 30 cm in height, it can be found in acid grasslands or along the roadside. It is a low growing plant appearing in May to September. It produces nectar which is important for the bees and was traditionally used to make toothpaste and a type of Schnapps. It can also be used to treat gum disorders. 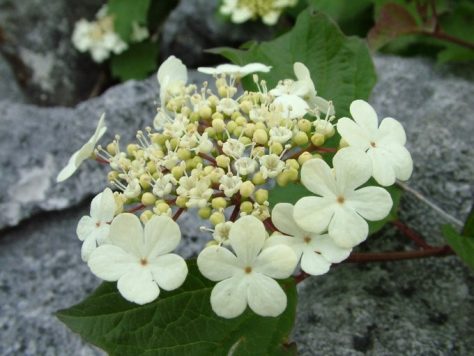 is not a rose but a deciduous shrub. It grows near lakes and in hedgerows. It can reach four metres high. It appears in June and July. Its flower is creamy in colour. They can be found near Lough Bunny in the Burren. The fruit is mildly toxic, but the bark was used for reducing muscle tightness (called ‘cramp bark’). During the Autumn, it produces round bright red berries. They are an important food source for the birds.

It is one of the National symbols of the Ukraine, where it appears in Folk songs and embroidery. Its berries when cooked can be made into jam and jelly. 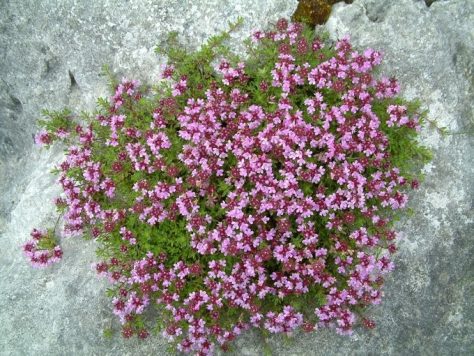 is a great favourite, for people and insects. In folk medicine an infusion of thyme was used as a sedative, for respiratory ailments. It is also a symbol of love

in folklore and it was worn in times past as a way to attract suitors.

In England it was worn by girls to attract admirers. In Scotland it’s scent symbolised strength and courage. Thyme was also associated with the ancient Greece where it was planted on graves and this custom was also carried out by the Welsh. It is a close relative to the Thymus Vulgaris, which is used in cooking. 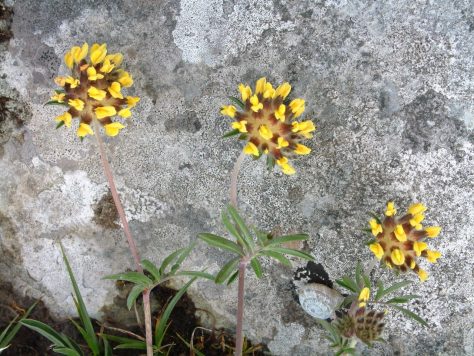 has clusters of yellow flowers, which can also be orange and red. Each flower has their own hairy calyx, containing the sepals. It gives it a woody appearance.  It grows on chalk grasslands and sand dunes, flowering from June to September. The plant covers bare ground in the right conditions.

This plant is a ‘vulnerary’, that is, a plant used to heal wounds and kidney infections. The roots were also used to treat backache. It is a food plant for the small blue butterfly, the rarest of our blue butterflies and our smallest butterfly. 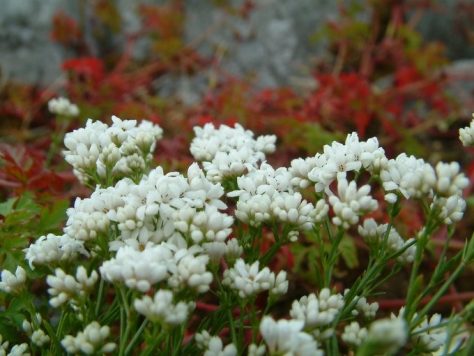 is one of the tinier flowers of the Burren. It flowers in June and July. It likes limestone pastures and sand dunes in the Burren.

This delicate-looking prostrate plant gets its strange name from its use in the past for the treatment of quinsy, a throat ailment and tonsillitis. Its roots were also used to make a red dye. This plant is less common now. 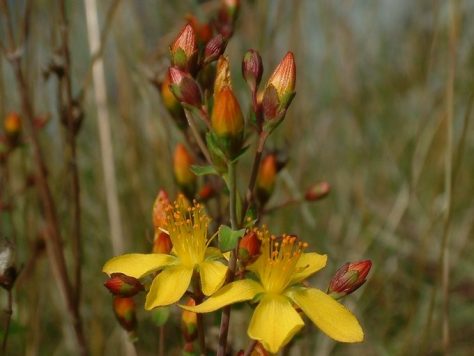 has bright yellow flowers and a red sap.

is one of several St John’s Worts in the Burren. It was widely known as a treatment for melancholia and nervous depression.  Classified as a ‘calcifuge’ i.e., it does not like limy ground, yet is abundant in the grasslands of the Burren. It was believed to be linked to St. John and mid-summer.

An important medicinal herb, it is believed to have powers to get rid of demons. St. John’s wort was hung outside people’s houses and placed in windows to frighten off demons on the St. Johns eve, June 23rd. According to folklore St. Colmcille admired this plant and the following rhyme written about it ‘St Columba’s wort, unsought, unasked, and please God I won’t die tonight’. The plant I also used for fortune telling. Women used it to find out if they would meet their future husband. The plant was twisted around the woman’s finger and if it bled a red sap, she would find love.  But, if it bled a colourless sap there was no hope of romance. It is also used to stop bleeding wounds and was given to children to prevent sickness. 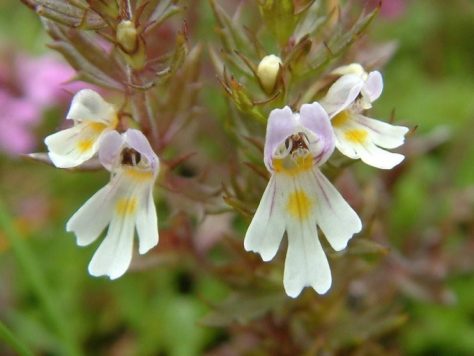 is a Burren specialty with its narrow, bronze-coloured leaves and white flowers with distinctive yellow spot.  It is semi-parasitic in nature. There are over twenty species of this plant. It flowers in June to September in open grasslands and often grows near wild thyme.

Eyebrights were once used to treat eye complaints and restore brightness of vision. In folklore it was believed to counter the ‘evil eye’. In years gone by if you carried eyebright with you, it would help enhance your psychic powers or to know if someone was telling the truth. 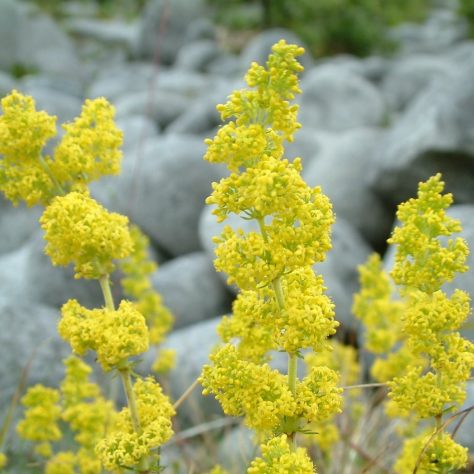 has unmistakable clusters of yellow flowers, which were once used to help induce sleep. Pillows and mattresses were packed with the dried flower, helping keep fleas at bay and to freshen the room. It appears in grasslands and hedgerows between June and September.

It was used to curl milk in cheese making. Its roots are good to colour yarn with. It is also lovely in a brandy, it spices it up. 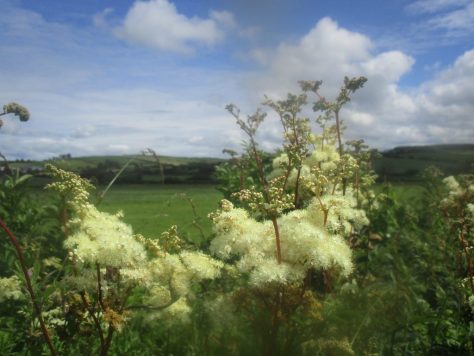 is found in damp areas near streams and meadows. It appears between June and September. It is a five to six petal flower, which are pale yellow in colour in a dense cluster. Bees like this plant for its heavy scent. It grows three to four feet high. It is a member of the rose family, the resemblance can be found in the leaves and the stem.

The Meadowsweet contains Salicylic acid which is extracted by chemists to be used in aspirin as its main ingredient. Aspirin is mainly used as a pain reliever and an anti-inflammatory. Meadowsweet also contains mucilage, ideal for problems relating to the stomach lining, gastritis and stomach ulcers. 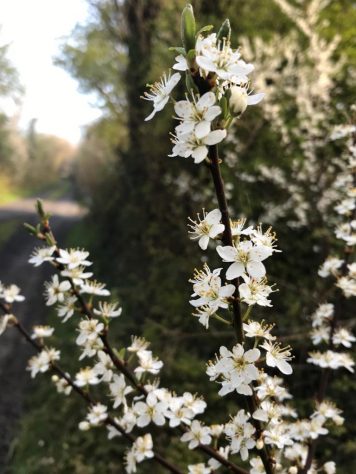 is the most common native tree in Ireland. It has white sickly-sweet flowers from early May. It grows quickly for the first fifteen years of its life. As an ideal barrier for livestock, it has been planted for centuries in hedgerows. When the flowers fade, the haw berries grow, providing a food source for birds and wildlife.

Haws can be made into a jelly, wine vinegar or chutney. It can be used to treat Varicose veins and Spider veins. The Hawthorn berries and leaves are a well-known traditional tonic used to treat heart disease. 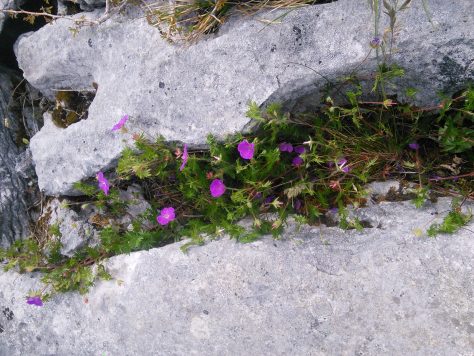 grows in rocky places and on the limestone pavement of the Burren. Appearing between June and August, it is Magenta in colour, and for me it represents the Burren. It has a five petal flower supported on a hairy stem. It can spread twenty centimetres wide and is a favourite for many bees. The leaves go a rusty red colour in the Autumn. It is one of fourteen species of Geranium growing in Ireland.

In Ireland it was used to stop bleeding. It is also used to treat ulcers. When its leaves are crushed, and then rubbed onto the skin it acts as an insect repellent. 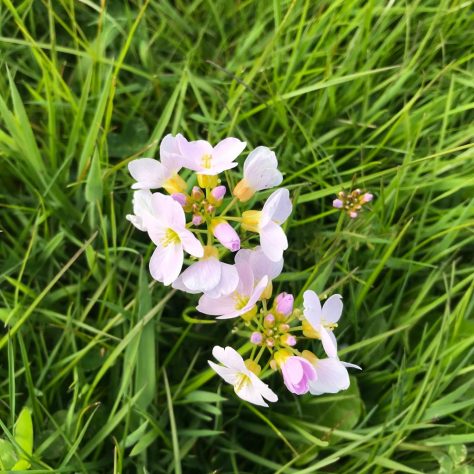 flowers in late spring and early summer. It got its name because it first starts to appear on Lady’s Day on the 25th of March. It is also associated with the start of the cuckoo singing.

The cuckoo flower appears in old Irish legends, Suibhne Geilt or “Mad Sweeney”. He was driven mad by a curse from when he was living in the wild. Its flowering top was considered good for nervous afflictions such as epilepsy and hysteria.

All uncredited photographs are the property of the author.