Take the North Wind to Horse Island.... and see what lies beneath... 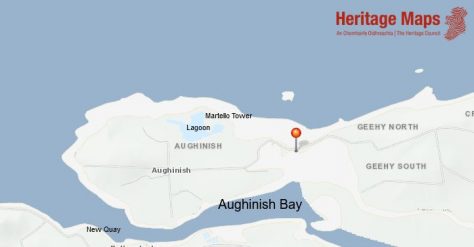 Map of at study area with red pin indicating the boundary between County Galway and County Clare. Data from basemaps gallery accessed on hertiagemaps.ie 23-6-2021.

Between the townlands of Geehy North and Aughinish Island is a man-made causeway dividing Aughinish Bay from Galway Bay.  Geehy North translates as North Wind and Aughinish means Horse Island (www.logainm.ie).  On each side of this causeway, when the tide goes out, there’s a lot going on…..

The following account is a sample of some of the more eye-catching inhabitants to be seen in their own little worlds on the shores of the causeway.

A bit of background

Early in the 19th century, this causeway which links County Galway and County Clare was built to transport materials for the construction of a Martello Tower on Aughinish Island.  Today it provides a lovely vantage point from which to stroll and view Galway Bay to the north and Clare to the south.  You can have one foot in Galway and one in Clare – the county boundary is half-way along the road. 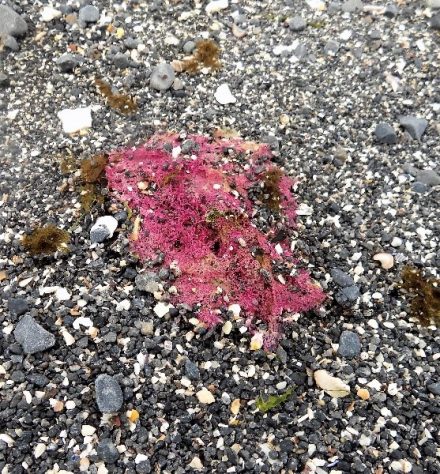 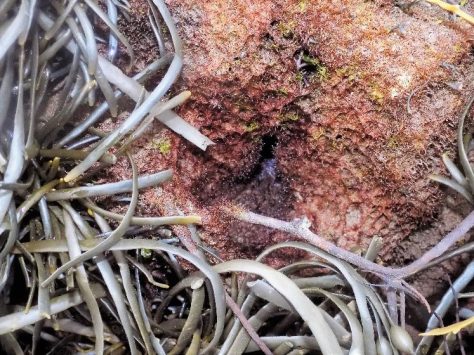 The sand banks on the limestone of Aughinish Bay provided an ideal breeding ground for oysters for hundreds, if not thousands, of years. They were part of the staple diet, preserved or cooked and used as to bulk up stews and soups or baked into loaves of bread.

Once they became popular as an ‘exotic’ food in towns and cities, their value as a source of income increased.  This led to their decline and disappearance in Redbank due to over harvesting combined with disease outbreak in the mid-1900s.  Today, there is a revived oyster and mussel farm and market on the south side of the Bay in New Quay.

This lovely extract from Thomas Cooke, who travelled Co Clare in 1842 describes the scene at the Redbank

“…the extensive Oyster Beds, which supply delicious fish to the tavern in Duke-street, Dublin, celebrated not only for oysters, but for every luxury and comfort to be usually found in such places.–This bed also supplies a great portion of the provinces of Leinster, Munster, and Connaught: it is denominated the Red Bank. Near it stands, on the sea shore, a neat slated cottage, in which oysters, bread, butter, and potatoes are always kept ready, by the direction of the hospitable proprietor, for such strangers or friends as choose to bend their steps thither. It is needless to remark how acceptable such refreshments must be, after a day’s walk to the pedestrian, who, for information or amusement, explores this coast. It is not unusual to see one hundred and fifty girls simultaneously employed on the oyster beds here, either sowing or arranging the shell-fish, or collecting it for the Dublin, or other markets. These young women form a picturesque corps of mermaids, when seen paddling in the shallow water, with red petticoats tucked up as high as their knees, and sometimes even higher..’

The name Redbank comes from the red algae Plocamium cartilagineum  Coral Weed (Corallina officinalis) and Jania Rubens (Corallina Linnaeus) which have a soft reddish rose pink hue.  Both are common on the south side of the causeway and can be spotted under water and on the shore, clinging to rocks when the tide is out.

View of seaweed beds on south shore of causeway

Seaweed is a valuable crop, used for animal feed, fertiliser as well as for beauty and medicinal purposes (including burning kelp to extract iodine).  Some local residents along the shores of South Galway have ‘seaweed rights’.   Their plots or ‘beds’ are marked by rocks to distinguish them from their neighbours.

These dividing lines can still be seen on the topography of the seascape today. Michael Gibbons, archaeologist, believes they may be of late Medieval date.  He described them as the largest and best preserved of their kind on the entire coastline and to be of national importance. (Irish Times, 2013) 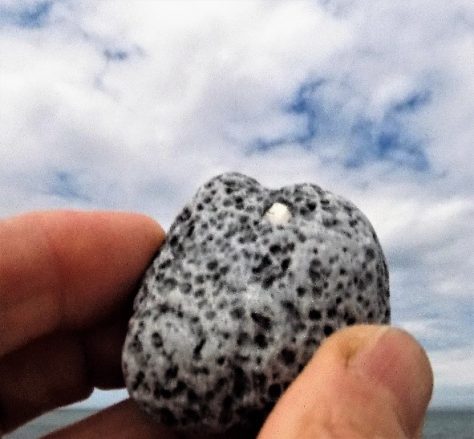 It’s not just the action of the sea which erodes the limestone along the shore.  There are two living creatures which survive in the rock and leave their marks as well! 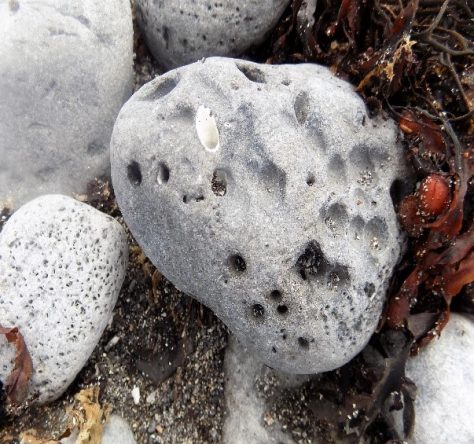 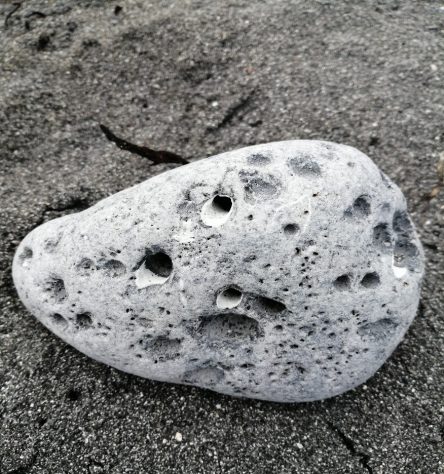 Piddock is a bivalve shellfish which uses a razor edge on its shell to burrow into softer rocks.  Once embedded and safely protected from the sea, it extends its feeding siphons into the water.  It lives its entire life in the rock. When the rock, which it has weakened, erodes, the pock marks and holes that the piddock has made can be seen. 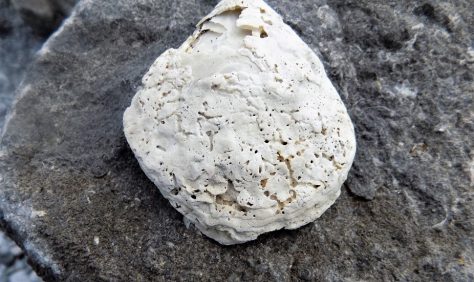 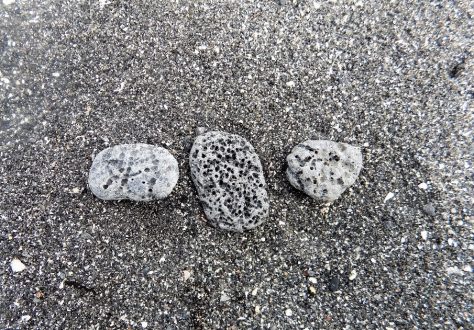 Cliona is a sponge which bores into limestone and other calcareous substrata including shells.  It secretes an acidic chemical which dissolves calcium.  It then inhabits the holes in the rock or shell, and when active, appears as a yellow sponge protruding from the surface.  When its lifecycle is complete, it leaves a series of ‘galleries’ and eventually, when the ‘roof’ of these is worn away, the tracks are visible on the surface of the rock/shell. 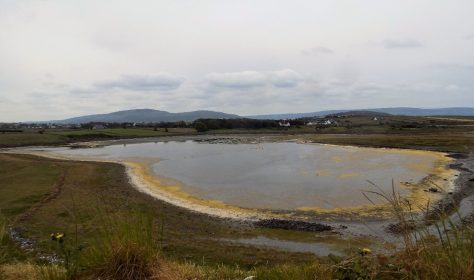 On Aughinish Island, close to the Martello Tower, there is a natural karst limestone lagoon with a sedimentary cobble barrier. The water is saline, being fed from the sea by underground channels.  Lagoons, because of the changing water levels due to tidal flows and evaporation, are limited ecosystems, usually dominated by a few species because of lack of competition and predators.  Sometimes ‘algal blooms’ can occur; that is where the algae in the water grow rapidly and become very visible due to their large numbers. 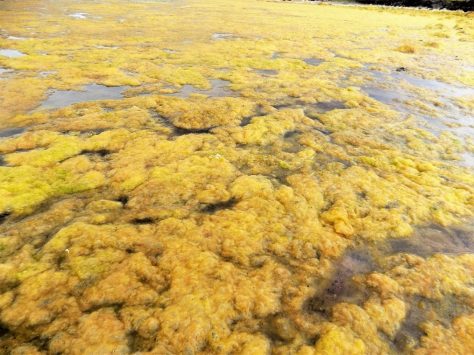 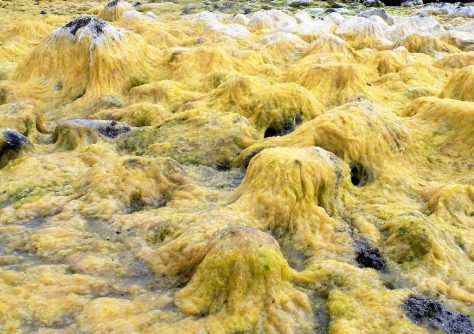 The most dominant and visible algae, Gut Weed or Sea Hair, changes colour as water level, salinity and exposure to sunlight changes.  Starting off underwater as bright, almost neon-lime green, it changes colour from a yellow mustard to almost white when dried up on rocks.  In this stage, when a mass of the algae is floating on the surface of the water, it appears like a pool of yellow gunge, and as it dries out, appears like grey/white hair on the rocks.

Glasswort aka Samphire aka Pickleweed 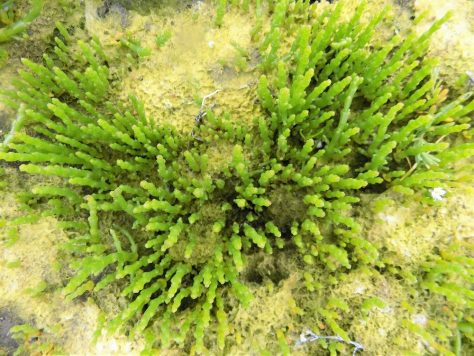 This is annual succulent herbal plant which accumulates salt in its leaves and stems.  Traditionally, it was burnt and its ashes were used in construction and glassmaking because of its bonding qualities and strength.  Species of glasswort are known as samphire and are eaten raw or cooked, pre-dominantly as an accompaniment to seafood. They grow along the shore at the causeway. 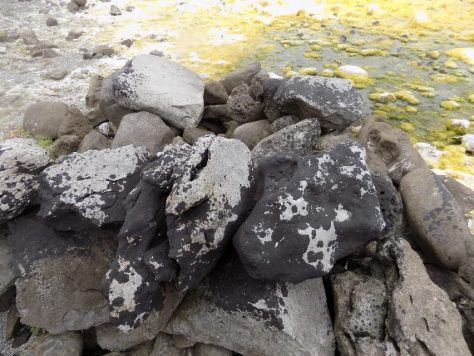 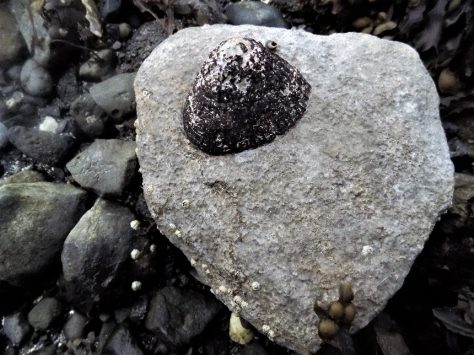 This lichen appears as black splotches and later a dull matt graphite black covering on rocks and shells all along the shoreline in this area.  It looks like a bucket of tar was dropped or thrown randomly or when at an advanced stage, actually painted on! 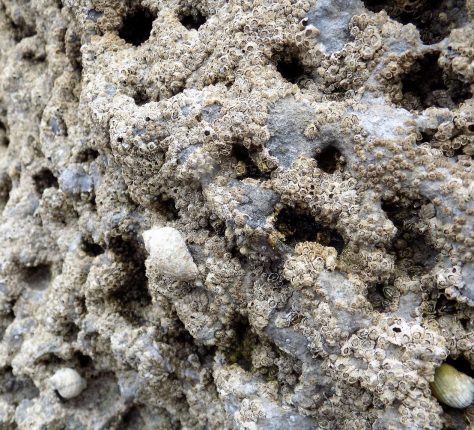 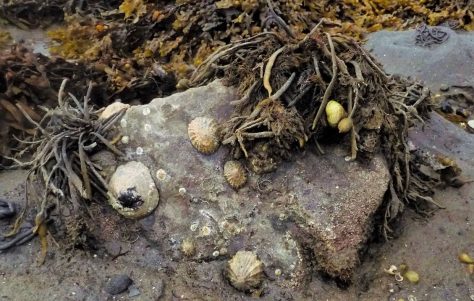 The living creatures on the shores of Aughinish Bay are accomplished home locators – they don’t need planning permission and set up home wherever they can…and co-exist over long periods of time, weathering all storms….this rich biodiversity is well worth exploring!

Trewhella, Steve and Hatcher, Julie. The Essential Guide to Beachcombing and the Strandline (2015)

Special thanks to: Zena Hoctor and all the tutors at LCETB, Dr Cillian Roden and Dr Sabine Springer