A cycle through time…in the south-west Burren 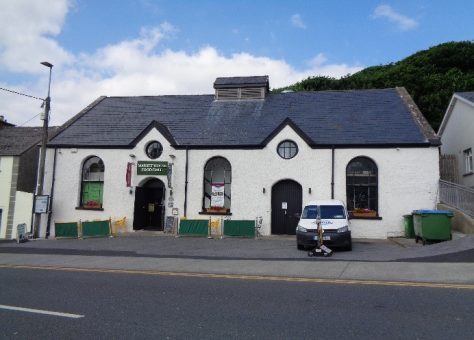 Ennistymon is a market town in North Clare associated with the West Clare railway which operated from Ennis to Lahinch and onto Moyasta from 1887 to 1962. The river Inagh runs through the town and the famous cascades are visible from the bridge and the Falls hotel.

Built in 1887 this building was used to house butter which was contained in firkins. A firkin was a quarter of a barrel and made from wood held together by iron hoops. Butter was an Irish export and was salted to preserve it during the long voyages abroad. The largest butter market was in Cork city and the one in Ennistymon was believed to be the second largest in Munster. The building is presently a café and a butcher shop.

Next section: Ennistymon to An Gorta Mor Memorial: 1km 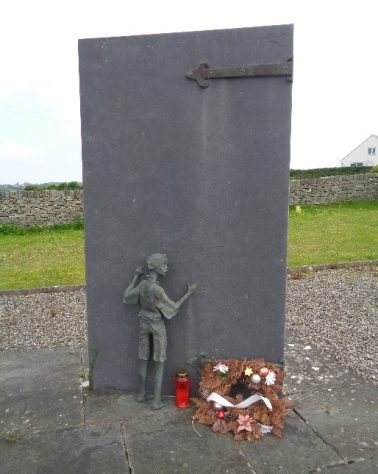 ‘An Gorta Mor’ Memorial on the Ennistymon to Lahinch Road

This two-piece sculpture was made by a sculptor in Kerry. He read about the plight of four-year-old Michael Rice in the original records from the Ennistymon workhouse which was situated across the road from this memorial. When the potato crop failed the workhouse was the only refuge for the throngs of starving people. The piece depicts the boy knocking at the large door of the workhouse and a second piece shows the face of his mother who died just a few days before leaving him orphaned and without a coffin to bury her. It also shows a clenched fist.

Next Section: An Gorta Mor Memorial to Lahinch: 3km 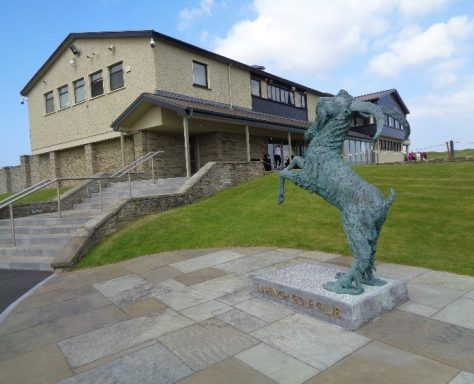 Lahinch was made up of a collection of cabins in the early 1800’s. When the West Clare railway stopped there in 1887 it began to prosper.

The first game of golf was played here on Good Friday, April 15, 1892 and nine holes were played on both sides of the road thanks to Mr. Shaw and Mr. Plummer who realised its potential. It along with the railway gave a huge economic boost to the town as hotels, restaurants and lodgings developed. The emblem of the clubhouse has a goat and a thistle, the latter to celebrate the Scottish founders and the former to celebrate the importance of the goats when assessing the weather.  When the goats grazed around the clubhouse, it signified bad weather, when they moved to the outskirts of the greens it signified good weather.

Next section: Lahinch to Liscannor: 5km 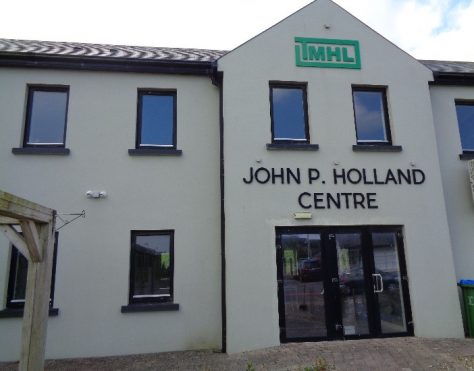 A small village with a pier where Moher flagstone was manufactured and sent abroad to make footpaths in several English cities. It was also used in housing construction locally and in roofing in particular.

John Philip Holland inventor, school teacher, musician and trainee Christian Brother was born in Liscannor on 24th of February 1841. He emigrated to America where he invented the first submarine known as the Holland 1. The Fenians gave him financial backing in the hopes that this could be used to attack British war vessels. The first submarine to be bought by the US navy was the Holland 6 and this design was also sold to the Japanese and UK navy. It is claimed that he based his designs for his submarines on the shape of porpoises he saw in Liscannor Bay as a child. 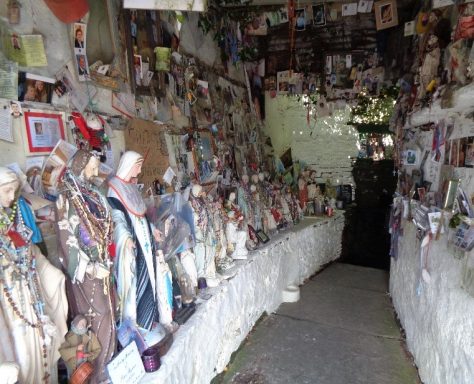 On February 1st each year, a mass is held at this well to celebrate the life of Saint Bridget. The local landlord Cornelius O Brien was ill in London in the 1830’s and claimed that he needed a glass of the water from this particular well in order to improve. The well water was brought to him and he made a remarkable recovery. He built this place of worship around the well to honour her. The statue of Saint Bridget is in the garden area, the well is lined with offerings and the graveyard is behind.

Next section: Saint Bridget’s Well to Cliffs of Moher: 3km 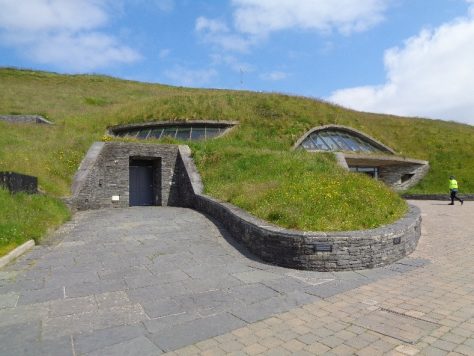 The Cliffs of Moher Visitor Centre

The landlord Cornelius O Brien recognised the potential of the cliffs at Moher as a tourist attraction in the early 1800s. Clare County Council opened the present day visitor centre in 2007. It has an innovative cave like style set into the site which cannot be seen from above. The structure is environmentally sensitive, uses geothermal heating, solar panels and grey water recycling. Local Liscannor stone is used throughout and the main entrance can only be seen when the visitor stands in front of it. It is wheelchair friendly and the dome like structure has a grass roof.

Next section: Cliffs of Moher to Doolin: 9km

This small village was home to the renowned musician, teacher, folklorist and storyteller Micho Russell. His mother played the concertina and his father sang sean nos. Micho learned the tin whistle at the age of eleven and was self-taught playing by ear. It is said that he had over 300 tunes in his head and “he always carried a tin whistle in his breast pocket”. He delighted audiences in America, England and the Continent. While returning home from a gig in Galway on March 25, 2015 he had a car accident and did not survive. His two brothers were also musicians and the Russell family are credited with bringing music to Doolin and are the reason why people still flock there for traditional music sessions.

Next section: Doolin to Lisdoonvarna: 7km 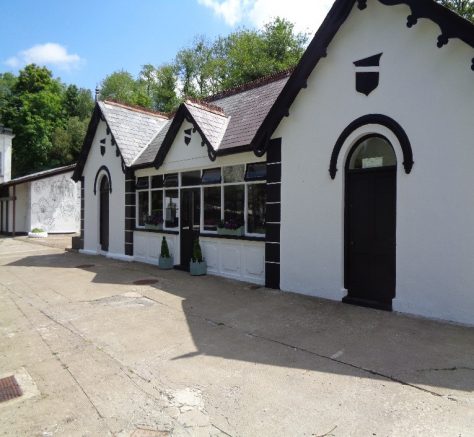 This town grew because of the popularity of the sulphur and iron in the curative water. The water originates in Slieve Elva, travels underground, reacts with the Clare Shales and becomes rich in both minerals.  People came here for a holiday and it was defined as an area “where parish priests pretend to be sober and bank clerks pretend to be drunk”. The first pumphouse was built in 1867. By 1895 it had over 20,000 visitors annually to the Victorian spa town.  The present day visitor to the Spa Wells Heritage Centre can see the electric shock therapy equipment, ancient massage equipment and other aids for various illnesses. ‘Biddy the Sulphur’ was a member of the Gutherie family and she gave out glasses of water from the pumphouse. She was an original entrepreneur and can be seen in many old photographs dispensing her elixir.

Next section: Lisdoonvarna to Kilfenora: 9km

Stop 9: Kilfenora – the City of the Crosses

A small village of just over 200 people on the gateway to the Burren. It was an important diocesan ecclesiastical centre in Medieval times and became known as the City of the Crosses, because it had seven High crosses.

The local Doorty family used the lower part of one of the high crosses as a grave slab and the upper part lay in the Cathedral on the ground. Both parts were reunited in the 1950’s and the famous cross is standing once more. It depicts a bishop with a crozier representing the Roman church while under him are two bishops representing the Coptic and Celtic churches.