“The school house as a heritage object is a common symbol of a shared past within both local communities and the wider population. Its was a shared space recognised and remembered by all within a community through multiple generations. It was a place full of memory & meaning for those who still live nearby and those who had left.” 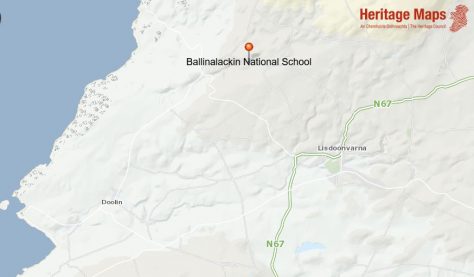 Location of Ballinalackin National School ‘Data from the [Insert dataset details] accessed through the Heritage Maps Viewer at www.heritagemaps.ie, 27-6-2021’.

The school is located on the borders of the townlands of Cloghaun and Ballinalackin, in the Civil Parish of Killilagh, in the Barony of Corcomroe, in the County of Clare.

The emergence of hedge schools in the 1700’s

In the old days there were no schools like today’s, but schoolmasters, down in their luck, travelling the roads. In places where proper schools were too far away, the local people set up a little shed and it was there that school was held throughout the year, and those near enough attended school there. Often the teacher’s dwelling was not very good, but that was all that he had. His custom was to go from house to house of a night in the home of each scholar here and there. These schoolteachers were men deprived of their livelihood with no other occupation but to wander the roads”

The Education Enquiry, of 1824 found that the parish of Killilagh had three hedge schools, all the pupils and the three teachers of these schools being Roman Catholic. (Kevin M Griffin et al, 2020).  The hedge school at Ballymackin (thought to be Ballinalackin) was described in the report as “a wretched hovel of the worst description.”  It was taught by Mr Henry Crean and there were 33 male pupils and 14 female pupils a total of student population of 47. 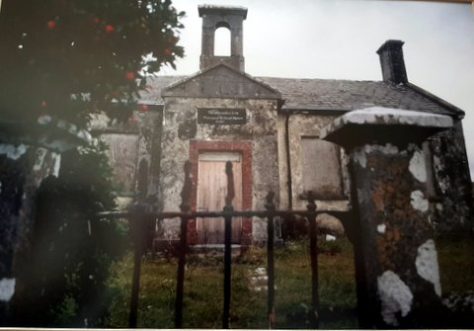 In 1831 following the Education Inquiry, Lord Stanley, the Chief Secretary of Ireland, established a system of National Education that would be available to all. It was not a popular development as people saw it as a further attempt to “anglicise” the language and religion of the Irish. The speaking of the Irish language was forbidden in the schools.

On June 13, 1839 the parish Priest of Killilagh, Fr Michael Kelly, made an application for the establishment of a school at Ballinalackin. The application was approved and construction commenced. The site was leased from John O’Brien, of Ballinalackin Castle, and the school opened its doors on February 22, 1841.

The building and fit out was completed for a cost of £277-10-0, the Education Board contributing £150 and the balance was raised through a community subscription.  The building consisted of two rooms measuring 50 feet x 20 feet. The dry toilets were in an outside building, turf dust being used to assist the composting of the waste.

The Population of surrounding townlands

The population of Ireland at this time was twice what it is nowadays. Literacy levels, particularly in rural areas, were low and living conditions very poor.

The children who attended Ballinalackin National School came from farming families. Situated in the limestone landscape of the Burren the children’s’ homes were constructed from stone with thatched roofs. The average number of children in a family was seven, living in small often two roomed cottages with parents and sometimes widowed relatives.

It was a Gaeltacht region and reviewing the census records (Census of Ireland 1901) all adults spoke both Irish and English. The population were all Roman Catholic.

Patrick Hayes was the first teacher employed with a salary of £18 per annum. He continued to teach at Ballinalackin National School until his death on 5th May 1847.

Not long after opening it was decided to create a separate girls’ school.  It is not clear if the girls were in the second classroom or there was a separate building constructed as there is no evidence on the site of another building. Mary Hayes was employed to teach the girls with a salary of £14.3.6 per annum. It is not known if she was the wife of Patrick Hayes or related in another way

Following the death of Mr Hayes there were quite a few short-lived replacement teachers until the arrival of Mr Patrick Davoren. Mr Davoren had qualifications in agriculture and set about creating a teaching farm. He rented an adjoining 7 acres of land at a cost of 5/- per acre, which he paid himself.  Agricultural classes were held from 1 – 3pm on a Saturday and 4 – 5.30pm on school days.

Instruction in agriculture was an attempt to overcome the impact of the famine by    educating the children in the most up to date farming practises and was wholeheartedly supported by the Board of Education. An inspection report by Patrick Fallon PP Nov 1851 re the agricultural studies of the pupils gave Mr Davoren a very favourable review. (Griffin, K M et al)

The school was established during the worst of the famine years and the community around it were severely affected by hunger. This is painfully illustrated in the following  story which was recorded by Margaret McMahon, related to her by her father, from The Schools Collection from Ballinalackin National School, 1937.

My father doesn’t know much about the Famine but he says that people ate parsnips, turnips and nettles. Two men were living in Cloghaun and one of them went out one day to eat nettles because of the hunger.  When he was returning home, he died of the hunger.  The other man was waiting for him and when he didn’t return he went out searching for him.

He found him dying in the middle of a field. He carried him home and he buried him in a grave in a field. There is a big stone over where he is buried.  A couple of months after that the other man died.  There was no one else in the house but a man came the way and found him. He dug a grave and buried him and closed the grave.  That time the people didn’t have much tea, sugar or flour.  Every day those who lived by the sea ate barnacles (barnachs) because they had no other food to eat.  Many people died on the roadside because of the hunger. ( The Schools’ Collection | dúchas.ie

School Life in the 20th Century 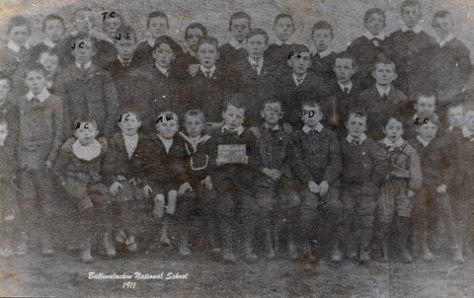 A school photograph, taken in 1911, shows boys well dressed and well nourished.  Ireland was enjoying some prosperity after the famine years and standards of living were slowly improving. The Aged Pension had been introduced in 1909. Population figures had dropped dramatically due to the famine and emigration.

Due to the efforts of the Gaelic League instruction in the Irish language began to be introduced in some primary schools. The stories of the children from Ballinalackin School recorded in the National Schools Collection (1937) are all written in Irish.

It was a period of political unrest and fear as the Irish fought for Home Rule. The Easter Uprising was 5 years away and WW1 commenced in 1914 when many young men left their rural homes to fight with the British Army. 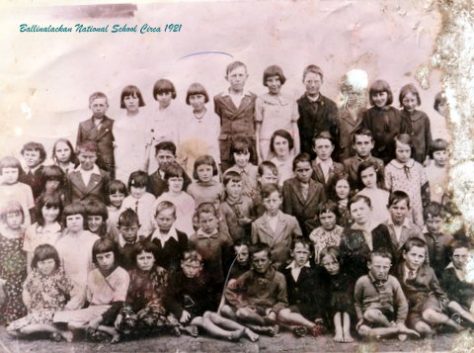 The school class room is now mixed sex, the children are bare foot, many are poorly dressed and some emaciated.

This was a period of deep political unrest and fear with the impact of the oppressive policing of the population by the Black & Tans & the RIC. The War of Independence was still impacting many areas of Ireland and locals that I interviewed recounted stories of IRA exploits in the townlands around the school at that time.

The Spanish Flu in Ireland was prevalent from July 1917 to March 1919. It particularly impacted young adults of child bearing age leaving many children orphaned. Tuberculosis was also rampant in the community and there was a social stigma attached to the disease as the common perception was that it was associated with poverty.  How many of the children in this photograph had been orphaned by pandemics and war?

In my conversations with former students, now in their 60’s, 70’s and 80’s they recounted stories of walking long distances to Ballinalackin School in bare feet on rocky roads and across fields in all weathers.

Student were required to bring a pail of water with them which they collected in a well located in the field behind the school. In winter there was a family roster to supply turf for the fires in the school.

Corporal punishment was frequently doled out and for almost all that I interviewed the abiding memories of their days at the Ballinalackin National School were the canings that they received.  They were only spared this punishment if their parents intervened and threatened the teachers if their children were subjected to this discipline. Their memories were not happy ones. 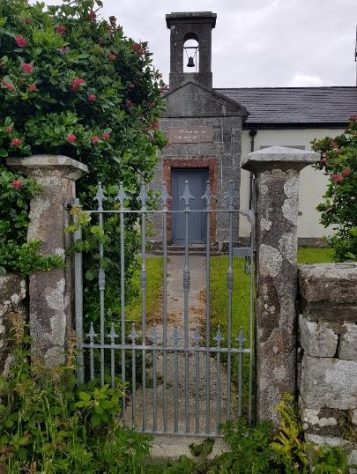 By the 1970s the population around Cloghaun had diminished due to emigration overseas and younger families moving away to cities in their search for work. Family size was smaller and the number of children in the townlands surrounding the school declined dramatically.

In 1979 the remaining pupils at Ballinalackin were relocated to St Edna’s, Lisdoonvarna, and the Ballinalackin National School’s doors closed. It stood abandoned for the next 29 years and fell into disrepair.

It was purchased in 2008, extensively renovated and extended. It is now a modern home with a large happy family of children.

McGrath, M, Larkin J C.C., (1944) History of the Parish of Lisdoonvarna (the original is lost, but a copy made by Sean Doherty October 1982)

O Dunilearga, S (1965) Notes on the Oral Tradition of Thomond, Journal of the Royal Society of Antiquaries of Ireland Vol 95: ½ papers in Honour of Liam Price 133-147 Ealaoire, Stiofáin Uì describes the Hedge Schools of Lillolagh

Hehir, John for the Irish translation of the children’s stories from Ballinalackin National School

McNamarra, Eilidh & Emmet, Cloghaun current owners of the Ballinalackin School for their memories and permission to take photographs