Medieval Church and Settlement of Noughaval 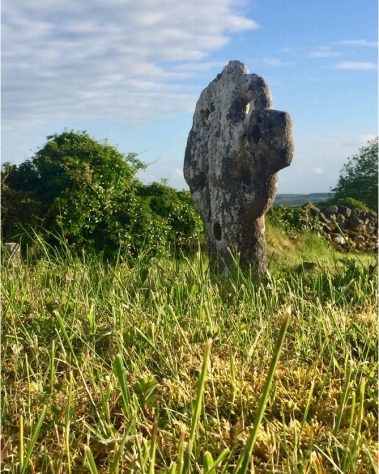 The ringed cross at Noughaval

When I enter the ancient Church and graveyard at Noughaval, I find it to be a place of rest and peacefulness.  You are surrounded by spirits…. good, not too good and golden silence, except for the whistling wind breathing in through the  limestone walls and around the gravestones. The birds overhead floating by, not a worry in the world.   It’s  a secret place to meditate and forget the past year, take charge of our destiny …….dare I mention ….. Covid……….

Map of Noughaval c. 1921 OS 6-inch map
Data from the basemaps gallery accessed through the Heritage
Maps Viewer at www.heritagemaps.ie

The parish of Noughaval is on the southern edge of the Burren lowlands, 3 miles from Kilfenora on the road to Ballyvaughan.   It is located close to the boundary between the limestone pavements of the Burren to the north/east and the sandstone shale region to the south and west.

As you get closer to Noughaval you will see a present day church and the ruins of a medieval church, surrounded by beautiful limestone walls.

The place name Noughaval is the anglicised form of the Gaelic name Nuachabhail (logainm.ie) and is generally considered as “new settlement, establishment or monastery”. 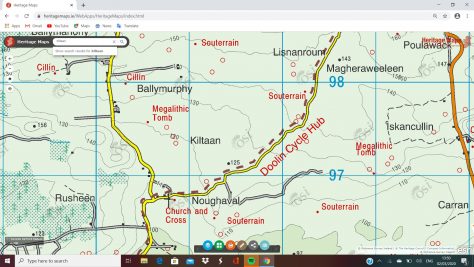 Map of Noughaval OSi Discovery MAP
Data from the basemaps gallery accessed through the Heritage
Maps Viewer at www.heritagemaps.ie 9-6-2021 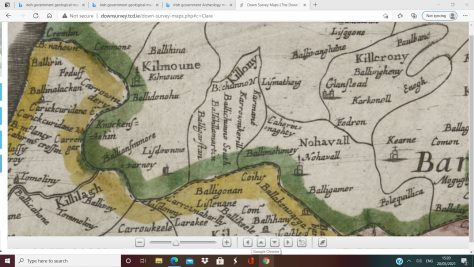 On the Down Survey Map of 1650 several townland names are recorded which still exist in the area today.  Also visible on the map is a building with a cross on top which marks the site of Noughaval Medieval Church.

The census of Ireland (1659), also known as Petty’s or Pender’s Pender’s Census, provides townland census returns of the inhabitants of most of the country.  The ‘Tituladoes’ or titleholders names shown for Noughaval are still common  in the parish today. 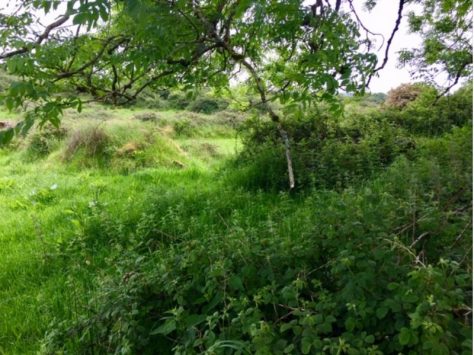 The ecclesiastical settlement at Noughaval is believed to have been founded by St. Mogua.  However, the date of foundation is unclear.  Traces of a circular wall which may have enclosed the site, a well dedicated to St. Mogua, located to the east of the church and an early style stone cross indicate an early pre-10th century date.

As you walk into the old graveyard, you will see the church ruin to your left, with heaps of fallen limestone, crumbling away over hundreds of years.  To the south, facing you is a beautiful view of big open countryside.  I think the light up here is so bright and you feel closer to the clouds and sky.   To the south west lies Kilfenora, Mount Callan to the south and to the east the impressive stone fort Cahercuttine.   I think now you realise you are in a special place. 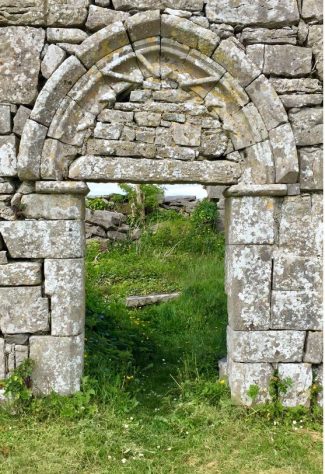 It took time and many hands to build this church.  Take a look at the large limestone blocks at the base of the south wall.  These date this part of the church back to around the 10th century when this large ‘cyclopean’ masonry style was in use.   No tractors or large machinery were available then to lift, handle or put them in place.  I can’t imagine the time and sweat and labour it took.

The stonemasons who built this beautiful church had location in mind.  It is built high up in the Burren with many views.  It was an advantage, as they could see approaching visitors or unwanted visitors from a distance. The location was on an important routeway between the inner Burren and the coast. 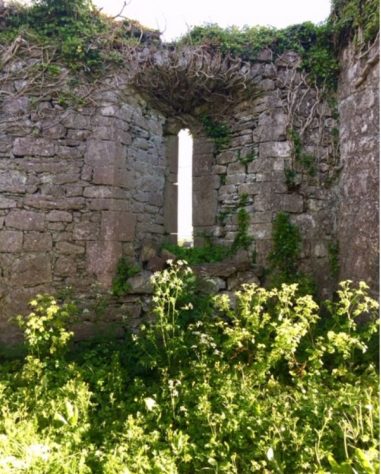 Round headed window in south wall 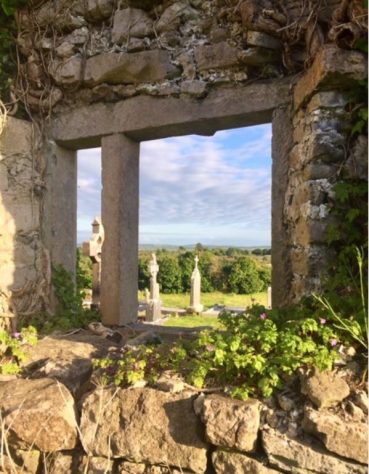 This church was extended in the late 12th – early 13th century.  The original doorway which was in the west wall was closed and one opened in the south wall. The south facing doorway is Romanesque style, with evidence of ‘School of the West’ influence in the rounded mouldings.  The arch has been blocked up in more recent times.

Inside the church ruin, there is plenty of overgrown flora, not much footfall here.  Over your head, no roof, just sky.   The gravestones and wall memorials date back to the 18th century.   I guess it must be a special place to have a grave within these sacred walls.

The north wall has no windows. There are two windows in the south wall set deeply into the thick walls.  One is rectangular with one surviving stone division, and the second is a round headed narrow window set in a wide splayed opening. 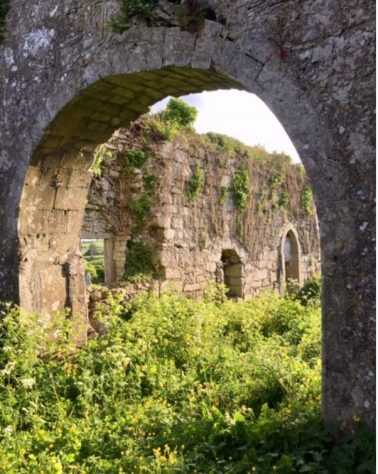 As you walk further in, you pass under a wide chancel arch into the chancel which was added in the 12th – 13th century. 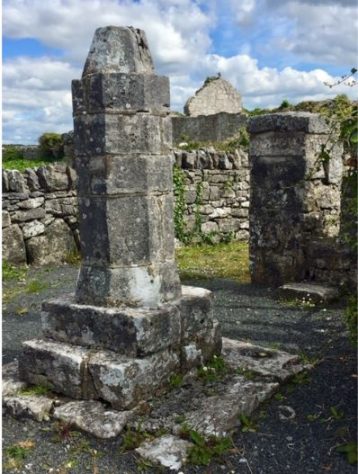 As you approach the gate into the graveyard there is a large stone cut monument, octagonal in shape.  It has been claimed that at some stage in time a cross was on top. This is a market stone on a limestone pedestal.   Noughaval is the only parish church in Ireland that is known to have had a medieval market at the heart of its settlement.  There is no surviving documentary evidence indicating when a market commenced at Noughaval or when it ended.

As I researched this project I spoke with local people who contributed with local folklore, about the market stone and its use.

According to local folklore, flax was grown and   milled in the area.  The flax was carded and brought to the bandle stone to be measured out and traded.  The stone also came in handy for people to tie the old donkey or pony,  while they went to mass.

Noughaval was a medieval market centre and it’s location in the O’Lochlainn territory suggests that ease of access was a factor in ensuring its long term success.  The market was the focal point in the parish and was well connected to the other places within the territory by a good network of routeways and tracks.

A Leacht or Stone Altar 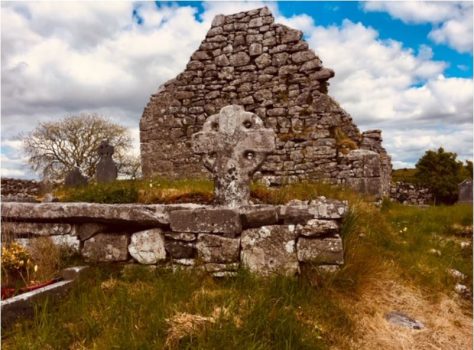 ‘Leachts’ or stone altars date back to the early Irish Christian times. They can be places of worship or burial.   The Leacht in the graveyard at Noughaval is rectangular in shape and flat on top.  It is surmounted by a very old ringed cross. 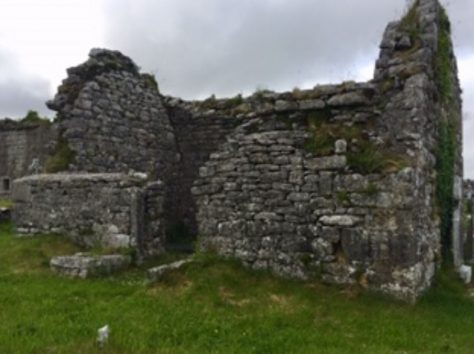 The O’Davoren Mortuary Chapel is found just east of the medieval church ruin close to the Leacht mound.  This vault-roofed limestone chapel dates back to the early eighteenth century.  It is the mortuary chapel of James O’Davoren.  Cahermacnaghten fort was the home of one of Ireland’s most famous medieval law schools, which was run by the O’Davoren family.

As you step inside to the right you will see a vault.  The vault has been cemented over for health and safety.

To the left is a flat slab which bears the inscription:

‘This chapel was built by James Davoren of Lisdoonvarna, who died 31st July 1725, aged 59 years’. 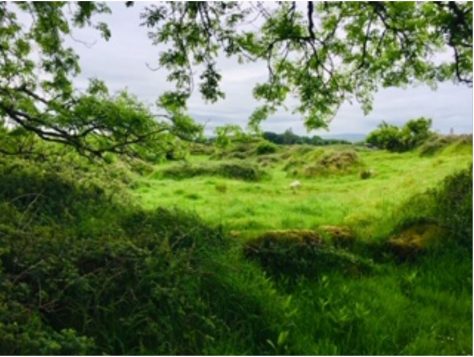 Outside the graveyard wall, you will make out the outline of small fields.  What you are looking at today is bushes, briars, nettles and moss covering the remains of little stone houses and other buildings.  These are the remains of a post medieval settlement at Noughaval.

In 1990 one of the houses was excavated by a research team headed by Sinead Ni Ghablain from the University of California, Los Angeles.  The houses seemed to have been built and lived in during the post medieval period, sometime in the seventeenth to nineteenth centuries.

The Parish Church in Noughaval Today

The present day Parish Church in Noughaval is named after St. Mogua. It was originally a Protestant Church located in Ballyvaughan. Around 1860, it was disassembled stone by stone and rebuilt in Noughaval.   It entered service in Noughaval in 1943. As with churches all over the country, numbers here have also dwindled and the future is uncertain.

All photographs are credited to the author

Frost, James 1893 ‘The History and Topography of the County of Clare’

Westropp T.J. 1900 ‘The Churches of County Clare – Barony of the Burren’

Chancel  The east end of the church

Nave       The main western portion of the church

common in the 12th century.

Cyclopean     A type of ancient masonry made with massive