A Tower of Strength - The Martello Towers of County Clare 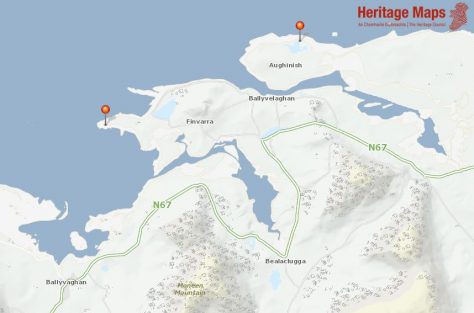 Location of the Martello Towers in County Clare. Data accessed through the Heritage Maps Viewer at www.heritagemaps.ie on 09/06/2021

There are two Martello Towers in Co. Clare, both in the Parish of New Quay in the north west of the County, one on Finavarra Point and the other on Aughinish Island.

Martello Towers are solid stone structures built between 1804 and 1816 by the authorities in Ireland and England as defence forts, because they feared an invasion by Napoleon Bonaparte and his French Army.

As England and France were at war in the early 19th century, the English feared that Ireland would also be attacked by the French. These fears were first realised in 1796 when the French landed in Bantry Bay in Co. Cork and then in 1798 when they landed near Killala in Co. Mayo.

Most towers were built along the coast, with the East coast having over 26 towers as Dublin was considered the most vulnerable site to attack. On the West coast as well as the two towers in Clare there is one tower in Rossaveal, Co. Galway. 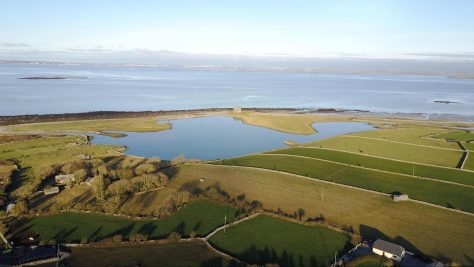 All three were started in 1810 to defend strategic points in Galway Bay (Bolton et al 2012). Up to 70 were planned and they were usually built in pairs so that the invading fleet would come under the cross-fire of two cannons (Enoch 1975).

As the Towers had cannons on the top section it was felt that they could open fire on any ships or invaders that were coming up the bay to attack. Fires could also be lit on the top as beacons to warn of approaching danger. Mirrors and Flagpoles on the roof allowed signals to be passed quickly up and down the coast (Bolton et al 2012).

Why are they called Martello Towers ? 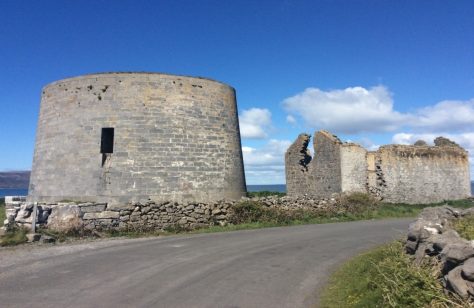 Martello Towers get their name from a tower on Mortello Point in Corsica. This tower withstood severe bombardment from British Navy ships, HMS Fortitude and HMS Juno in 1795. The English were helping the Royalist French  but they were unable to  take it  out of action while trying to capture Corsica which was under Napoleonic French rule. 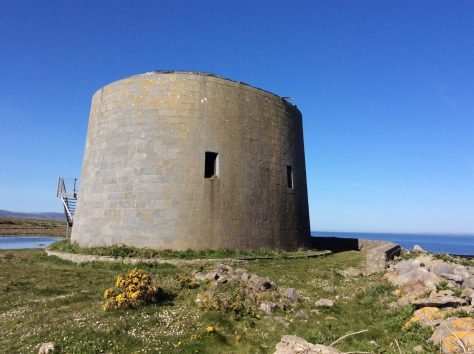 The original tower  in Corsica was built by the Genoese in 1656, who in earlier times ruled the area. The geographical  name of the headland where the tower stood was known as Myrtello Point as the headland was covered in the wildflower Myrtle.

So impressed were the British Navy at the strength of the Mortello tower that plans  were sent back to the Admiralty in London. It was suggested that similar towers would be beneficial in both Ireland and England to repel any Napoleonic attack. Unfortunately enroute  to London, the spelling or pronunciation  got changed from Mortello/ Myrtello  to Martello and remains so to this day. 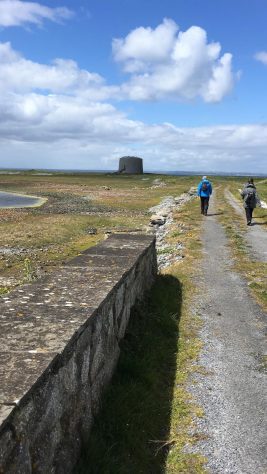 It is separated by sea from its own Parish of New Quay and the rest of Co. Clare, while being joined by road to Geeha in Co. Galway.

It was originally connected to the extreme north west of Co. Clare. In 1755 following an earthquake off Lisbon, Portugal, which measured nine on the Richter scale and lasted seven minutes, the subsequent tsunami effect reached the west coast of Ireland separating Aughinish from New Quay.

For about 50 years Aughinish remained an unattached island. In the early 1800’s the English War Department purchased six acres on the Island from Major Lynch of nearby Newtownlynch for £40 (Glynn 2002).  In 1810, they built an eight Km roadway along the strand connecting the island to Geeha in Co. Galway to facilitate the transport of materials and supplies for the construction of the Martello Tower (Glynn 2002).  The road is still in use today. 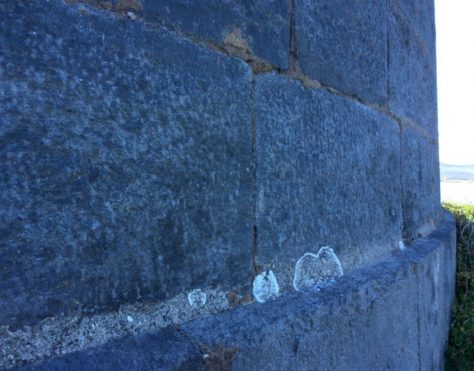 Base of Finavarra Tower with cut stone and mortar

All Martello Towers are built with slabs of cut granite stone or limestone held in place with mortar.  This mortar was very strong and anecdotally said to be made up of ground granite, lime, ash, hot wax and ox blood (Enoch 1975). 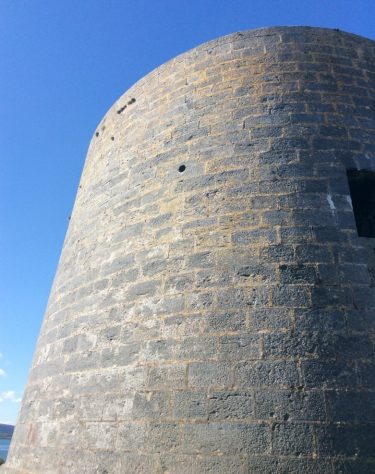 The towers were constructed using ashlar masonry where the stones were cut in rectangular blocks of different lengths laid in parallel courses with narrow joints. It was impossible to climb due to the smooth surface (Bolton et al 2012).

In both County Clare towers there are 27 rows of cut stone slabs from foundation to summit.

Around the base of Aughinish Tower there is a wider circle of 66 slabs of cut stone (Glynn 2002).  Stone for Aughinish was quarried locally near the cliffs.Stone for Finavarra was delivered in advance possibly from a local quarry and cost £1,800 (Balfe 2006).

The cost per tower today (2021) after allowing for inflation and converting Sterling to Euros would amount to approximately  €215,000.00 (Bank of England Inflation Convertor)

The Martello Towers of Co. Clare are ovoid shaped and have very strong walls up to eight feet in thickness. According to Enoch (1975) the height of each Clare tower is 40 feet and is approximatley 45 feet long at the widest part of the oval and  30 feet at the narrowest end, which always faced the sea. The  windows face seawards also. 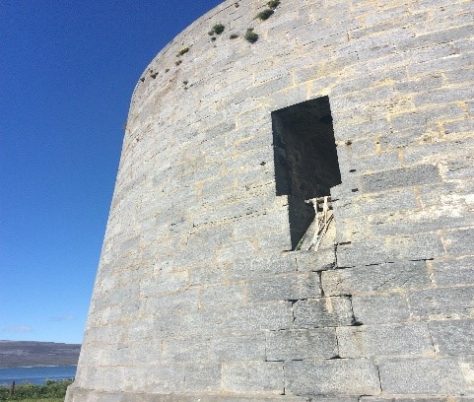 The entrance doors are 10 feet up from the ground with a lower sloped section and an iron bar to faciliate taking in supplies. Ladders were used to reach the door and hauled up afterwards to keep unwanted visitors out.

Doors were always on the landward side so that they could not be fired upon by enemy ships.

In Finavarra, the remains of a rope can be seen attached to the iron bar which people used to get into the tower. 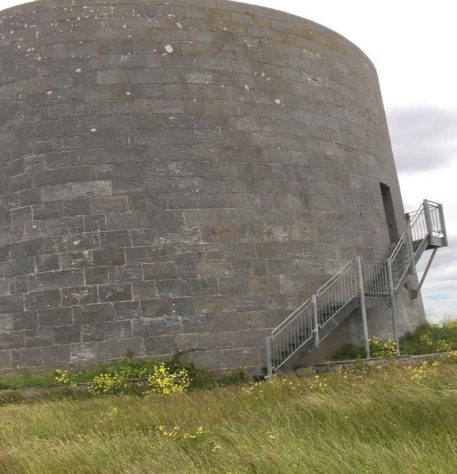 On Aughinish,  where the tower is  privately owned,  the current owner has put a metal stairs up to the doorway.

Ireland’s Towers were looked after by a section of the Military called the Board of Ordnance. They trained the Royal Engineers who were to build the Towers and commanded the Royal Artillery who manned them when built.

All towers had three levels. They were entered by the one doorway into a small passageway that led into the main living area on the middle floor.  This passageway in Aughinish Tower is six feet wide approximately, the width of the wall at this point. 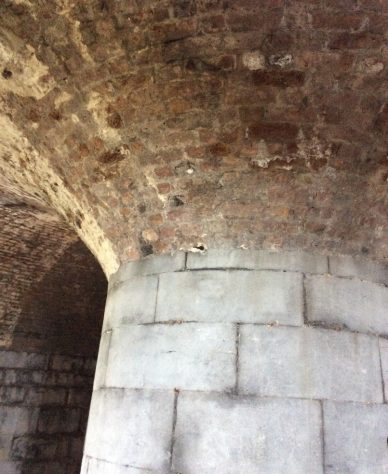 The middle floor was the living quarters and contained bunks for the artillerymen and Officers on duty. Up to 16 people lived there so it was very cramped (Bolton et al 2012).

The floor was timber and the ceiling was vaulted to carry the weight of the cannon above.

Red bricks were sometimes used in the ceiling design and can be seen in Aughinish.

There are four small windows set into the wall facing seaward measuring approx. five feet high by two and a half feet wide and 15 feet up from the ground. 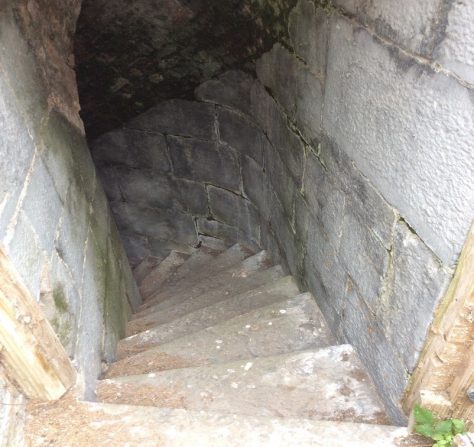 The ground floor had a kitchen and storage for provisions, ammunition (gun powder and cannon balls) and water tanks. Each tank held 465 gallons in the event of a siege (Enoch 1975). Rain water was collected on the roof and passed down to the tanks via pipes in the walls. All towers had drainage holes to the outside. It had a clay floor and walls lined with timber. The door, locks and hinges were made of copper. Wooden pegs were used instead of iron nails. This was to prevent any sparks from a soldier’s nailed boot hitting off the stone floor or metal item causing an explosion (Enoch 1975). 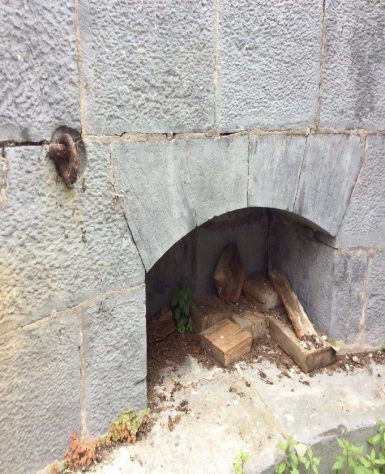 The top floor contained the cannon and furnace. The flat roof of the tower is supported by a very strong central column from the base of the tower (Balfe 2006)

There was a trap door to pass requirements up to each floor and avoid carrying heavy items up the spiral stairs (Bolton et al 2012). 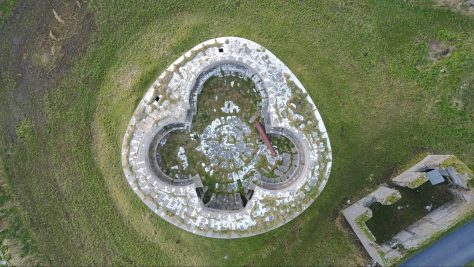 On top of the Tower was a parapet and a central pivot on which rested a heavy timber beam which supported a cannon known as a “24 pounder”. The beam had wheels at the other end which rested on a circular runner set into the stone roof. This enabled the cannon to move and fire in the required direction. Range was approximately two kms. Finavarra Tower had three cannons on top. 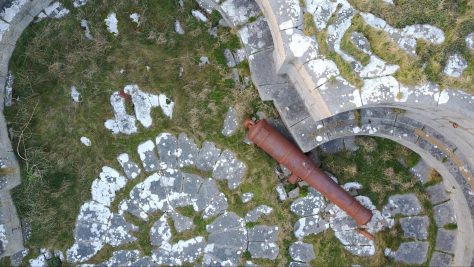 There were three openings in the parapet on the roof, namely, the entrance to the spiral stone stairs to access areas below, the opening over the door entrance to fire down upon attackers and an area for a shot furnace.

The furnace was used to heat cannon balls and iron shot. Cannon balls took 25 minutes to get white-hot but iron shot needed less as it was smaller (Bolton et al 20120). 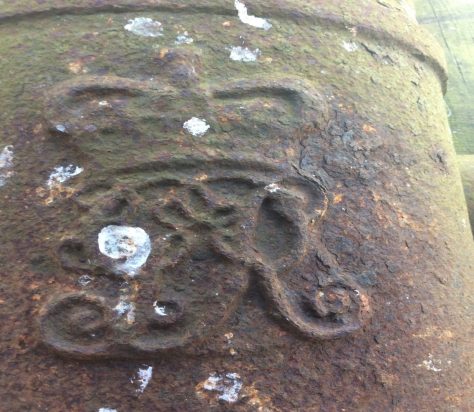 Hot shot was a devastating weapon against timber sailing ships as it caused both impact damage and also set fire to the ship and its sails.

Nine men were needed to  load and fire the 24 pounder with extra artillerymen assigned as it  was expected to lose up to half a gun crew due to either enemy fire or accidental explosions in battle (Bolton et al 2012).

Extra men were housed in nearby guardhouses  and in  peace times their families lived there with them. 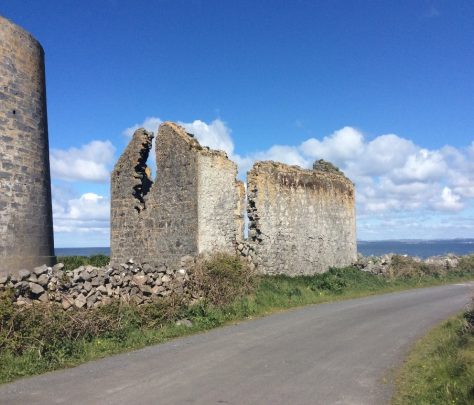 Ruin of Guardhouse at Finavarra Tower

Finavarra  Tower has a nearby guardhouse but not Aughinish. 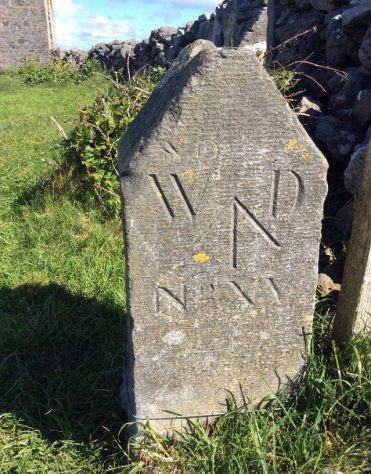 Surrounding each tower there are square stone markers, these are engraved with an arrow head and the letters “W. D”. for War Department. These mark the retreat positions to be taken by the garrison in the event of an attack (Balfe 2006).

There are also some marked “B. O.”  for Board of Ordnance which mark the boundary of the  Military land. It normally included the foreshore. Some of the B.O markers were later replaced by W. D. ones and had a number on then as well as the arrow head (Barton et al. 2012).

As the range of the cannons on both Finavarra Tower and Aughinish Tower was 2kms approximately, any invading French ships coming up Galway Bay to attack may not have been in any danger from the gunfire.

As Napoleon Bonaparte did not invade Ireland or the west coast, no shot was ever fired in battle from the cannons on the Towers. 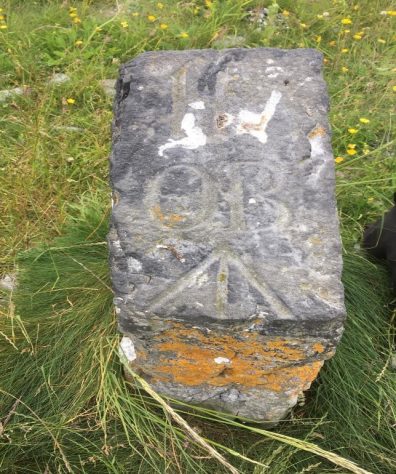 Both towers are still standing today, June 2021, over 200 years after being built.  Finavarra is in good condition outwardly with one cannon lying on its roof. The ruin of the guardhouse has cracks in each of the four walls.

Aughinish Tower is privately owned and appears in good condition outwardly and while some renovation work has been done indoors it is uninhabitable at the moment.  The only residents in both towers currently are birds and wildlife!

Martello Towers are now part of our historical heritage and while they exist today either with a different use or left to the elements they are a reminder of a long forgotten past when the threat of imminent invasion was just over the horizon.

The Towers were formidable installations and while not needed to repel any attack after being built, they also served to hinder the approach of ships, provide communication along the coastline and to provide a strong fort to withstand bombardment and siege until reinforcements could arrive (Bolton et al 2012).

Truly, each Martello Tower is a Tower of Strength!

All Photographs are by the author, Marian Connolly except where credited to Craig Hill.

Photographs of the interior and roof of Aughinish Tower taken with permission of Mr Jonathon Killeen, whose family own the tower.

Thanks especially to Zena Hoctor, who delivered our Reading your Local Landscape course and opened my eyes to all the Heritage features that are in my local community and made me want to discover more about them. The course was supported by Limerick and Clare Education and Training Board and co funded by the Co. Clare Creative Ireland Strategy

Thanks to our guest tutors for their contribution and input and to my fellow course participants.

Balfe, Michael. A Burren Village, A Brief History of New Quay and its Environs.