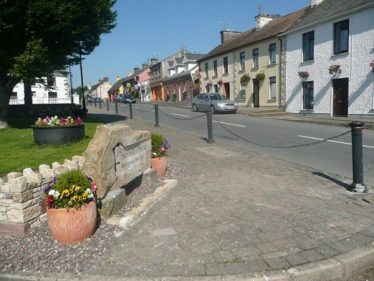 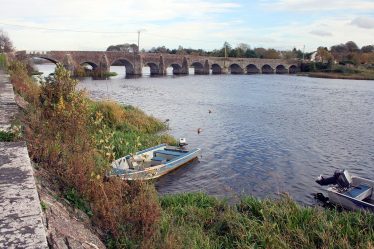 zoom
View of bridge in the village
Joe McArthur 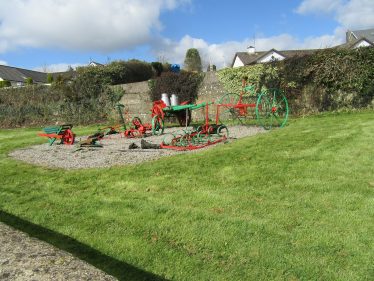 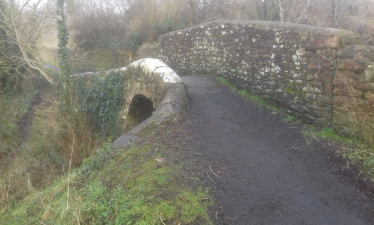 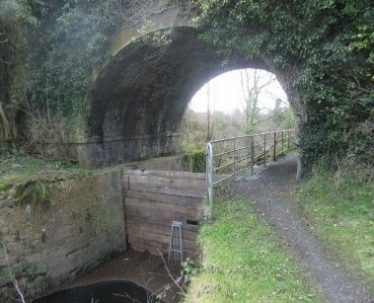 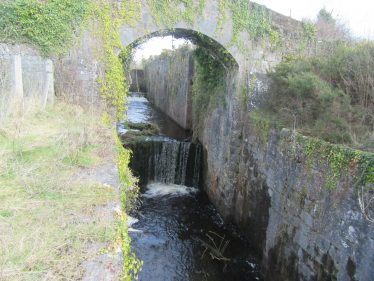 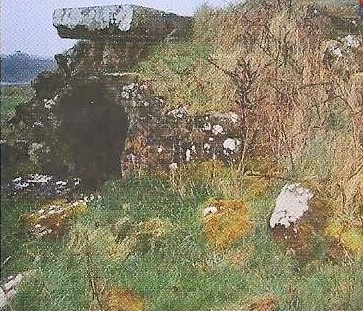 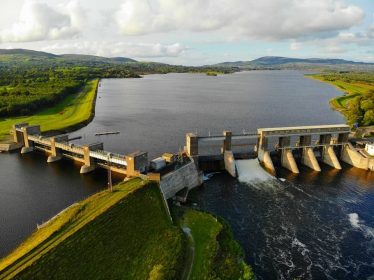 O’Briensbridge is a small village located in east Clare, on the banks of the river Shannon. The old name for O’Briensbridge was Áth Coille Gallaigh – ‘’The Rough Ford of the Wood’’. The following describes some of the wonderful heritage features to be found in this area.

The first record of a bridge here was in the year 1071 AD.  It was built with timber as a walkway across from Limerick to Clare.

Turlough O’Brien, Lord of Thomond, built a bridge here in 1506 which was named after him.[1] Gradually the village became known as O’Briensbridge.

The present bridge originally had 14 arches. It was built by the Browns of Clonboy, Bridgetown in the 18th century.  In the 1840’s this bridge was reduced to 12 arches to allow barge vessels and steamboats to pass up and down the river. The village became a thriving centre with the boat traffic which ran from Limerick to Dublin carrying passengers and freight.

Next to the bridge is a Heritage Garden. It is dedicated to Nan Hogan, who was a leading member of Cumann na mBan. She died in 1924, after being on hunger strike.

In the garden there are various types of farm machinery from years gone by, including a mowing machine and a plough.

If you walk along the public footpaths by the banks of the River Shannon to the south of the village, you will pass over seven beautiful humpback bridges. These were built with sandstone by the canal company in the 1800’s. Each of these has a low wall on the “river” side and a higher wall on the “land” side. The tow horses pulling the barges along the Shannon walked over the bridge, with the lower wall facing the river allowing the tow rope to pass along the top of the wall. The higher wall, on the land side, prevented the horses from falling off the bridge. The purpose of the bridges was to allow livestock access to the river.

If you continue to walk south along the trail, you will see some natural woodland.  It is very realxing to walk in this area with the river quietly flowing on your left.  The path then follows the Errina Canal which branches off the River Shannon.  After a short distance you will reach Errina Bridge.  This is a beautiful stone bridge.  Years ago barges passed through with cargo and passengers on their way to and from Dublin.  Further down you will see a triple lock, said to be the only triple lock in Ireland.

If you choose to walk in a northerly direction from O’Briensbrige along the bank of the Shannon, a short distance from the village, an island is visible on the river. This is Inishlosky, also known as ‘Burnt Island’.  In the past, farmers would bring the stubble left over after the harvest and  ‘the thrashing’ to this island to burn it and hence the local name.

On the island, you can see the ruins of a Romanesque church built sometime in the 12th century and surrounding it, a disused graveyard. The graveyard contains two burial vaults and four inscribed gravestones. The oldest gravestone records the burial of Richard Nash in 1723.  People were still being buried in this graveyard up until the 20th century.

In 1925 the ESB built  Parteen Weir Hydro Dam, upstream from  O’Briensbridge, as part of the Shannon Hydroelectric Scheme The weir was built to control the flow of water from Lough Derg into the Shannon Scheme via the headrace. Most of the fall of the river Shannon is concentrated in the short distance between Lough Derg and Limerick. The fall powers the turbines at Ardnacrusha Power Station. The Hydro Dam holds up the water level through Killaloe and Lough Derg. It allows 10 cubic meters of water per second down the River Shannon, while the next 400 cubic metres per second are sent down the Headrace Canal to the power station.[2]

There are lovely walks in the area which allows you a view of all these heritage features.  Two of these – the Errina Bridge Loop and the Parteen Weir Loop are interlinked, so you can choose the shorter one if you wish.  The Errina Bridge Loop travels south along the Shannon, while the Parteen Weir Loop takes you north from O’Briensbridge. Inexperienced walkers will find them easy, as it is flat all the way. The trailhead for both walks is the car park beside the bridge in O’Briensbridge.

The Errina Bridge Loop Walk  is 7 km in distance and takes roughly 2 to 3 hours to complete.  It’s an easy walk as it is flat, with lovely views.

The Parteen Weir Loop  is 5 km in distance.  This walk can be up to an hour long depending on how fast or slow you want to go.