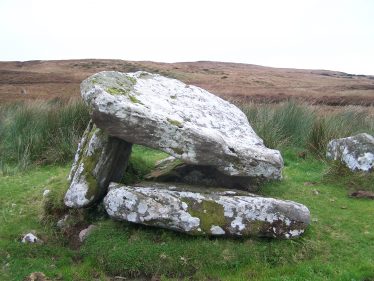 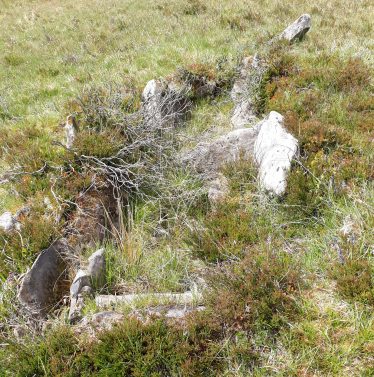 Located in the townland of Bohateh North, about 3.5 kilometres north of the village of Mountshannon, in East Clare, to the north of road number 4032, is an ancient monument. It is known locally as ‘the Dolmen’ but is classified by archaeologists as a Wedge-shaped Gallery Tomb.
The burial tomb stands on raised ground on the lower slopes of the Slieve Aughty Mountains. It is situated about 50 metres from the bog road. The heather-covered blanket bogland that surrounds the tomb provides rough grazing for cattle and horses.

Why is it called a Wedge Tomb?

A wedge tomb is a place where people were buried in pre-Christian times and its name relates to its shape. The front-end of these tombs are generally broader and higher than the back-end, which narrow into a wedge shape. A large capstone or a number of stone slabs usually form the roof and rest on other stone slabs forming the side and end walls. The front of the tomb usually faces in a westerly direction, towards the setting sun. The burials were placed in the rear of the internal space which is often referred to as a gallery by archaeologists.
The tomb at Bohatch is approximately 3 metres long externally with a width of 1.5 metres. The capstone is supported on two front stones and the side stones have collapsed. The tomb sits on a low mound.

How old is it?

These types of tombs were in use between the late Neolithic and Early Bronze Age in Ireland and date to between 2,500 and 2,000 BC. We cannot put an exact date on this tomb at Bohatch without excavation.

Other monuments in this area

There are a number of other recorded archaeological monuments in the immediate area around the Bohatch wedge tomb. These include a standing stone, two cist graves and an enclosure. It is likely that these monuments, with the exception of the enclosure, date to roughly the same period as the wedge tomb. This all indicates that this area was an important burial place between 4,500 to 4,000 years ago.

The site commands an extensive view across Lough Derg to the Arra Mountains. Herds of wild deer can sometimes be seen on the slopes of the Slieve Aughty Mountains.