You are here: HomenextPlacesnextReading Your Local LandscapenextScariff: Our Local landscapenextA Tour of Historic Buildings in Tulla, County Clare

A Tour of Historic Buildings in Tulla, County Clare

St Mochulla (or Mochuille) founded a monastery in Tulla circa 620AD and the village grew up around that monastery. The placename derives from “Tulach na nEaspoc” meaning the hill of the bishops or ‘Tulach na nAspal’ the hill of the Apostles. The anglicisation of ‘Tulach’ is ‘Tulla’.

Samuel Lewis in his ‘A Topographical Dictionary of Ireland’ 1837, describes Tulla as follows:

The town is pleasantly situated on a hill and is surrounded with highly interesting scenery, enlivened with numerous elegant seats and pleasing villas. The principle trade is derived from its situation on a public thoroughfare and is chiefly confined to the supply of the surrounding neighbourhood.

Today it is a small, busy town, the commercial centre for the surrounding district with a strong community spirit. It has a great tradition of music and is home to the renowned St Patrick’s Pipe band and the award winning Céilí bands. 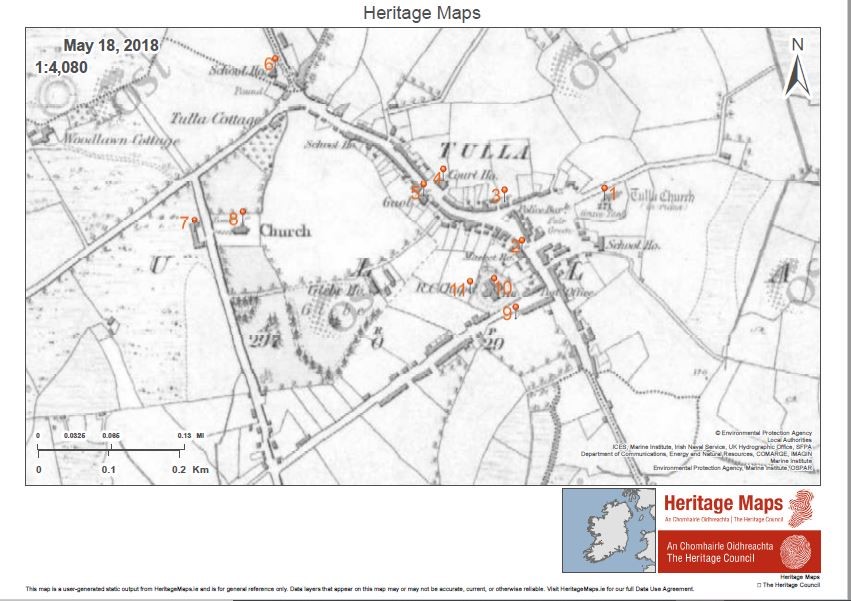 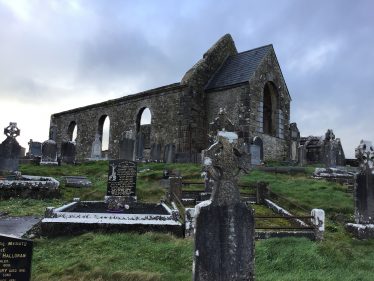 Few remains of that foundation can be seen today, with the exception of the enclosing earthen bank. The famous antiquarian Thomas J. Westropp, recorded that an older church, dedicated to The Twelve Apostles, was located to the north of the present-day church ruin.

The remains of the stone church that is visible today, was built in the early 1700s as a Church of Ireland.  By 1812 it was no longer in use, as a new Church was built to accommodate the congregation (Stop no. 8).

By 2006 the ruin was in danger of collapse. A local group, with the help of a Heritage Council grant, conserved the structure.

A number of commemorative monuments to the local landed gentry, e.g. the O’Callaghan, Hartes and McMahons families, are located in and around the church. The surrounding graveyard is in use today as the parish graveyard. The headstones have all been photographed, recorded and transcribed as part of the Historic Graves project. https://historicgraves.com/tulla/cl-tula-0233 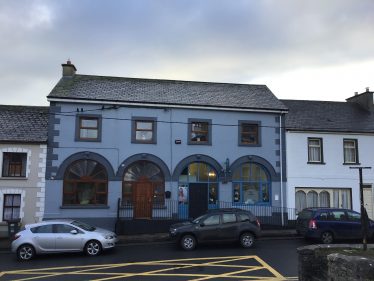 This two storey, cut–stone building dates from circa 1800. The ground floor was used as a market house while the first floor served as a meeting room and court room. Its use as a market house ceased when a new market house was constructed in 1843 (now in use as the Library Stop 3). It later served as a Royal Irish Constabulary barracks up to the formation of the new Irish State. It was acquired as a private residence in the mid-1920s. Since then it has been used by various businesses.  Today it houses a beauty and hair salon. 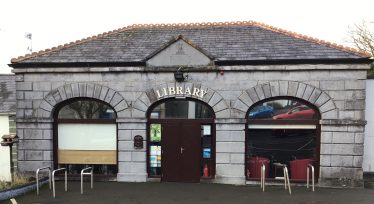 This single storey, cut-stone building was constructed in 1843 as a market house by the Brady – Browne family of Newgrove, Tulla. These prominent Protestant landlords were responsible for many buildings in the village. Their family coat of arms is over the central bay of the building. It continued to be used as a market house up to the mid-20th Century after which it fell into disrepair. In 1990 it was renovated and is presently in use as the local branch of Clare County Library, which is open to the public on four days a week and is one of the local resources for historical research in the parish. 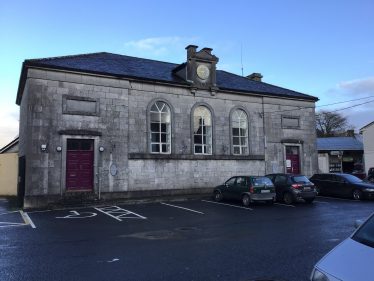 The Courthouse was built in 1838 by the Brady – Browne family who owned much of the village of Tulla up until the 1930’s. It was used as a Courthouse from that time until 2008. In 2005, the Tulla Courthouse and Community Development Co. Ltd. (a registered charity) was formed to oversee the renovation and extension of the Courthouse through a Department of Sport & Tourism grant. Today the building is used for community purposes to include club meetings, music concerts, drama, heritage events and other social occasions. 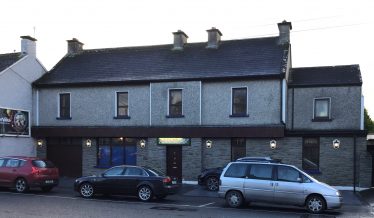 Located directly across the main street from the Courthouse, this building is now a bar and lounge. It was originally used as a holding station for prisoners awaiting trial in the courthouse and for prisoners waiting transfer after sentence, in the 19th century. The only surviving features of the original bridewell building are an exposed portion of a cut stone wall and window internally. 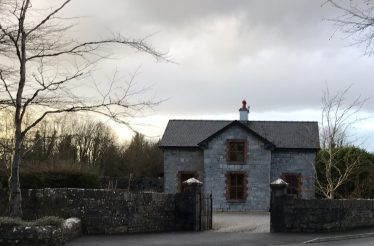 This building was constructed by the Molony family of Kiltannon as a private dwelling in the early 1800s.  Circa 1830, the family gave it to the Protestant Church Education Society. By 1842, 87 boys and girls were in attendance. However, the Society had discernible proselytising intentions, promising employment to Catholic pupils if they converted to Protestantism.

Local belief was that the sole purpose of the school was to convert Catholics and that wealthy Protestants were educated elsewhere.

During the famine a soup kitchen opened in the school. Between 1845 and1847, the attendance at the “Souper School” more than doubled and the children were known as “Soupers”.  By the end of the great famine attendances dropped. In 1851 the school closed and Rev William Brew, who managed the school died. It re-opened from 1854/55 to the late 1870s with a Protestant attendance. 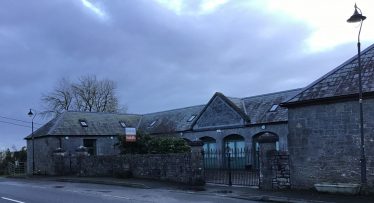 Built circa 1820, these stables were used to house the carriages and horses of the local landed gentry while attending services in the Church of Ireland, located across the road. The stables are a six bay single storey structure. They fell into disrepair and were extensively renovated for use as a Community Arts Centre in 2005. Today it houses individual artist studios. 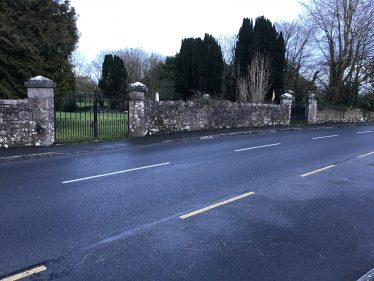 The Church of Ireland graveyard is located directly across the road from the stables. A church, built in 1812 once stood within this graveyard, but was demolished in the early 1960s. The graveyard contains headstones dating from the 1820s to 1969, several mausoleums and an obelisk. The original iron gates, iron railings and walls still enclose the area. Interestingly two sets of double gates provided an entry and an exit matching the opposite gates of the stable block.

The headstones within the graveyard have been photographed, recorded and transcribed as part the Historic Graves project and can be viewed on https://historicgraves.com/tulla/cl-tula-0233 The memorial tablets that originally hung in the church, were removed at the time of demolition but were returned in recent years and are now displayed in the graveyard commemorating the families that once worshipped here. 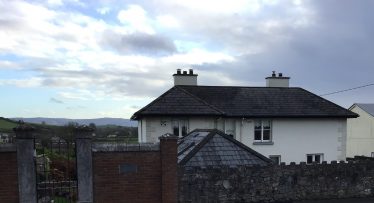 A plaque in the surrounding front wall of this cut-stone two storey dwelling is inscribed “Tulla House c1812”. The house is situated directly across the street from the Catholic church. (Fig 10).  Built by the Brady-Browne family, it was the home of the Catholic clergy up to the 1980s when it was sold by the Diocese of Killaloe. It is now a private residence. 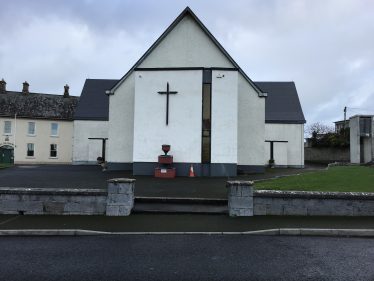 A number of mass houses existed in the parish of Tulla in the 18th century but their exact location is uncertain. In the 1830s, the Brady-Browne family donated this site for the building of a Roman Catholic Church to the Rev, Fr Charles Fahy. The present-day church commenced in 1832 and was completed in 1837, when Rev Fr Patrick Sheehy was the parish priest.

Renovations in 1971, included replacement of the roof, addition of porches removal of two galleries and redesigning of the sanctuary area. External changes included the removal of the entrance gate, pillars and iron railings on the street front.  In March 1972 the church was dedicated to Saints Peter and Paul. The roof has again been replaced in 2017. 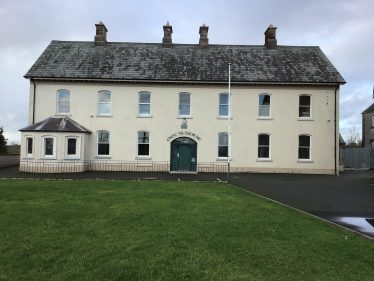 The Sisters of Mercy were invited to Tulla in 1883 by the Bishop of Killaloe to provide education for young girls. The two storey building situated adjacent to and slightly to the rear of the Catholic Church became their convent. In Oct 2011 the Mercy Order donated the convent and former primary school buildings to Ceoltas Ceoltóirí Éireann.

Known today as Cnoc na Gaoithe, this building houses a rich archive of the traditional music and folklore of East Clare, as well as a photo archive of historical interest. The upper floor of the building has been recently renovated to provide accommodation for visiting students and artists. It is planned to provide a performing arts theatre and a tranquility garden at a later stage.