You are here: HomenextPlacesnextReading Your Local LandscapenextThe Townland of Cragbrien - Reading its History through the Landscape

The Townland of Cragbrien - Reading its History through the Landscape 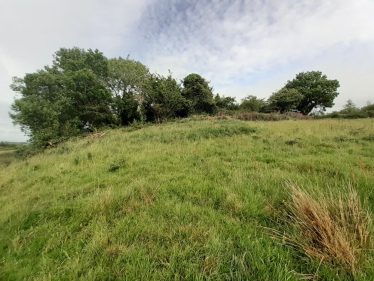 Cragbrien, a County Clare townland of 562 acres lies to the West of Ennis, near the Shannon estuary, between the main Ennis to Kilrush and Ennis to Kildysart roads.
Cragbrien is in the Electoral Division of Lisheen, in the Civil Parish of Clondagad, and in the Barony of Islands.
The Irish name for Cragbrien is Craig Bhriain or Brian’s Rock.

This short study begins in the Bronze Age where we will briefly examine the remains of ancient cooking sites or “Fulachta Fia” found in the east of the townland.
We will move then to the Early Medieval period and from this period look at the overgrown remains of what is still an identifiable Rath or Ringfort in the north of the townland.
Moving on from the Early Medieval period to the Late Medieval period we look at the historical references to Cragbrien Castle and its place in folk memory.
We come then to the 18th Century landscaped estate of Cragbrien House which is described as  ‘the lovely seat of Mr Stackpoole” (Wilson, 1786) and as we shall see was most probably built from the stones of the castle. 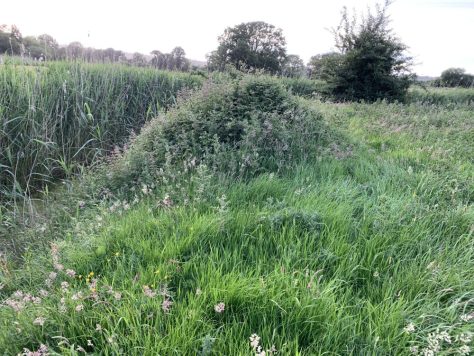 The archaeology of Cragbrien reveals evidence of habitation stretching back to the Bronze Age in the form of four Burnt Mounds or Fulachta Fia.
A Fulacht Fia (Fiadh) means– ‘cooking place of the deer’ or ‘Fianna’. They appear today as horseshoe shaped grass covered mounds or ploughed out horseshoe shaped areas of burnt stone and charcoal and are usually sited near a stream or other source of water. The Fulachta Fia or Burnt Mounds in Cragbrien are situated near a stream. Although four fulachta fia are marked on the Ordnance Survey 6-inch historic maps it was only possible to identify two of them on the ground today.

The only remains of Early Medieval settlement in Cragbrien is a Rath of Ringfort.

Ringforts are the most common archaeological monuments on the Irish landscape and are known by a variety of names, including fort, rath, dún, lios, cashel and caher. They consist of an area, usually circular, enclosed by one or more earthen banks (in the case of Raths) or by stone walls (in the case of Cashels). They generally vary in size between 25 and 50 meters in diameter and were constructed as protected enclosures around farmsteads, mainly during the Early Medieval Period (c.500-1100 AD). 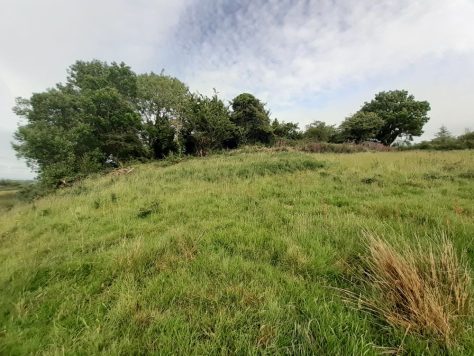 The Rath in Cragbrien is overgrown but identifiable as a univallate (one bank) structure and is situated on the side of a hill in the northern section of the townland.

Interestingly the farmer on whose land the Rath is located mentioned that he had never gone near it and would be afraid to do so! The Ringforts give us more than just archaeological evidence of early habitation they also provide a story of their own in the form of superstitions and fairy lore. This is a possible reason as to why there are, to this day so many of these structures lying untouched in fields all around the countryside.

In a report which was extracted from The Castles and Tower Houses of Clare compiled by Risteard ua Cróinín and Martin Breen (2014) the history of the castle is described as “uneventful like many other castles not owned by the main landed families of the county.”

According to this report all that remains of the castle today are “some typical 15th century corbels supporting the rafters of some of the out offices in the farmyard of Cragbrien House. This farmyard may stand on the castle bawn as the North east corner of the yard is round. The well outside the yard to the North West is known as the castle well.”

We also learn a possible origin for the name Cragbrien in this report. Early references to the castle link it to the family of Mac Gylereugh, with many variations of that spelling and now anglicised to Gallery and Mac Gilreevy. In 1562 Richard Mac Gilla Riabhaigh died. It was said that he was the best servant of trust of the Earl of Thomond, (Conor O Brien 3rd Earl). Hugh Weir notes in his account of Cragbrien House that the old castle of Cragbrien stood to the north of Cragbrien house and that the name Cragbrien comes from Brian Gallery, head of the original family who occupied the castle.

We learn from Ua Cróinín and Breen’s report that there is no mention of Cragbrien castle after 1704 and the report suggests that by 1777 Cragbrien castle was already a ruin. John O Donovan writing in 1839 (OS Letters) states that ‘not one stone remains on top of the other’.

The memory of the castle’s existence remained alive in local folk memory as is evident from this extract from the Schools Manuscripts Collection of 1937.

About 1712, Henry, 8th Earl of Thomond, made a lease forever of Cragbrien to John Stacpoole at a yearly rent of 70 pounds 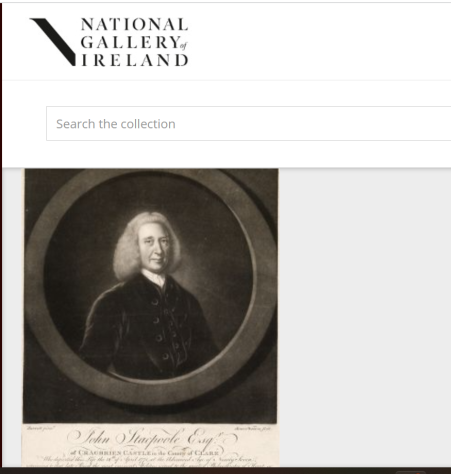 The engraver John Watson c1740 -1790 has a very lengthy and complimentary inscription to John Stacpoole, philanthropist and landowner of Cragbrien castle. Given that the castle was in ruins by 1777 it is probable that John Stacpoole who died in 1771 aged 97, lived in Cragbrien House, a landscaped estate likely built with the stones from Cragbrien castle. (Ua Cróinín and Breen 2014)

The Stacpoole name continues to be associated with Cragbrien. In the NUI Galway website ‘Ireland’s landed estates and historic houses c1700 to 1914 ‘ Cragbrien house is described as an 18th Century house referred to as the “lovely seat of Mr Stacpoole” by Wilson in 1786.The house passed to the Stacpoole Mahons in the 19th Century. 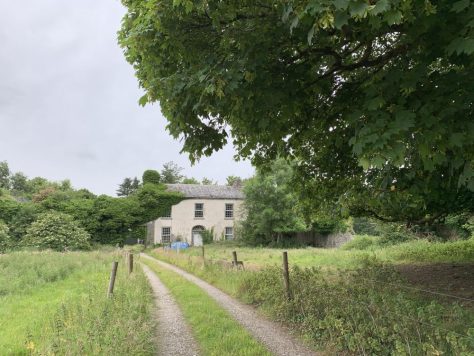 Cragbrien House has seen better days but is nevertheless still standing and bears witness to the history of the townland.