The Dividing Road through Kilmurry-Ibrickane Church and Graveyard

Why is there a dividing road? 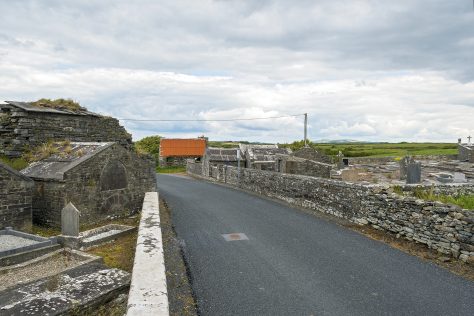 What I find intriguing about Kilmurry-Ibrickane Church ruins and graveyard is the road that divides the site in two. 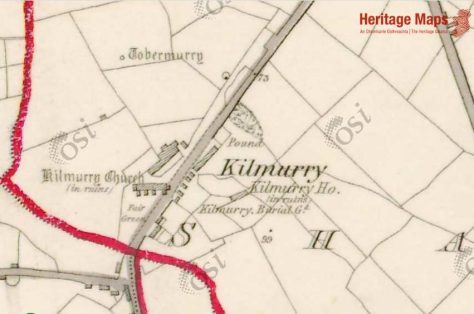 Assuming the graveyard was once a single unit, the question is when it was divided?  According to a local historian with fantastic knowledge of the area, the local landlord demanded that the bodies were dug up and moved in order to accommodate the construction of the road. This means that the graveyard was in existence before the road.
Griffiths Valuation of Tenements shows that Charles McDonnell was the landlord of Kilmurry in 1855. One could suppose he was the landlord who made this order to inter the remains of the deceased and to install this road for his personal use. But because we don’t have any earlier records I cannot verify this as a fact. Unfortunately, the Down survey maps of 1711 were destroyed in a fire and so we do not know the size of the graveyard in the 1700s. I find this story harrowing and can’t begin to imagine the upset it cause the surviving relatives. 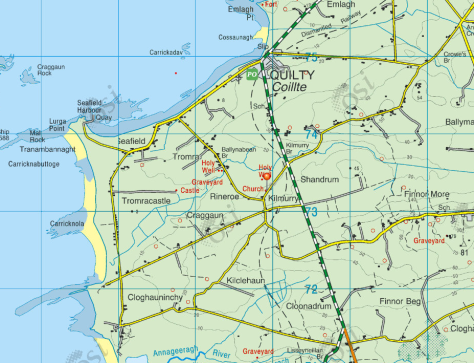 Locational map for Kilmurry-Ibrickane Church and Graveyard. Site indicated with red pin. ‘Data from the maps database accessed through the Heritage Maps Viewer at www.heritagemaps.ie, 21-11-2022’.

Kilmurry Church and graveyard is located just outside the village of Quilty in Co. Clare in the townland of Shandrum. If you’re travelling through Quilty and stay on the N67, pass the shop, school and petrol station on the Kilrush road.  Turn to the right down a narrow road and pass under the old Railway tracks. Follow this road for a few minutes and it will bring you to the Church and divided graveyard. 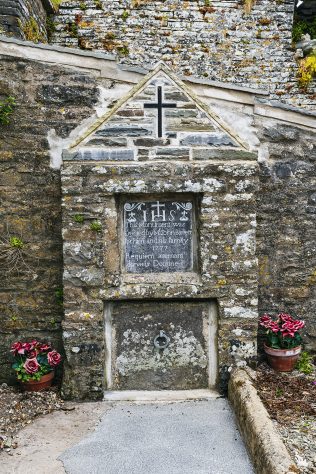 You enter the Church through a Romanesque 15th century limestone cut doorway. Inside the church you will find the oldest tomb immediately on your left. This tomb was erected by Mr John Barrett.

The Church is not mentioned in the papal taxation lists of 1302 (Ref: Lynch. C, Carey. O Rian na Manach ). The earliest part of the church is located at the east end.  You will notice a change in masonry style along the north wall where the church was extended to the west in the 15th century. The Church measures approximately 270 m in length and 75m wide. The original roof was constructed of Liscannor slab.

In 1649 Cromwell’s soldiers desecrated all the churches in the area. It is rumoured that Kilmurry-ibrickane Church was the last to be pillaged in this area. 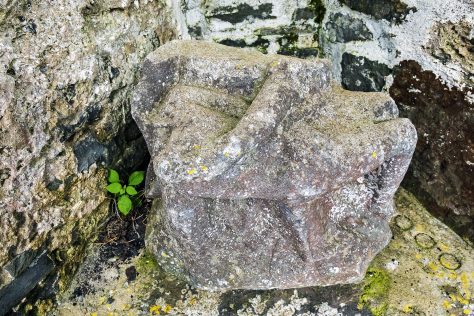 On the south interior wall of the Church, guarded behind iron bars, are the fragmentary remains of a Pieta statue which dates back to the 15th century. The Pieta depicts the Blessed Virgin Mary with the dead Christ draped across her lap.

Over the west gable you can see a broken bell chamber. Also a window and corbels which indicate the possibility of a gallery or a living quarters for the priest.

House tombs are plentiful in the graveyards of West Clare. They are very noticeable in Kilmurry-Ibrickane graveyard and some can be seen clearly from the roadside.  There are also numerous recumbent grave slabs known as ledgers.  However, due to age and weathering, some of the inscriptions are no longer legible. The iconography on several slabs is very interesting.  According to local information, the inscriptions were written by local school teachers for the families and given to the stone cutter, who would then chisel out each letter and symbol. On some graves you will notice that the wording was too large for the slab and the stone cutter would have to improvise by moving a letter above or below the word. The iconography is so intricate, it must have been a slow tedious skill performed in harsh conditions along the Wild Atlantic Way! 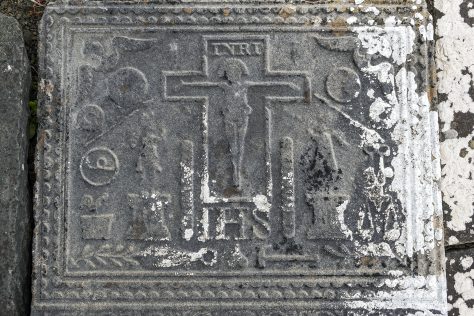 Crucifix: This is usually the centrepiece of the composition.

30 Pieces of Silver: Represents the money received by Judas for betraying Jesus. The coins are usually divided in two columns of 15.

Cherubs or Angels: These are usually present for artistic balance.

Ladder: The ladder was used to remove the body of Christ from the cross.

Hammer: Used to nail Christ to the cross.

Pincers: These were used to remove the nails. Some iconography will show the nails in the pincers.

Keys: Symbolic as the keys for the Kingdom of heaven.

Scales: Represents the scales of justice. Some references have been made to this icon, saying that on the day of judgement St. Michael will evaluate all our lives.

Shovel: Sometimes you may see two shovels, but this would be deemed inappropriate as Christ was interred in a tomb and not buried. Another possibility that two shovels would be shown is that they could be representing the tools used to dig a hole for the cross.

Chalice: Represents the blood of Christ that he shed on the cross. This icon is quite common and was probably the easiest of the icons to be carved.

Soldiers: Represents the two soldiers Longinus and Stephaton, who were present at the crucifixion of Christ. Longinus pierced the side of Christ with a sword and Stephaton offered a vinegar soaked sponge to the suffering Christ.
Foliage : May represent plants that were growing in the vicinity of the crucifixion.

Sun, Moon and sometimes Stars: these are not very common and are self-explanatory.

Serpent: often enclosed in a circle. Sometimes the crucifix may be shown triumphing over the serpent.

Cock and Pot: Carving of a rooster in a pot represents the story of Peter telling his wife of the crucifixion and anticipated resurrection after three days. His wife replies “Jesus is as likely to rise again as that chicken boiling in the pot nearby is of coming back to life” with that the chicken flies up and crows from the pot . Folklore tells us that the cock said as he crew “Mac na hOighe Slán’ meaning ‘The Son of the Virgin is saved’, even though many would have heard Cock a doodle doo.