zoom
Townland name on millennial stone under the church bell in the grounds of St Mary’s Church.
Ann Marie Meaney 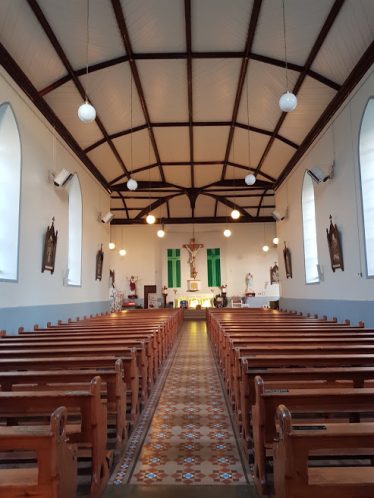 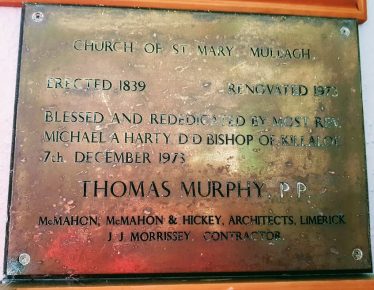 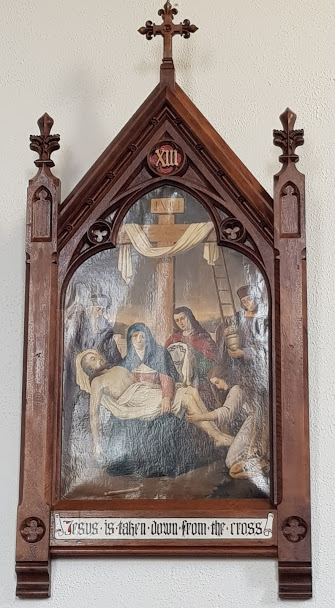 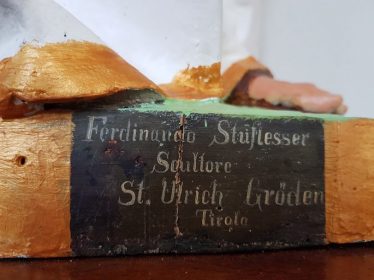 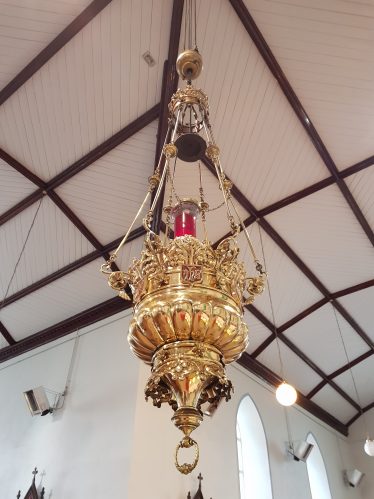 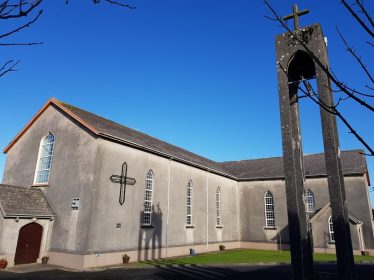 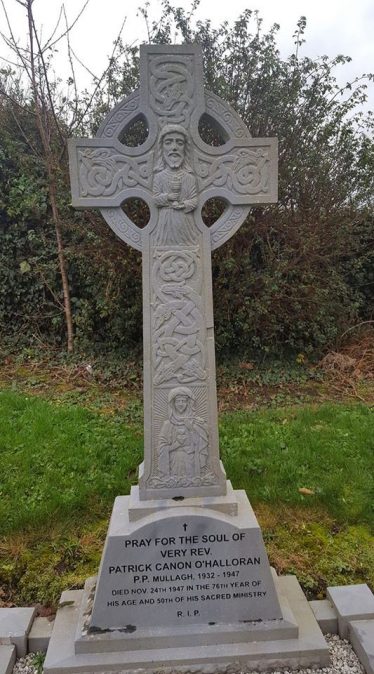 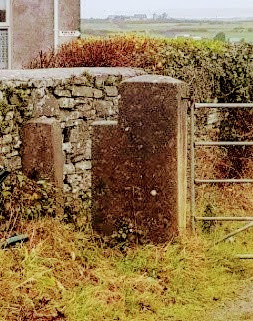 Where is St Mary’s Church?

St. Mary’s Church lies in the heart of the hilltop village of Mullagh approximately 5 kilometres from the Atlantic in West Clare.

It is one of three churches in the Roman Catholic parish of Kilmurry Ibrickane in the Diocese of Killaloe. The other two are ‘Our Lady Star of the Sea’ in Quilty and ‘Most Holy Redeemer’ in Coore.

St Mary’s Church, grounds and graveyard lie across the townland boundary of Finnor More and Carrowlagan.

Why was St Mary’s Church built?

From the 17th and into the 19th century the approximate boundaries of the civil parishes of Kilmurry Ibrickane and neighbouring Kilfarboy were administered as one Roman Catholic parish.

A State Register from 1704 records that two priests with same surname – Fr Teige and Fr Francis Shannon were administering this parish.  It is likely that they were related but the exact relationship is unknown.

By 1838, the population of this large parish had risen to almost 20,000.  This caused difficulties with administering to all the people and the need for two churches was identified.  At this time two brothers Fr Anthony and Fr Patrick McGuane were the priests in charge. They set about overseeing the building of a church in Milltown Malbay and another in Mullagh, both based on a similar plan.  But Fr Anthony McGuane died in March 1839 before the churches were complete and Fr Patrick became the parish priest.

The parish was then divided in two – Milltown Malbay and Mullagh.  The Milltown Malbay parish approximated with the boundaries of the old civil parish of Kilfarboy, while the boundaries of the Mullagh parish approximated with those of the civil parish of Kilmurry Ibrickane.  The older names are still referred to today. The McGuane’s grandnephew Fr Edmund Barry became the first parish priest of Mullagh.  (Ó Murchadha, C. 2008)

The Construction of St Mary’s Church

The construction of the present day church of St Mary’s in Mullagh began c. 1839, replacing a Mass House which stood in the Market Village Square. Built to a similar plan as St Joseph’s Church in Miltown Malbay, it was planned to hold a congregation of up to 3,000 people. The tower and spire were almost complete when on the “Night of the Big Wind”, 6th January 1839, they crashed through the newly finished roof causing considerable damage and were never reconstructed.

The present-day St Mary’s Church is cruciform in plan with a gable-front.  There are three lancet windows in each of the side walls of the nave and two in the transept walls which contain plain glass.  The lancet windows in the gable walls of the transepts and those in the east wall contain stained glass. A gabled projecting porch is attached to the western side of each transepts and to the entrance gable.

The original street boundary walls and gate piers were built from the stone of the ruined tower and spire, knocked on the ‘Night of the Big Wind’ 1839 (Ryan, P. 1969). In 1895 Rev John McGarry appealed to the Kilrush Union for the construction of an enclosing wall (Clare Champion, September 17, 2010). The present day street boundary wall and gate piers are of concrete brick and were installed in 1973 as part of a major renovation programme.  Also at this time, the choir gallery, marble altar railings and side altars were removed and the church bell was moved into a free standing bell tower in the grounds (pers. comm. Michael Casey)

St Mary’s is a protected structure, listed under the National Inventory of Architectural Heritage, registration number 20403801 and on the County Clare Record of Protected Structures.

Rev James Cahir installed the present-day altar in the church during his service in the parish (1876 to 1914) to remember his predecessors (Clare Champion, August 15, 1939).  It would have originally been positioned against the rear wall of the Sanctuary as the priest would have celebrated Mass with his back to the congregation.

Along the base of the altar is an inscribed dedication ‘✠PRAY FOR THE SOULS OF THE REV. E. BARRY PP & THE REV. A. McGUANE PP IN MEMORY OF WHOM THIS ALTAR IS ERECTED’. Both of these priests are buried in the church along with Father Moran.

The altar frontal depicts three scenes from the life of Mary –The Annunciation, the Nativity and The Crowning of the Blessed Virgin Mary.

Between 1915 and 1930, Canon Glynn installed marble altar rails, which were the gift of Right Rev. Monsignor John Sexton of the Australian mission and a native of Finnor More (Ryan. P. 1969)

The altar was brought forward during the 1973 renovations.  At the same time, the altar rails and side altars were removed.

The lancet windows in the gable walls of each transept and those in the east wall contain stained glass.

The window in the gable end of the north transept, suffered storm damage in recent years and as a result, the central section was replaced with an image of St Therese of Lisieux set within a mandorla. The original window was donated by the Greene Family.

The most recently installed stained glass is located in the south transept.  It was donated in memory of Martin McInerney, born in Knocknahilla and who died in Michigan, USA in 1984.  The imagery displayed is connected to the land and the sea.  It includes seaweed, pebbles on a beach, the bow of a boat, wheat stalks, fish and a currach.  Religious symbols include the Holy Spirit depicted as a dove flying into the rising or setting sun and a cross with the central bars entwined by knotwork and inscribed with the words: Christ Yesterday, Today, Forever.

In the east wall, on each side of the sanctuary are two colourful lancet windows with similar stained glass designs. The History of Kilmurry-Ibrickane (Ryan, P. 1969) states that all these windows were inserted following Hurricane Debbie in 1961.  A. W. Lyons, a famous Dublin stained glass window manufacturer’s name is inscribed on two of these windows.

The subject and donors of these windows from the north to south transept are:

Stations of the Cross

Little is known of the fourteen Stations of the Cross which are said to have been gifted by a local family. They consist of framed lithographs.  The wooden frames resemble the gable end of a church with a cross on the gable apex. The side columns are topped with decorative finials and a carved ogee-headed decorative device forms an inner frame.

Statues of the Sacred Heart and Our Lady of Mercy

Donated by the McNamara family of Craggaknock are two post World War One (circa 1920) beautifully hand carved wooden statues placed to each side of the altar.

On the bottom of the Sacred Heart statue is a small inscription in Italian: ‘Ferdinando Stuflesser, Scultore, St. Ulrich Gröden, Tirole’. The Stuflesser Studios, still located in Ortisei (also known as St. Ulrich Gröden) in the traditional woodcarving area of South Tirol, used zirbel –a local pine wood from the Tirol to make these statues.  The statues were originally located on two side altars which were removed in 1973.  The same company recently created the processional statue of Our Lady, for Knock Shrine in August 2019 (pers. comm. Filip Stuflesser, 27th November 2019).

As was traditional in Roman Catholic Churches, the Sanctuary Lamp is hung in front of the altar. Suspended on a chain from the crossing point of the ceiling ribs, the base is inscribed “Sarah McInerney 1926 ✠ Presented to Rev. John Canon Glynn P.P.”

The free standing bell located in the church grounds today is inscribed “Kilmurry Ibrickane 1911” and ‘M. O’Byrne Bell Foundry”… Local information recalls that this bell was originally located in the church, under the rafters at the gable end of the nave.  Following the church renovation in 1973, the bell was placed in the newly constructed external bell tower. It was rung manually until an electric mechanism was installed by a Kilmihil based firm in more recent years. (pers. comm. Michael Casey).

The original baptismal font, which once stood at the rear of the nave, was removed during the 1973 renovations and is now located at the entrance gate to the church grounds. It was replaced with the present day marble font positioned near the altar.

The original font consists of an oval bowl with internal division. The bowl stands on a rectangular stone pedestal, decorated on each face with an ogee headed blind opening. The pedestal is supported on a square stepped base.

Canon O’Halloran described as “a most zealous priest and a man of tireless energy” (Ryan, P. 1969), served in the parish from 1932 to 1947. He was buried in the church grounds. His headstone was carved in the 1940’s by Murray stonemasons of Nenagh. It consists of a Celtic Cross with a carved relief figure in the centre and features a zoomorphic interlace pattern derived from the Urnes style, which is often found on Romanesque doors and crosses of the 12th century” (pers. comm. Dr Christy Cunniffe).

A stile is a typical indicator of a mass path and one is located on the church wall near to the sacristy.  This one marks the end of the paths which crossed the former Fair Green.

At least five mass paths are known to have led into Mullagh, several of which can be identified as footpaths (marked F.P. on the 2nd editions 6-inch Ordnance Survey map c. 1930).

The author is particularly interested in further study of these Mass Paths and will be continuing with this project.

Thank you to the following for their assistance in completing this project: