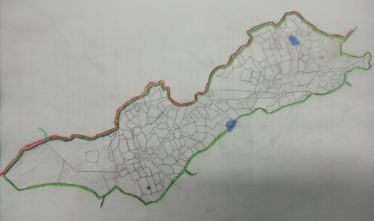 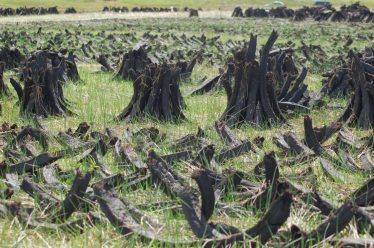 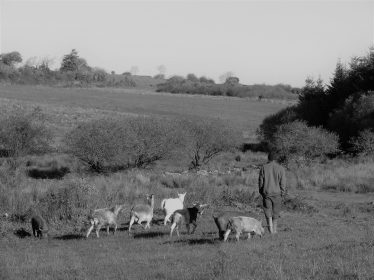 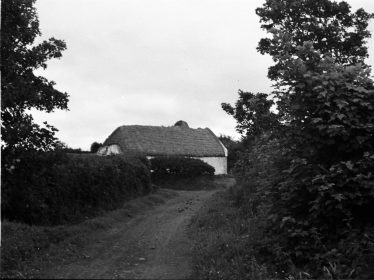 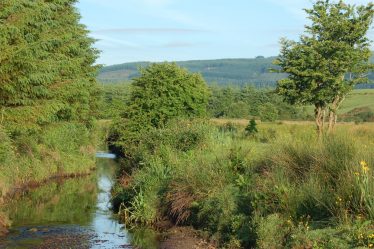 zoom
The Inagh river with Mount Callan in the background. This is the stretch of river which was rerouted in the late 19th century.
Ragna Gruendler 2014 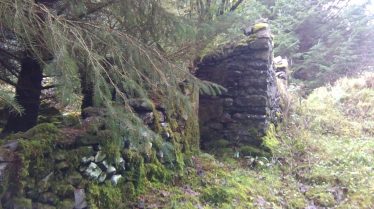 To understand the lifestyle of people, we first need to understand the landscape they are living in.
Clontabonniv is located in the County of Clare, the Barony of the Islands, the parish of Kilmaley and the community of Connolly.
It covers an area of 309.11 hectares. The boundaries of the townland are defined by the Inagh river, flowing from Mount Callan, to the north and a small stream to the south. The stream flows into Cloontabonniv lake. The Inagh river also forms the barony and parish boundary between the baronies of Inchiquin and Islands and the parishes of Kilmaley and Inagh. Looking to the west from almost anywhere in the townland, Mount Callan dominates the view. It protects the land from westerly winds.
The landscape is dominated by low drumlins, which are small hills formed by the receding ice of the last ice age. The soil is acidic and in some areas the bedrock is exposed. There are numerous streams, springs, wells and two small lakes.

Between the years 1847 and 1900 approximately 697 metres of the Inagh river was rerouted to the south, probably to improve drainage to this part of the townland. There is no official record of the work which may have been done by local people. The approximately 18 acre field which is now on the north side of the current river is known locally as the Inch (island).

Between 1987 and 2004 a total of 195.5 hectares were planted with Sitka Spruce, leaving only 113.5 hectares of arable land in Cloontabonniv.

Water was supplied by private wells until about 1985 when the Kilmaley-Inagh water scheme was established.

The earliest evidence of human settlement in Cloontabonniv are two ringforts, one of which is badly deteriorated.
Ringforts were enclosed farmsteads, which began to be built in Ireland from about 500 BC. Usually circular in plan they can measure from 20 to 60m in diameter and were enclosed by one or more earthen banks, often topped with a timber palisade. The larger fort in Cloontabonniv located in the east of the townland measures approximately 45m in diameter. The smaller, in the south appears to have been around 30m. They are 2.5 kilometres apart.
During the 18th and 19th centuries, people in Cloontabonniv sustained themselves through farming. People kept small herds of suckler cows and grew their vegetables in small gardens. Some farmers had bog in the neighbouring townland of Ballynoe, where local families still cut turf to the present day. Change in lifestyle was slow. Electricity was connected to the townland sometime after 1957.

The Tithe Applotment Books from 1826, show 14 occupiers of land over one acre in Cloontabonniv who were liable to pay a tithe to the Church of Ireland. The names listed were Costello, three separate Carney’s, Markham, Keane, Lynch, Harvey, Kennedy, Meehan, Griffy, Burke and Howard. Some of these surnames are still found in the locality namely Kennedy and Carney.

The earliest full record of persons living in Cloontabonniv is from the 1841 census. 201 people are recorded living in 30 houses. The 1851 census shows that the population had dropped to 108 people in 18 houses.

When Griffith’s Valuation took place in 1855, 19 houses were occupied in the townland.

Records from the 1901census show that there were 106 people living in 21 households. Almost all were involved in farming, with the exception of Patrick Kearney (18) who worked as a blacksmith and another Patrick Kearney (29) who was a carpenter. Some of the local women were employed as domestic help.
The 1911census records a population drop to 99 people in 18 households. Again most worked the land. The younger Patrick Kearney who was listed as a blacksmith ten years earlier seems to have left the townland by then, however the carpenter P.Kearney was still living in Cloontabonniv.
The drop in population was most likely due to immigration to either America or Australia.

Currently there are approximately 28 people living in 11 separate households. Very few are farming, most people now work in local towns commuting back and forth daily to Cloontabonniv.