As part of the excellent Reading Your Local Landscape course, we were tasked with creating a project of our own research. A visit to one of the local burial grounds began my fascination with the early 19th century iconography that can be found on several grave slabs in the Loop Head area.

One of the graves in Kilnagalliagh Burial Ground particularly caught my attention. It bears the inscription:

Most grave slabs depict the usual, quite symmetrical, design of Jesus on the cross surrounded by various passion symbols.  These can include the thirty pieces of silver, ladders, angels, a cock on the pot, scales, the sun and the moon.  There may also be symbols depicting the trade of the deceased, which are known as vocational symbols.

My fascination is with the grave slabs where the stone mason displays his own style and sometimes tells a more locally based story. 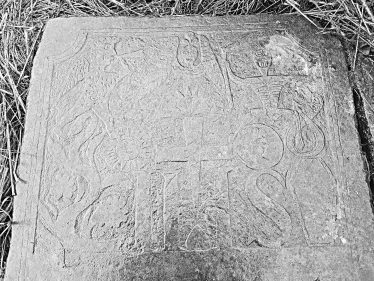 On the above mentioned grave slab in Kilnagalliagh Burial Ground, the unique craftsmanship of the stone mason is clearly seen. On the top right-hand side of the slab, a stylised skeleton holding a scythe and arrow and possibly wearing a bishop’s mitre hat is depicted. Beneath the skeleton is a serpent on the right-hand side and the last trumpeter on the left. Roughly in the middle is an angel. Underneath these symbols are a depiction of an olive tree, the IHS symbol with a cross and inverted heart and a coffin.

All the elements of this design are roughly carved into the stone, lacking the finesse of the usual carving seen on such grave slabs. This in itself makes it more charming – more unusual.

The script writing beneath this naïve carving is in stark contrast. The beautiful, soft, rolling script has been skilfully carved by an experienced stone mason.

Scattery Island and the Tale of St Senan 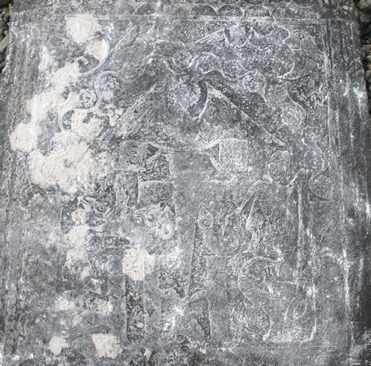 On a visit to Scattery Island I discovered another rather naïve carving in the graveyard of Teampall na Marbh.  The graveslab in question commemorated Patrick Nolan who died in 1819.  The carving on this graveslab depicts the well-known local tale of St Senan expelling the snakes and a MONSTER! 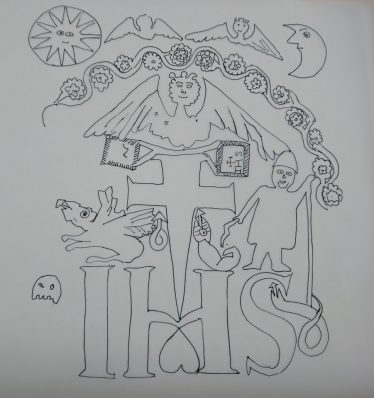 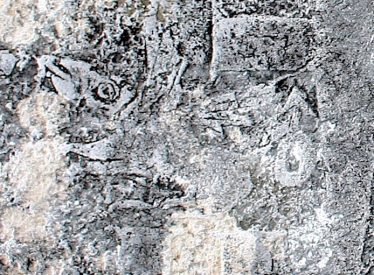 The monster is mentioned in several publications which are housed in the Local Studies Centre of Clare County Library in Ennis.

This is one of the stories –

Before Senan arrived on Scattery, also called Inis Cathaigh, a legendary monster called “The Cathach” inhabited the island and terrorised people who were afraid to approach the island. Sometimes referred to as the “peist” or sea-serpent, the Cathach was depicted on a carving in the old chapel of Kilrush as the “Cata”. On his arrival in the island the Angel Raphael led Senan to the highest hill from which he was able to locate the Cathach. He then faced the monster and ordered it, in the name of the Trinity, to depart from the island. In some stories the Cathach obeyed immediately and “neither stopped nor stayed” until he reached the dark waters of Doolough Lake at the foot of Mount Callan.

Thanks to Peter Beirne of the Local Study Centre, Clare County Library  for his help and patience, while I was undertaking this research.

All photos and illustrations are by Kim Thittichai.