As part of the ‘Reading your Local Landscape’ course, we were tasked with creating a project of our own research. 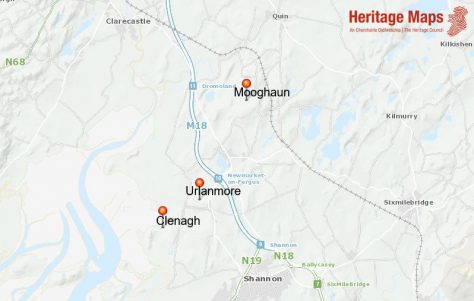 In my locality of Newmarket-On-Fergus, there are a number of tower-houses and castles scattered across the parish. There are only a few of these structures that are still standing in good condition and are in some use today. However, most of these buildings are only partly standing, the majority have become dilapidated over the years, collapsing into piles of rubble and smothered over by ivy. The following is an account of some of the history of three of these buildings and the varying condition in which they can be found today.

Mooghaun Tower-house is a fine example of a surviving Gaelic tower- house, which was built circa 1470-1490 by Donal Mac Namara. Most tower-houses were surrounded by a ‘bawn’ or walled enclosure. The term ‘bawn’ derives from bó-dhún meaning cow-fortress and these walled enclosures often had buildings within the bounds. The remains of the ‘Bawn Wall’ at Mooghaun Towerhouse are still evident today.

Sketch of Mooghaun Towerhouse, and the nearby hill fort 1908, T.J. Westropp

Early tower-houses often had open fires that burned in the middle of the top floor as chimneys generally only came to be built in the sixteenth century. In the tower-house at Mooghaun, there is a wide plain fireplace with a plaque carved in relief with the date ‘AD 1610’ and it is situated in the hall on the second floor. It is very likely that both this and a second fireplace on the floor below, were inserted at the same time.

History of the Tower-house of the Mooghaun

Apart from a few short intervals, it has been inhabited since its construction. Although most of the history of the castle relates to the Mac Namaras, there are also some references to the O’Brien family who owned the land on which it stood. In 1560, the castle was granted to Conor O’ Brien, Third Earl of Thomond by Queen Elizabeth I.

In 1563 the Sheriff of County Clare made a formal demand through the English council on Conor O’Brien, for the restoration of Mooghaun Castle to its lawful owner Mahon Mac Namara. This case was partially successful, the Mac Namaras continued to live at Mooghaun until their fate changed with the onset of the Catholic Uprising and rebellion of 1641 and in 1652 with the occupation of the Cromwellian garrison. After the Cromwellian campaign it was again occupied by a branch of the Mac Namara family though the lands and property were owned by the O’Briens of Dromoland. By 1837 the castle was unoccupied and in the 1890s it was again occupied, this time by the gamekeeper of the Dromoland Estate and it was recorded that it had its roof intact at the time.

In the early 1970s it was bought from the Dromoland Estate by Mr & Mrs F. Mc Ginnis of San Francisco. It was described at the time as being an empty shell. The tower was re-roofed and the building was plumbed and wired by the Mc Ginnis family who still use the towerhouse as a holiday residence today. (Breen, M & Cróinín, R. 2006).

The tower-house at Mooghaun still stands in good condition because of its many centuries of occupation and repairs and upkeep to the structure. Castles and other similar building that the Cromwellian army had no use for were often demolished and rendered indefensible, however because of their occupation of Mooghaun Castle, the building was conserved and this explains how it remains in good condition to this day. 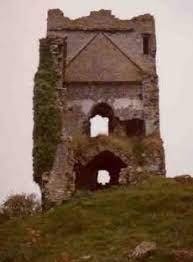 The remains of Urlanmore Castle are to be found south west of Carrigoran Nursing Home, just outside the village of Newmarket-On-Fergus.

History of the Tower-House at Urlanmore

The castle at Urlanmore was built c.1460 by the MacClancys, a prominent Irish chieftain family in the locality. It has a rich history and is even reputed as being the birthplace of the infamous Máire Rua who became a notorious figure in Irish folklore and is prominently associated with Leamaneh Castle. 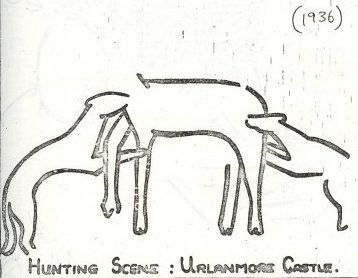 Fresco Hunting Scene from ‘A Survey of Monuments of Archaeological and Historical Interest in the Barony of Bunratty Lower, Co. Clare’ William Gerrard Ryan 1980 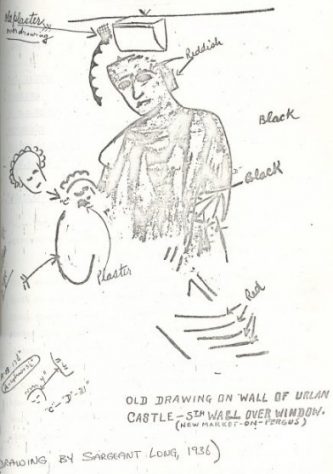 Fresco Sketch from A Survey of Monuments of Archaeological and Historical Interest in the Barony of Bunratty Lower, Co. Clare’ William Gerrard Ryan 1980

It is not officially known when the castle began to fall into disrepair but in 1899, Westropp described it ‘as being similar to Leamaneh, in that it had a large Elizabethan house attached to the older turret’ (Breen, M. & Cróinín, R. 2006). In its prime, the castle was an imposing structure with a four storied tower elevated on a limestone outcrop with a vaulted chamber on the lowest floor. Frescoes depicting a hunting scene of two hounds and a stag, a representation of the Virgin Mary and Child and a portrait of St. Francis with animals were still visible on the inner walls on the first floor up until the 1990s. (Ryan, W.G. 1980). 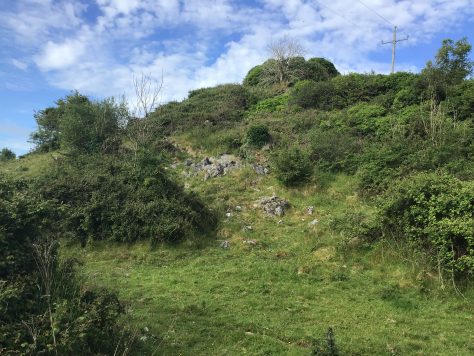 The towerhouse remained relatively intact until late 1998 when the section that contained the staircase collapsed during a storm. A few months later there was another collapse leaving little of the once prominent structure standing, with the exception of the south east corner, which remained partially intact surrounded by piles of rubble. Today, the existence of the towerhouse is only hinted at by the rubble and broken masonry that isn’t smothered by ivy and briars.

According to Breen & Cróinín, ‘the demise of the towerhouse arose from the weak mortar used in the construction, which perished and turned to dust, due to time and the elements’. From my own observations of photographs taken of the castle in the 1980s, it appears that the cornerstones had been removed and the foundation of the whole structure was undermined leaving the building vulnerable to the elements. In my opinion, this, combined with the lack of occupation of the castle for a long number of years led to its current state of destruction. 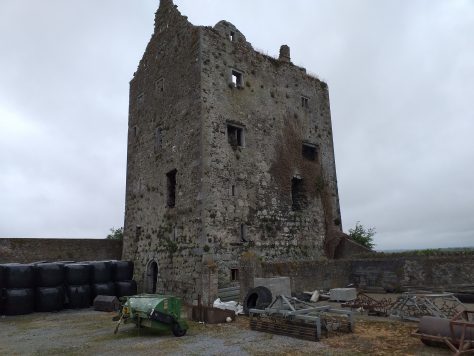 Clenagh Tower-House stands near the Fergus Estuary in the parish of Kilmaleery near Newmarket-On-Fergus. The Tower-house was built by the MacMahon family in the early seventeenth century. It consists of four main storeys and a garret in the roof on a rectangular base. The first floor rests on a stone vault and the other floors were wooden. The entrance to the castle has a carved limestone, semi-circular arched doorway. On the outside right-hand corner at eye-level, there is an image of the Síle na Gig, an ancient symbol of lust and fertility carved into a large corner stone. These symbols are commonly found in Medieval churches, they are rare in castles. (O’Brien, J. Round About Shannon)

The tower-house and ‘Bawn’ wall are in a fair state of preservation, the walls being solid, well-built with large cornerstones and are still well pointed and the ivy has been kept under control. There is now a working farm surrounding the castle and some of the sixteenth and nineteenth century ‘bawn’ walls are still being used to secure farm machinery today.

History of the Tower-House at Clenagh 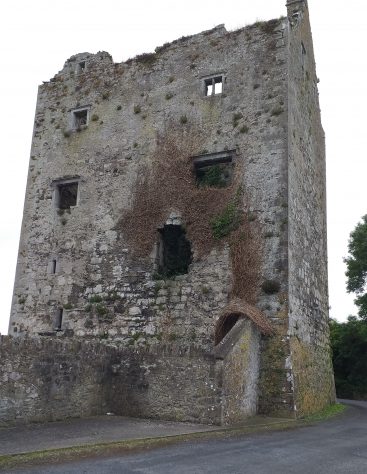 View of Clenagh Towerhouse from the public road (June 2021)

Clenagh castle has an interesting history due to its connection to the ancient harp of Brian Boru, which is said to have been displayed in the hall of the castle for about a hundred years. The harp formed part of the dowry of Lady Eleanor de Burgh who married Turlough MacMahon of Clenagh. The harp which dates from the fourteenth or fifteenth century and is currently in Trinity College Dublin has a rich history and has become a national symbol of Ireland. It is also known that Máire Rua and her sister Áine spent some time during their youth at Clenagh.

While the tower-house is uninhabitable today, the castle is situated on the edge of a rural public road, on the grounds of a working farm, as previously mentioned, which explains the need for ongoing maintenance of the main structure of the building.

In conclusion, the tower-houses which I have discussed above that are in a relatively fair state of preservation have had ongoing attention paid to them, while those that have been abandoned have fallen into a very poor state or have even completely disappeared.

Please note that the towerhouses detailed in this report are all located on private land and access is only by permission of the owners.

Ryan, William Gerrard 1980  ‘A Survey of Monuments of Archaeological and Historical Interest in the Barony of Bunratty Lower, Co. Clare’ Clare County Library.