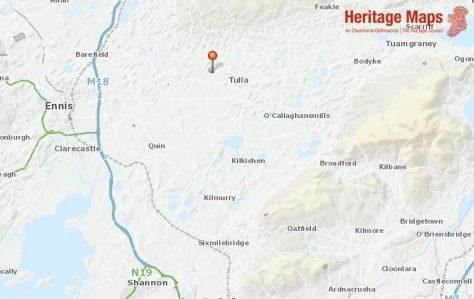 Location of Toomeens Caves. Data from the basemaps gallery accessed on heritagemaps.ie 23-6-2021

I’ve always had an interest in caves being fascinated how the action of water can create such special places. Over the years, having visited Doolin and Aillwee Caves in Clare, Crag Cave in Kerry, Mitchelstown Caves, Dunmore Cave in Co. Kilkenny & Marble Arch Caves in Co. Fermanagh, I’ve been in awe at the sight of stalagmites and stalactites and other formations. So, when I got the opportunity to visit Toomeens Caves as part of the ‘Reading Your Local Landscape’ training course, I looked forward to the experience.

Located just outside Tulla, Co. Clare these caves are on the former Kiltanon Estate. 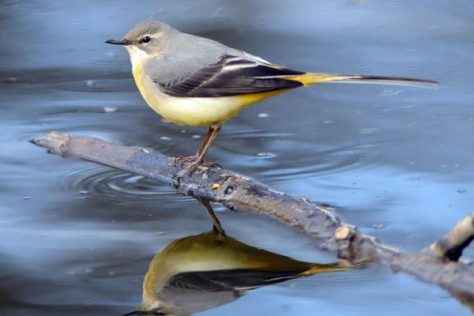 Situated in a beautiful woodland grove, the Toomeens are a hidden gem in the East Clare countryside. They include quiet pools, fast flowing currents, intriguing grottoes and even a little beach! This special area is rich in beech, oak, hawthorn and sycamore trees. In spring, it is an enchanted place as bluebells, herb robert and wild garlic flowers cover the woodland floor. The place is alive with birdsong and grey wagtails dart about catching insects in the river. Badgers and foxes have been spotted many times. 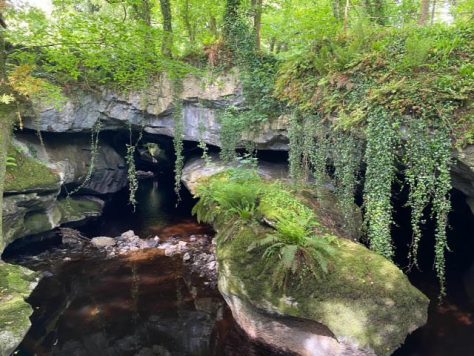 The caves were formed by the movement of the Kiltanon River (sometimes called the Hell River, possibly because of the underground features). Over many centuries, the action of the flowing water eroded the underlying rock and the river went underground causing the appearance of a series of caves and sink-holes including one known as “The Black Hole of Calcutta”. There are ten caves in total, some with beautiful scalloped features and one even resembling a duck’s head! 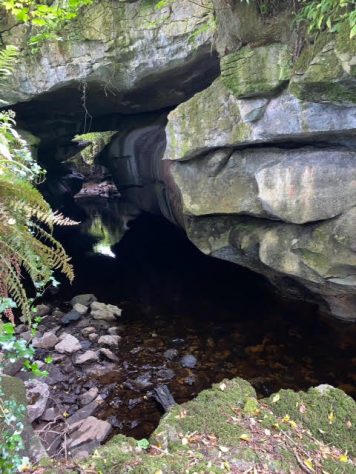 The river has carved out the cave system

The following description is provided on the Clare County Council website –

“Many factors including surface collapse, tree roots forcing open joints in the limestone and humid acids (derived from rotting vegetation) dissolving the limestone will see the cave eventually becoming an open canyon with the river downcutting its limestone bed”  (Parkes, M. 2014) 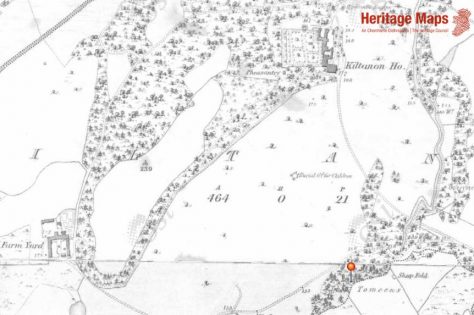 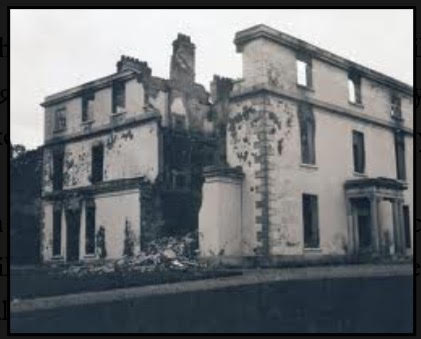 The Kiltanon Estate was originally owned by the Molony Family. They settled in County Clare in the early 17th century. By the 1870s an estate of over 10,000 acres was in the possession of Major William Mills Molony of Kiltanon. The sale of over 5,000 acres of this estate to the Congested Districts’ Board was agreed in 1909. (http://landedestates.ie)

The Molony residence at Kiltanon was an impressive three-storey Georgian house built in 1833.  It was burned in 1920.

“The burning of Kiltannon House on the 15 September 1920 is generally accepted to have been carried out by Republicans active in the hills to the north of the parish. A group of men, some armed with revolvers, rang the doorbell at 2am, claiming to be police. Their information was good: Colonel William Moloney and his wife were in Dublin, leaving the house in the care of the butler, Philip McGrath. According to McGrath, the men locked the door and turned on all the taps before seizing the keys in the pantry. One key was helpfully labelled “Paraffin Store”; there was only petrol available, however, and it was poured over the oak staircase after the chairs of the house had been stacked underneath. The raiders remained until the fire had taken hold. A photograph in the O’Callaghan Westropp Collection in Clare County Library shows the shell of the building, with most of the damage in the area of the staircase” (Myles, F. 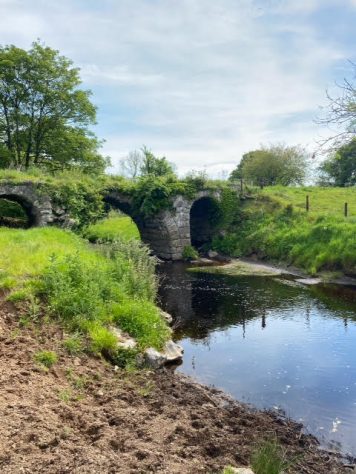 The remains of the bridge at Kiltanon crossing the Kiltanon River.

A private road on the land connected two other large estates, Bunavory and Cragg which were connected to the Malony family. A beautiful cut-stone bridge on this road was damaged in an explosion in 1920. The parapet is gone but the arches spanning the river remain. 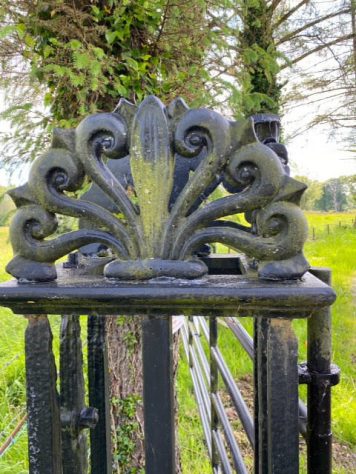 There are still some of the original cast-iron handrails and gates which were in use on the estate in the 1800s surviving today. They are decorated with “sunburst” symbols which may be the trademark of a local blacksmith.

In the 1700 and 1800’s, the Toomeens caves were a popular tourist attraction. The local gentry brought visitors there and sometimes musical concerts were held. Llyod on his ‘Tour of Ireland’ in 1780, compared the caves to the natural wonders to be seen on the grand tour of Europe, which was a common occupation of the wealthy at that time.

“Let the Literati and Curious, after taking the Continental Tour of EUROPE, praise and, even, write of the Imaginary Beauties and Natural Curiosities of ITALY and SWITZERLAND——pray, let them, also, on a cool Reflection, repair to the County of CLARE, View and touch upon the truely Subterraneous and really Un-artificial Curiosities of the TO-MINES; they will Impartially admit that these naturally Enchanting Rarities may be freely visited, and generously treated of, by the Ingenious and Learned of this and after Ages”. (Lloyd, 1780)

By the 19th century the caves were less well known and had been replaced in the tourists itinerary by other more accessible caves and natural features in County Clare.

“Close to an abandoned mine, within almost two miles of Tulla, on the Moloney property of Kiltannon, is one of those freaks of nature, which if found say in England, Scotland or Wales, would attract crowds of visitors, and may mayhap inspire the poet’s pen and the painter’s and which is scarcely ever noticed or heard of. It is called “the Tuameens”.  A small stream coming down from the Glendee Hills has made itself a subterraneous passage for a considerable distance, till it emerges again and pursues its even course towards the Shannon. There are at intervals opening from above, overhung and festooned with honeysuckle and other beautiful undergrowth, through which the buried stream is easily reached. With some little difficulty, if the river be not swollen with late rains, the whole way underground may be traversed. It is with no little feeling of wonder and almost of awe that the eye travels over the dark winding river, having on both sides, massive lines of rock, apparently chiselled by the hand of man, but really chiselled by the slow yet ceaseless drip of water from above, and serving as buttresses for the splendid arches of limestone which bridge the sunken stream. Here, as at the better known Bridges of Ross, near Loop Head, nature looks not unlike art as it comes from the brain and hand of man” (White, P. 1893)

Today the caves remain a hidden gem in the County Clare landscape.

Please note that these caves are on private land and can only be visited with permission of the owner, Pat Harrison

Myles, Franc “The tar on the wall and the bishop’s table”  Clare County Library