As part of the ‘Reading Your Local Landscape’ training course, I have put together the following account to highlight the vibrant recreational and heritage community project taking place in the Knockanuarha 12 O’Clock Hills. 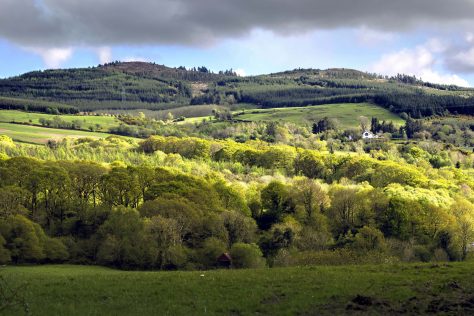 View of the 12 o’clock hills from the Broadford Road

What’s in a Name?

The Twelve O’Clock hills is a local and popular name for a group of hills that lie South East of Kilkishen between the townland of Belvoir and the small settlement of Oatfield. The tallest hill is Knockanuarha at 309m.  It is thought that the name derives from a tradition of telling the time by observing the position of the sun in relation to these landmarks. 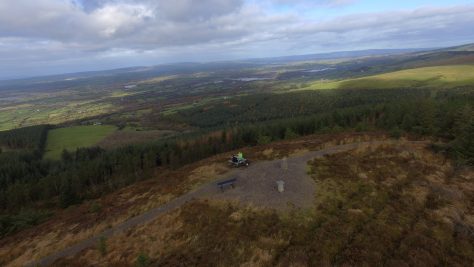 From these Twelve O’Clock Hills much of County Clare is on view including West Clare, the Burren and the Shannon Estuary while locally Kilkishen village, Cullaun Lake and Steele’s Turret are prominent.  With a little effort, the town of Ennis and many of the villages of East Clare will reveal themselves.  Then the attention may be drawn to an attempt to identify the many lakes and bog lands, castles and woodlands.  Maybe after a little refreshment and if the day is exceptionally clear, the gaze might lift to the distant horizon; here is an opportunity to pick out the high mountains of every county in Munster. 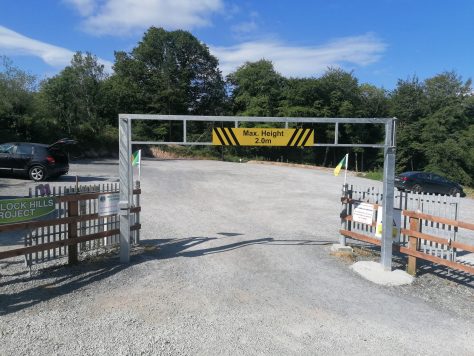 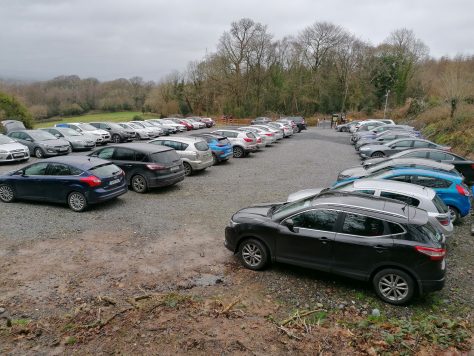 There are two Trailheads for the walks in the 12 O’clock Hills. The main one is at Belvoir where there is a spacious carpark on two levels with a capacity for at least 90 cars. The other one is at Snaty with roadside parking for 16 cars. Three looped walking trails provide access to various heritage sites. The 5km red marked loop which is mainly on level ground; a 8.5km blue marked loop over the 12 O’Clock hills and a 13km purple marked loop which includes the 12 O’Clock Hills and  Loughavarra Hill. 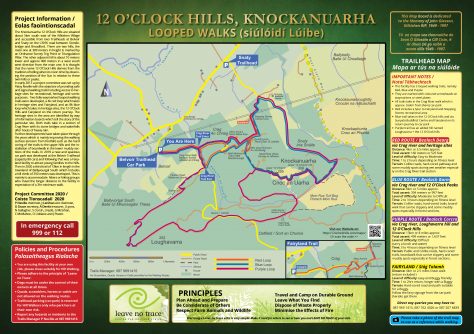 Heritage sites which can be visited along the trails include the restored Crag River Bridge and the partly restored Mary Anne’s stone cottage. Other heritage sites include the ruins of Dysart Lyons and Brohan’s homesteads, a famine road, Mion Rua bog, the Mass Place and the Stepping Stones. There is also a Fairyland facility for young families and a Kindness Rocks trail with a mental health theme.

Traces of an Older Landscape 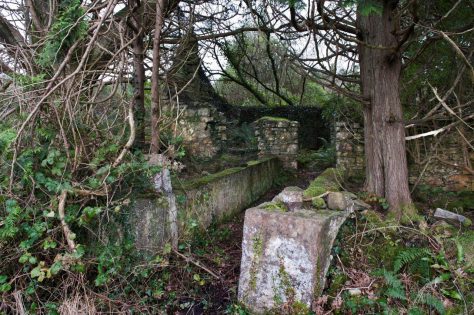 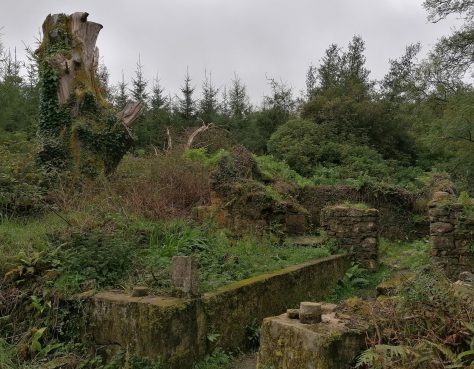 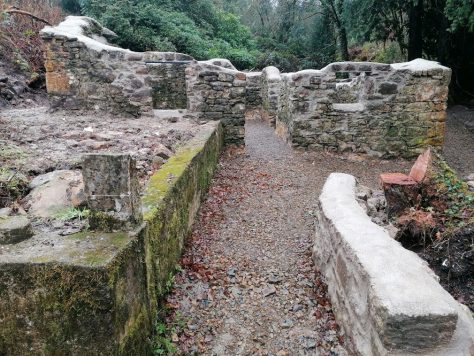 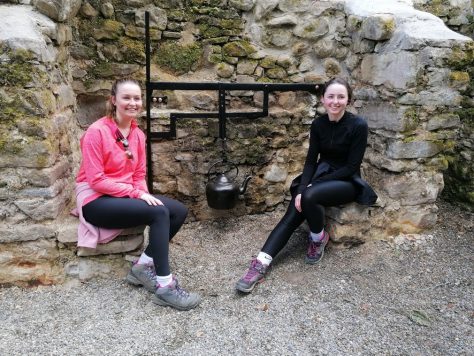 Visiting Mary Anne’s Cottage. The theme with our restoration project in the 12 O’clock Hills is to create a picture of how life was growing up in the mid 1950’s.

The walking trails are mostly located in the townlands of Belvoir, Crag, Snaty Wilson, Snaty Massy and Ballyvourgal. Belvoir is low-lying on the banks of the O’Garney River and was the residence of the Wilsons, the former landlords of the area. Unusually, the Wilsons were Catholics. They became the Wilson-Lynchs when the family inherited land in Co. Galway. Crag is the next townland, somewhat higher than Belvoir. The land in Crag is of middling to poor quality. An extensive dry-stone wall was built of sandstone, the remains of which can still be traced separating the lower good land from the upper poor land. The selection of the walking routes was helped by the existence of a roadway, now in poor condition, running in a north-west to south-east direction between Belvoir and Oatfield.  This roadway was built during the Famine to provide employment to starving people. Another road was started, running from Crag in a southerly direction towards Cooleycasey. This road was not finished. However, the track of the road can be seen and walked. On this road one can see, with difficulty, the ruins of a settlement cluster which once had 12 houses and two lime kilns. Also, a short distance from here on the opposite side of the road is the ruins of a substantial dwelling in the trees. From Crag, a road was proposed to run in a north-easterly direction through two settlements clusters towards Broadford. This was not built. It is clear that a significant population lived and worked in the area at some stage. Modern maps give very little clue as to where the population lived as the area we are looking at is now forestry with open areas of bog and heather on higher ground. We have to go back to the 1840s and work forward to see to see where the population lived and who they were. 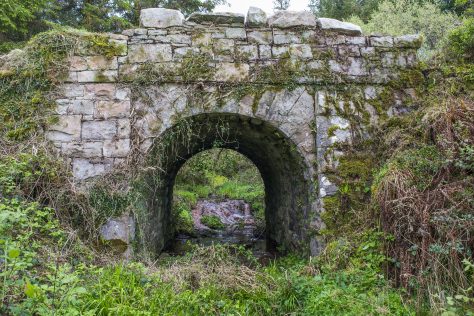 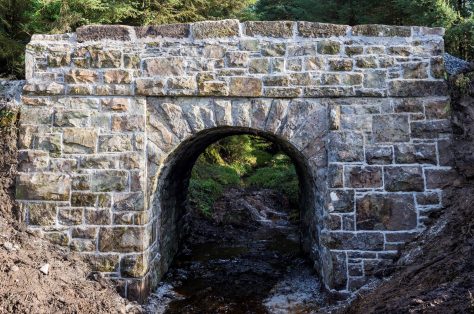 In the 1840s, ‘50s and ‘60s, the parliament in London authorised the preparation of extensive studies and surveys of the condition of Ireland. The Ordnance Survey produced a set of 6 inch to 1 mile maps for the whole country, publishing Co. Clare in the 1840s. These maps were updated in 1893 to a scale of 25” to 1 mile. Accurate censuses were done for 1841, ’51 and ’61.  During the 1840s, Sir Richard Griffith supervised the carrying out of a property tax survey, now widely known as Griffith’s Valuation. This survey produced tables of peoples’ names, land acreage and valuations. The tables were cross-referenced to plots marked up in red on the newly published OS 6” maps.

The population decline between 1841 and 1851 was very rapid due to the Great Famine of 1845 to 1852. The decline continued as landlords no longer wanted the trouble of collecting rent from very hostile people and herds of animals were more profitable. In addition, the rents on properties with a valuation of less than £5, as calculated by the Griffith surveyors had to be paid by the landlord. In our area, this represented about 20 acres of mountainous land. The landlords naturally did not want to do this and so landholders who survived the disease and starvation of the famine were encouraged to emigrate. Former small plots were combined into larger units and then rented out.

The number of houses also declined as there was nobody available to re-occupy them once they were empty. They were used as animal sheds by the people who survived and were allowed to rent land.  The chart below shows the decline in house numbers. Dividing the population number of a townland  by the number of houses in the townland gives an average number of people in each house. This works out at between 5 to 6 people per house. Of course, house is a misnomer. The majority of dwellings were single roomed, with all domestic functions happening in that room.

The present population of our area is about 100 people, with almost all living in low-lying Belvoir.   Forestry covers most of the higher parts of the area, with bogs and mountainous heather-clad wet soils at the highest level. The last four families moved out of the high land in the 1970s . The location of three of these houses are on the walking trail route and may be visited. And, to end on a positive note, the fourth house has been restored and has been re-occupied.

How to find us 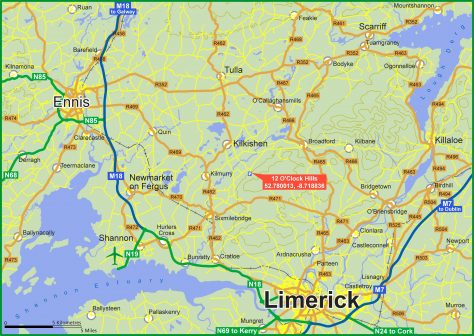 Location map for the 12 o’clock Hills

Coillte for facilitating the 12 O’clock Hills project within their property and the other landowners – the Bliss, McInerney and Heffernan families,

Ellen Solan  for her work in developing the Kindness Rocks trail,

and other funding providers including Local Government, Trust Funds, Businesses and our fantastic supporters for their regular online and manual donations.