Terryglass Woods in the Townland of Clogher

The lowland to the east of Tulla is rich in native broadleaf trees. They support a wide variety of life. Many of the trees are in hedgerows and many are in small woods. A lot of the woods are on the former demesnes of the big houses. That woodland was planned and planted. But some woodland is wilder and seems to have grown up when man wasn’t looking. This is the story of one such woodland, its rise, its (almost) fall, and how it was named in so far as it was ever named.

The green areas on the right-hand side of the map represent woodland existing in the early 1900s (the map is from the 1940s, but is based on earlier maps rather than new mapping).
(British War Office GSGS One Inch Map 1941-43 Reproduced with the permission of the National Library of Scotland)

I first heard the name ‘Terryglass wood’ used by Mary Towler. ‘Terryglass wood’ is what Mrs. Meehan, Mary’s national school teacher, would call the hazel groves in the western part of the townland of Clogher. Mrs. Meehan would bring the children from Fortane National School to collect hazel nuts in the autumnal woods in the late 1940s and early 1950s.

Terryglass is a ‘sub-townland name’ or ‘minor placename’ that is to say a name for a place smaller than a townland. Terryglass is from the Gaelic Thír Dhá Ghlas meaning land of two streams (my source for placenames is logainm.ie – Placenames Database of Ireland). In the old Ordnance Survey maps Terryglass does not indicate the location of the woods rather it is a name given to a farm to the south, where there are indeed two streams. Sub-townland names are sometimes the names of farms or the names of small clusters of houses. Derrymore and Terryglass are the two sub-townland names in Clogher townland in the first edition six-inch Ordnance Survey map from 1839. In the Tithe Applotment Books from 1827 there is no townland of Clogher in the parish of Kilnoe. In 1827 only Terryglass and Derrymore are listed, with Terryglass spelt Tieraglass. At this time Terryglass was listed as in the possession of Daniel O’Connell of nearby Kilgory house. The name Terryglass is not usually used today.

The Rise of Terryglass Woods 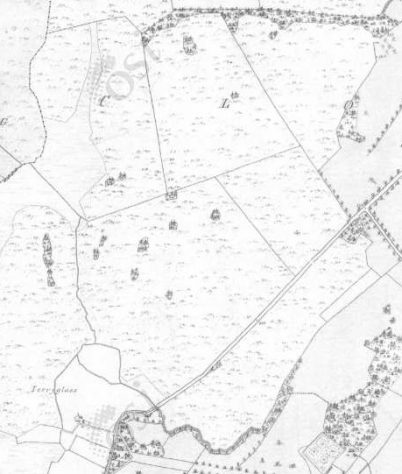 The Landscape in 1839 shown on the first edition 6-inch Historic OS map. Data from base map accessed through the Heritage Maps Viewer at www.heritagemaps.ie, 26/06/21.

The changing extent of woodland can be seen in the historic maps. This change relates to both social history and to the physical nature of the land itself. 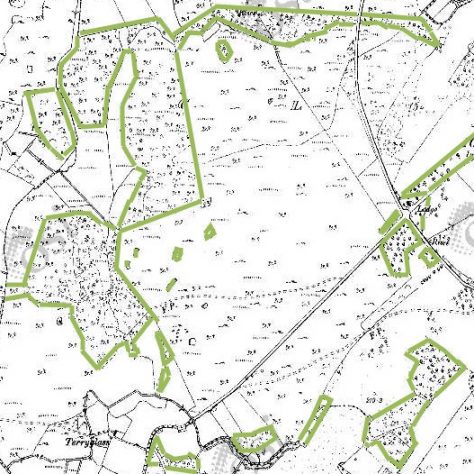 The Landscape in 1921 shown on the Cassini 6-inch OS map with prominent wooded areas outlined in green. Data from base maps accessed through the Heritage Maps Viewer at www.heritagemaps.ie, 26/06/21.

The second edition OS 6 inch map from 1921 shows a much greater extent of woodland and scrub, I outlined the prominent wooded areas in green.

The wooded areas to the north-east of the map (or the top right-hand corner), and to the east and to the south are associated with demesne planting – Kilgory house to the south, Derrymore house to the east.  There are woods in those places on both the map from 1839 and the map from 1921. The markedly straight-line of trees near the top of both maps is alongside what seems to be an unfinished demesne wall – it marks a boundary of the Gore and O’Connell properties. 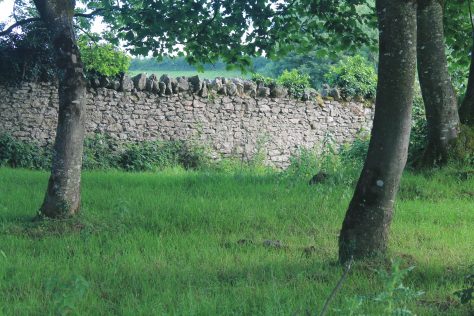 If we look at the Valuation Books (dating from the 1850s onwards), we can see that the townland Clogher was divided between two estates – O’Connell and Gore —the map extracts above are mostly of the Gore estate. Much of this area was divided into two holdings on the Gore estate – one rented by Dennis Slattery and one rented by Matthew Boland. Both the Boland and Slattery holdings were large grazing farms in multiple townlands, something which would often be actually farmed by herdsmen rather than the tenants. 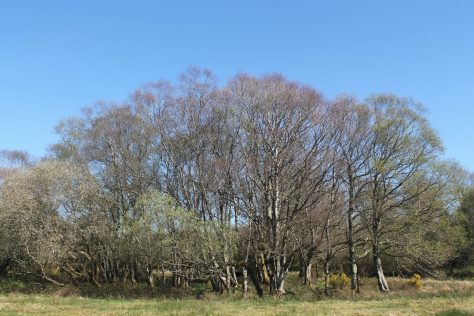 Birch is a typical tree of wet, peaty soils.

In Clogher the Slattery holding was 155 acres and Denis Slattery also had 138 acres, a house and a herd’s house in the adjacent townland of Fortane Beg. Likewise, Matthew Boland seems to have had several land parcels in the neighbourhood. A herd’s house is listed as being on the Boland holding in Clogher.

Most of the wood came to be on the Slattery farm. So there might have been circumstances particular to the Slattery family, but there was also a bigger picture. 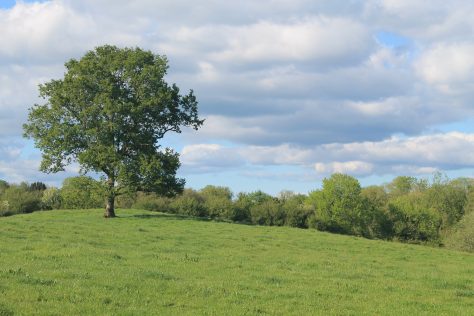 An oak tree in a field named Drumeen

Before the Great Famine there was a larger population and more intensive use of the land — people had to use whatever they had, or could get. In the 1880s large grazing farms like those of the Bolands and Slatterys became less profitable as new technologies allowed imports from outside Europe. The first refrigerated ship carrying meat from New Zealand arrived in Britain in 1882. Profit margins may not have justified much land reclamation. 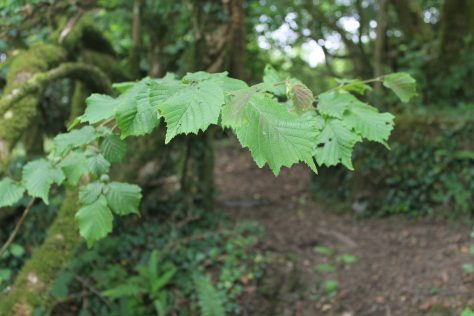 But there is also the physical properties of the land itself — which can be summed up using the field names Riasc, Drumeen and Crag. Riasc meaning a wet marshy place, Drumeen meaning a small hill, and Crag meaning a stony place. Often, but not always, the wooded areas in this district are the crags. Full of rocks and difficult to keep clear they fill up with hazel trees. Indeed, the townland name Clogher is from the Irish Clochar which also means stony place. 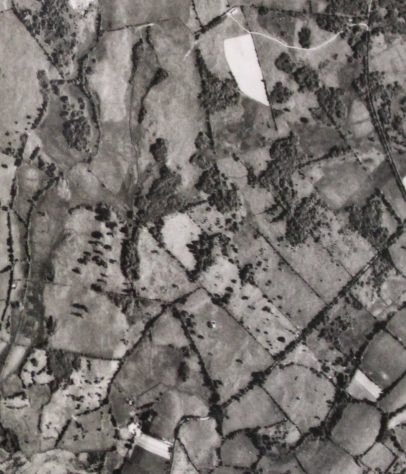 The 1973 aerial photography shows less tree cover than in 1921 and also sometimes the tree cover is in a different place in 1973 than it was in 1921. There are changes between 1973 and today but a lot of clearance happened before then – there is more difference between 1921 and 1973 than between 1973 and today. So this change happened before the farm modernisation grants of the 1970s and before Ireland’s entry to the Common Market.  The distinctive rectangular fields in the centre-right of the photograph are the divisions made by the Land Commission in the re-distribution of farmland. The land was now in the hands of people who had less resources in the way of money and more resources in the way of labour in comparison to the previous owners and tenants. 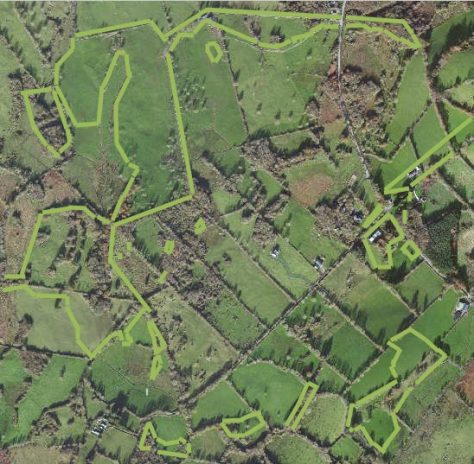 The landscape today – the areas outlined in green were under trees in 1921. Data from the Digital Globe accessed through the Heritage Maps Viewer at www.heritagemaps.ie, 26/06/21.

A Schools Folklore Collection c.1938 account from Bodyke school explains what happened in the Gore property on the neighbouring townland of Ballinahinch:

“. . . the land is divided up amongst the people. Many people from congested districts in the mountain parts of Tulla and Feakle were brought in.

The large houses were pulled down and comfortable houses were built for the new tenants or rather proprietors because they are all under the Land Commission. 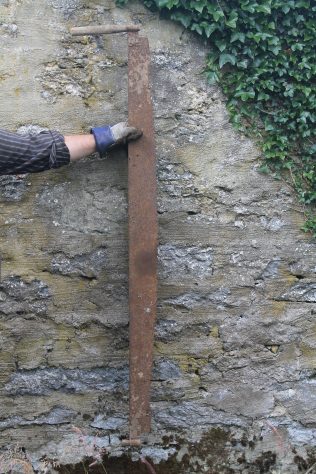 Cross-cut saw – the hand tool used to cut down trees before the availability of engine-driven chainsaws.

The lands were well wooded and, of course, the new tenants, delighted to be able to realize ready money, cut down almost all the trees and sold them by the load.”

That was 1938. There would have been even more use of the wood resource in the next few years – when the ‘Emergency’ of the Second World War interrupted coal imports. And then after the war the wet summer of 1946 made it hard to save turf and that was followed by the harsh winter of 1947.

Terryglass Woods in the Irish Revolution

If we look at what was happening in the area in the era of the Irish Revolution (1911‒23) we can understand how it came to be that the land was divided up and re-distributed. There was a series of cattle drives on disputed properties in Clare in the opening months of 1918.

On the 21st of January 1918 the Limerick Leader reported:

“A cattle drive on an extensive scale is reported from East Clare, where on Thursday about 150 stock were driven off the lands of Derrymore and Ballinahinch, belonging to Mrs Gore, the widow of the late General E A Gore. The cattle were driven all over the district, as far as Killaloe on one side, and Broadford on the other, and police went from Ennis to assist the search for them.”

Much the same went on in the spring of 1920 – then more to the north of here though on the East Connacht plain of Galway, Roscommon and Mayo. Hence the land re-distribution by the Land Commission under the Land Acts of 1923 and 1932.

But woods played a role in the ‘troubled times’ too. There was a sawmill on the Gore estate which supplied the British Army with building materials for the trenches in France.  So it is likely what we see on the maps from 1921 was already by then a reduced amount of tree cover.