Cratloe is a small rural village in County Clare situated between Limerick and Shannon. The word Cratloe is derived from Croitshliabh meaning “hump-backed hill” referring to Woodcock Hill or Creat Shaileog meaning “the rough land of the sallow trees” (The Schools’ Collection, 2021).

Foundation of the Church 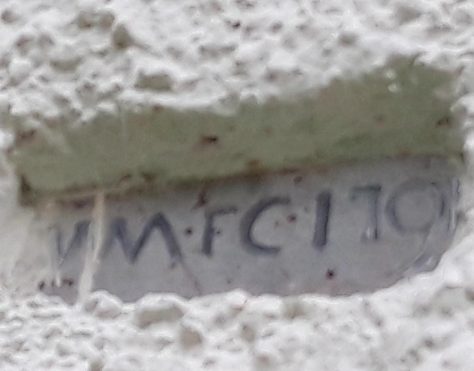 St John’s church is the Roman Catholic parish church of Cratloe Co Clare. It was built in 1791 under the instruction of Fr James Ward, the parish priest, as a chancel and nave church. (Mac Bradai). A date stone located in the exterior wall beside the doorway into the nave is inscribed VM FC 1791. 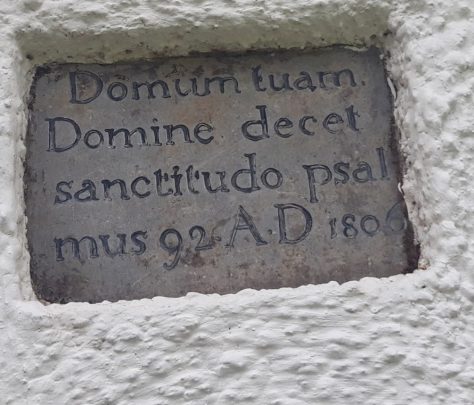 In 1806 two transepts were added by his successor Rev. Jeremiah Cronin (Ryan, 2021) making the plan of the church T- shaped. A datestone over the entrance doorway in the south transept commemorates this event.

In 1975 a report titled ‘Areas and Sites in Co Clare of Historic and Artistic Interest’ was compiled by the well know architect Maurice Craig and architectural historian William Garner.  They described St Johns’ church as follows:

‘….a small, low T-shaped barn church, the exterior is lime washed with good fenestration; round headed clear glass windows and original slate roof. The interior has a fine early 19th century reredos altar with marbleised columns, also a side chapel on the south side similarly treated, also three bow shaped galleries, this is an exceptionally fine example of an early barn church and to “their” knowledge one of the finest in the country.’ 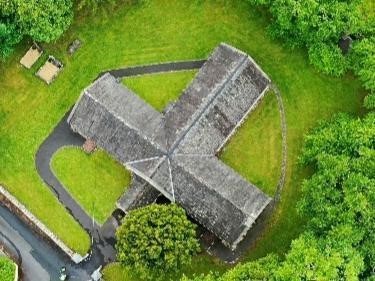 It is one of only a handful of remaining ‘barn’ churches in Ireland built during penal times, when Roman Catholics were not allowed to practice their religion. It is a protected architectural structure under the National Inventory of Architectural Heritage and the Record of Protected structures compiled by Clare County Council.

In 1828 Daniel O’Connell, an MP for County Clare who would later go on to be known as The Liberator, made a speech outside the church about the Catholic Emancipation Act, arguing that Catholic Members of Parliament should be allowed take their seat once elected, which was forbidden at that time. (Limerick Diocese Heritage)

This architecturally important pre-Emancipation, barn style church retains many of its original features and also has a medieval doorway from an earlier parish church inserted. 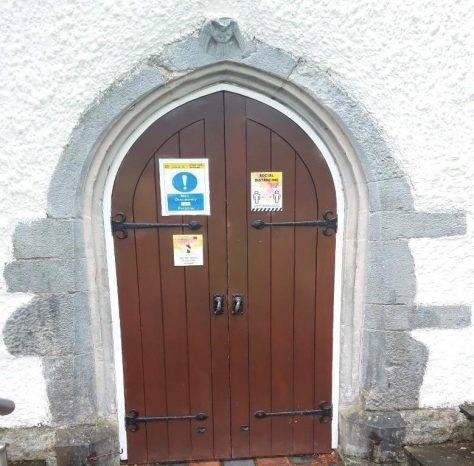 Carving at base of Medieval Door

The entrance doorway to the north transept is a carved, limestone arch with mounded orders.

This doorway is thought to have originally been part of Kilfintinan Medieval Parish Church which stood in Ballybroughaun townland or Crughaun Church in Ballinphunta townland. Its origin is uncertain.

The central arch stone has a carved full figure of a robed angel with large wings, carrying a book.  The figure is damaged and the detail is hard to determine due to painting of the stone. It may represent St Uriel, the archangel, who is often depicted carrying a book as a representation of his wisdom.

At the base of the doorway on the left hand side is a carving of what appears to be a crown-like device with a central steeple type structure with a knop at the top.

Inside the medieval doorway to the left is a carved limestone holy water stoup.  It has been set into the wall but appears to be square in shape with a round bowl. On one of the outer facing corners of the square there appears to be a carved face.

There are two other square stoups set into the Church walls, located inside each of the other entrance doors. Both are limestone blocks carved into square shapes with round bowls.  Above the font in the south transept is a very interesting carved head.  It appears to be a female with an elaborate headdress or hairstyle.

As the church is small, the altar and reredos appear quite large. Both are unusually constructed of wood and are painted white.  The central section of the reredos is decorated with an ogee style design to the arch and this is repeated in the central front panel of the altar. The side sections of the reredos contain two round headed alcoves,of unequal size, where statues are placed.  To the left is Mary the Mother and to the right is St Joseph holding the Child Jesus. The alcove on the right is smaller as it has been adjusted to fit the sacristy door beneath.

In the centre of the reredos hangs a plain wooden cross with an Icon of the Holy Family at its base.

St Therese of Lisieux side altar

Set in the south wall of the nave is an alcove with a statue of St Therese of Lisieux set on a pedestal.  The pillars, architrave and railings which enclose the alcove are painted in a marbleized patter of greens and browns.  The interior walls are covered in a painted paper which creates the illusion of ogee headed panels with floral design insets beneath a dado rail and a pattern of fleur-de-lys and the interlaced initials of St Therese above. 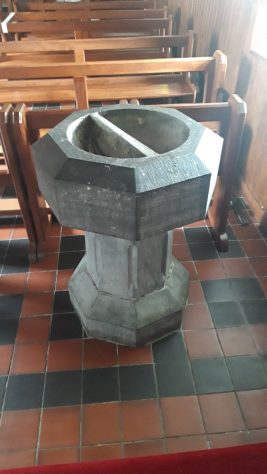 Standing to the north side of the altar is a freestanding, limestone baptismal font.  It consists of an octagonal bowl on pedestal.  Within the bowl is a drainage hole to allow the blessed water to drain into the sacred ground of the church after baptism has taken place. 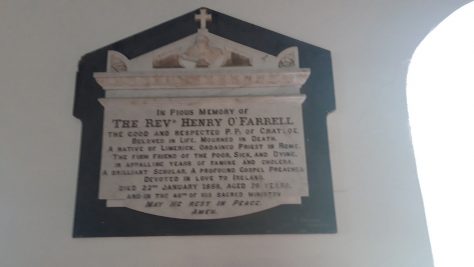 In the north transept is a marble memorial plaque to Fr Henry O’Farrell who was the parish priest from 1864 until 1886. Fr O’Farrell is commemorated on this plaque as a priest who worked hard for the poor and the sick during Famine times.

In Memory of a Poet

There is also a plaque to the poet Donnachadh Ruadh Mac Conmara who was born in Balintlea Castle, Cratloe on the exterior wall of the church. Donnachadh wrote a famous poem which featured on the leaving certificate in the 1950’s ‘Ban Chnoic Eireann’. (Danagher, 2021)

The Church bell, is located on the gable of the north transept.  The inscription tells us that it was cast in Dublin in 1857 for Fr Johannes Bourke PP in Murphy’s Foundry. 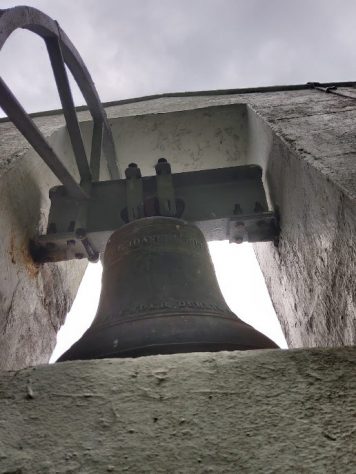 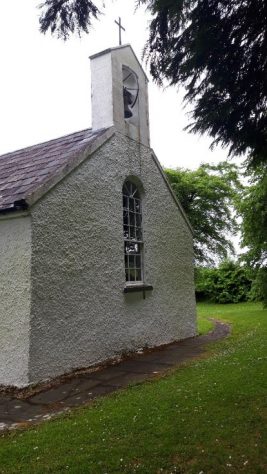 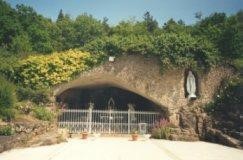 In the 1930’s a replica of the Lourdes Grotto was built on a six-acre site adjacent to the Church. The parishioners arranged the work according to townlands and the residents of each townland worked at the grotto for one day a week over a period of four years (Clare County Library, 2021)

Gates to the Lourdes Grotto

The entrance gates to the grotto came from a gentleman’s house in Clooney, Quin Co Clare 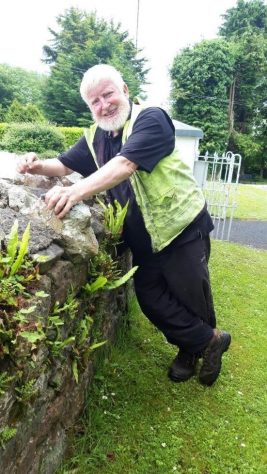 To this day in the parish volunteering is crucial for the upkeep of the Church and Grotto.

The church was re-roofed in the 1950s and the original slates were put back on the roof. Fr Micheál Liston carried out more work on the church in 1990.

St Johns Church has been popular for a number of celebrity weddings including Sharon Corr from The Corrs and Fergal Lawlor from The Cranberries.

Ryan, W., (2021) A survey of Monuments of Archaeological and Historical Interest in the Barony of Bunratty Lower, Co Clare. Accessed on 14th June 2021 https://www.clarelibrary.ie/eolas/coclare/archaeology/ryan/part5_chapter50_cratloe.htm